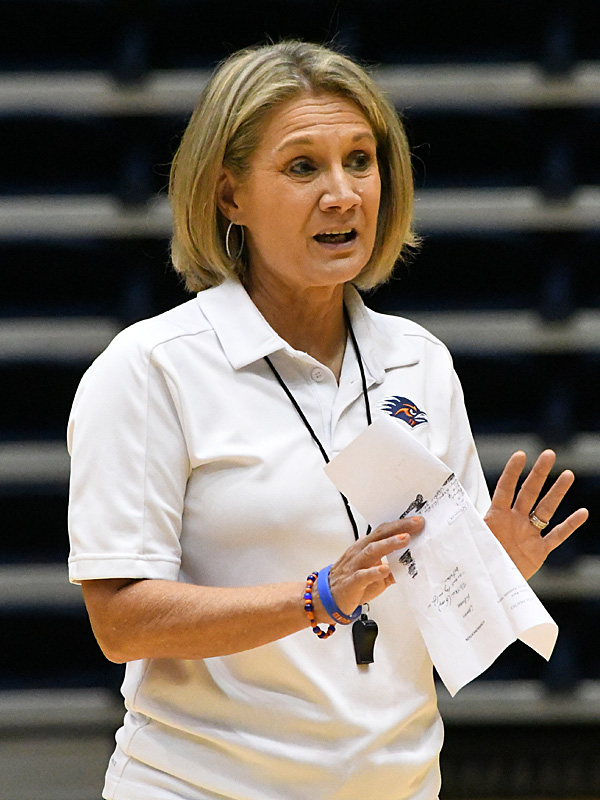 Karen Aston has added some talented new players to the roster for her second season at UTSA . – Photo by Joe Alexander

The second season in Karen Aston’s tenure at UTSA opens in one of the most iconic locales in the state for women’s basketball.

Aston’s Roadrunners are set to play today in East Texas at Nacogdoches. They’ll tip off at 5:30 p.m. at Johnson Coliseum, affectionately known as “The Sawmill,” the home of Stephen F. Austin Ladyjacks.

Leading a team with a revamped roster, including eight newcomers and five freshmen, Aston will face a daunting challenge. The Ladyjacks have won 100 games over the past four seasons. They’ve won back-to-back regular-season championships.

The first of the two titles came in the program’s last year in the Southland Conference, in 2020-21, followed by another championship last season in the Western Athletic Conference. After both seasons, the Ladyjacks reached the NCAA tournament.

Last year, SFA finished 28-5. In an interview last week, Aston suggested that it wasn’t ideal for her team, with so many freshman, to play against such an established program in the opener.

“I mean, for this particular team, would it have been better to have a home opener and settle in a little bit, since we didn’t have an exhibition game,” she said. “Yeah, I definitely think that. We had an exhibition scheduled and then it got canceled.

“I think it would have been good for this team to play under the lights (at home). But, you know, it didn’t work like that, and we’ll do our best to be as competitive as we can be.”

Last year, as the former coach of the Texas Longhorns laid the groundwork for her program in San Antonio, it was a struggle for much of the season. Aston’s Roadrunners lost by 27 points at home to SFA in the opener. They went on to finish 7-23.

This season, the Roadrunners have upgraded the talent level, adding transfers Jordyn Jenkins and Kyra White from Southern Cal. Freshman Sidney Love, the player of the year in San Antonio at Steele last season, is also expected to play a significant role.

“Well I think the players are ready to play, regardless of what goes good or bad,” Aston said. “Really, at this point, you just need to play. The monotony of practice and what you’re doing every day in practice is sort of at an all-time high until you play a game and get in front of a crowd and see if the things you’ve been working on are, you know, (whether) you can be successful with those things.

“Do you need to make changes? I mean, none of those assessments can be made until you get in there and play a real game.”