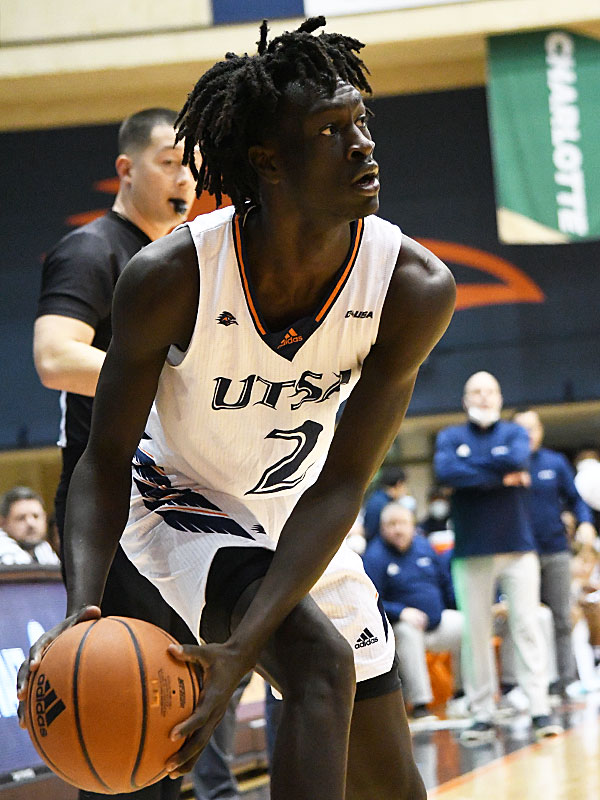 Forward Aleu Aleu says UTSA is ready “to surprise the outside world” as the new season opens Monday night with a home game against Trinity. — File photo by Joe Alexander

The video did not lie. About five minutes into an exhibition game at the Convocation Center last Wednesday night, the UTSA Roadrunners imposed their will to create a highlight-reel moment. The play was significant for a few reasons.

First, it started with a drive to the bucket by Japhet Medor, a 6-foot newcomer who has shown on numerous occasions a knack for bringing out the best in his teammates. As Medor drove to the bucket on the right side, he threw up a floater that caromed off glass and rim. From there, 6-9 Josh Farmer made a play on it, tapping it out. 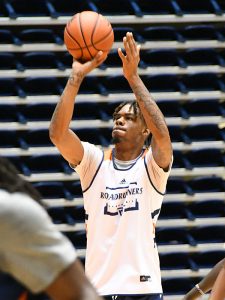 Josh Farmer, a 6-9 sophomore from Houston, is regarded as one of the team’s most improved players. – Photo by Joe Alexander

Lamin Sabally, at 6-8, grabbed the ball and promptly dished under the basket to Aleu Aleu. In the chaotic aftermath, a few Schreiner bodies went down like bowling pins, and the 6-8 Aleu powered up and threw down an emphatic, two-handed dunk. It was an energy play that reverberated for, basically, the rest of the half.

For the next 15 minutes or so, the Roadrunners outscored the outmanned Division III Mountaineers by 28 points. Schreiner was lacking athletically in many ways against UTSA, as expected, but it still was a good sign for the home team to see a play unfold with such dramatic effect.

“You seen the game,” Aleu said. “It was back and forth for a little bit. Then you (saw) me, Josh and Lamin come in, and coach told us to pick it up. So we got a lot of stops and converted on the offensive end. Really glad we could bring the energy. That’s what we’re here for, and we’re going to continue to do that.”

After downing Schreiner 93-60 in the exhibition, UTSA hopes to continue pressing the action, and Monday night, the regular season starts for real. Once again, the opponent is a Division III foe. It’s the cross-town Trinity Tigers, in the house for a 7 p.m. tipoff at the Convo.

Most of the attention in UTSA camp since the players reported for fall semester duties has centered around Medor and John Buggs III, two transfer guards who seem to have solidified the entire program after a 10-22 season a year ago. But in the wake of the Schreiner exhibition, the potential for the long-armed trio of Aleu, Sabally and Farmer has sparked some discussion, as well. 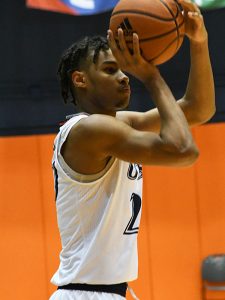 Lamin Sabally, a 6-8 sophomore, is bidding to play a bigger role after averaging 12.3 minutes last year. – Photo by Joe Alexander

While the three of them had a limited impact last season, the potential now seems pretty clear. If they can learn to play under control and play without fouling, they could give Henson all sorts of options on personnel groupings moving forward.

Henson and staffers talked to each player individually and to some in groups recently. The discussion centered on roles. With the three fowards, Henson said, “We kind of challenged ‘em collectively. (We asked) what would happen if you three went to the scorer’s table together and walked in, arm and arm, and said, ‘We’re going to make a big impact on this game with our defense and our length.’ ”

Aleu said the players got the message. They’ve been having good practices in that vein for several weeks now, anyway. “We kind of processed it, like, ‘OK, these are three long guys,” he said. “All quick. All can jump. All athletic. Can move. Can play defense. And we just … we get in the game and it’s hard for people to score.

“At practice, looking back on it, every time we’re on the court together, it’s hard for the blue team to get in their offense,’ Aleu added. “We’re blowing everything up. Josh is protecting around the rim. It’s a pretty good lineup, pretty big. With Japhet and Buggs and the three of us, we just shut everything down. We definitely take pride in that.”

For Aleu personally, this is a season in which he’d like to make up for lost time. Last season, he played in only 10 of 32 games, limited by right knee and left quadriceps injuries in the fall and then later, another right knee injury in January that knocked him out for the season.

It was an ordeal that tried his resolve. Aleu acknowledged that it was tough to make it through the days following the injury, which happened in UTSA’s Jan. 15 road game at Charlotte.

In explaining his situation, Aleu said it was a “bucket handle” meniscus injury to his right knee. He said it was his understanding that if the meniscus had been removed, he might have faced a knee replacement in two or three years.

“So the best thing to do is repair it, and just stitch it back together,” he said. “That’s what kept me out for so long. You got to let it heal. It took me about seven months to rehab. We went into the summer and Ji (trainer Jiana Hook) told me we’d just take our time with it.”

Aleu acknowledged that it was difficult to make it through the days following the injury, which happened in UTSA’s Jan. 15 road game at Charlotte. It was also painful to sit and watch the team implode at the end of the season.

“It felt bad just to sit there and watch my teammates go through what we went through,” he said. “So, I’m just happy to be back and (I hope) to do whatever I can to help the team, and not repeat what happened last year.”

Aleu’s return to full speed progressed gradually. He was limmited in late August and September. By the start of official preseason drills, the native of Kenya, who played in high school in Austin and in junior college at Temple, had ramped up to full-speed work.

A few weeks ago, Aleu raised eyebrows when he caught a pass on the fast break and tried to tomahawk dunk over freshman Massal Diouf. The ball didn’t go down, as Diouf hustled back to get a piece of it. But UTSA teammates took notice.

Henson said he was impressed with how hard Aleu practiced last month after being out for so long in rehabilitation.

“Then he had a stretch where he was shooting the ball so well,” the coach said. “(If) he mixes those two things and carries the shooting over to the games, he could have a huge impact for us. Because, he can play a couple of positions. He can guard multiple positions. Can pass it. Attack. Block a few shots. Rebound it. Defend.

“So, transitioning it from practice to the games, is kind of the key there.”

Aleu said he’s encouraged by the team’s play in general.

“Our confidence is pretty high,” he said. “I think that goes back to the guys around you. Everybody’s pretty supportive of each other. We encourage everybody to play their game and be themselves. That makes everyone feel confident. We’re past last year. But it’s, like, in the rear-view mirror. We also still think about it sometimes. It fuels us to keep getting better.”

If the Roadrunners win this year, it won’t be a surprise to them.

“For sure,” Aleu said. “We know what we can do. We’re ready to surprise the outside world, for sure. I think it’ll be a good season, and we won’t be surprised at all. We all know the work that we put in. We all know the sacrifices we’ve made.”