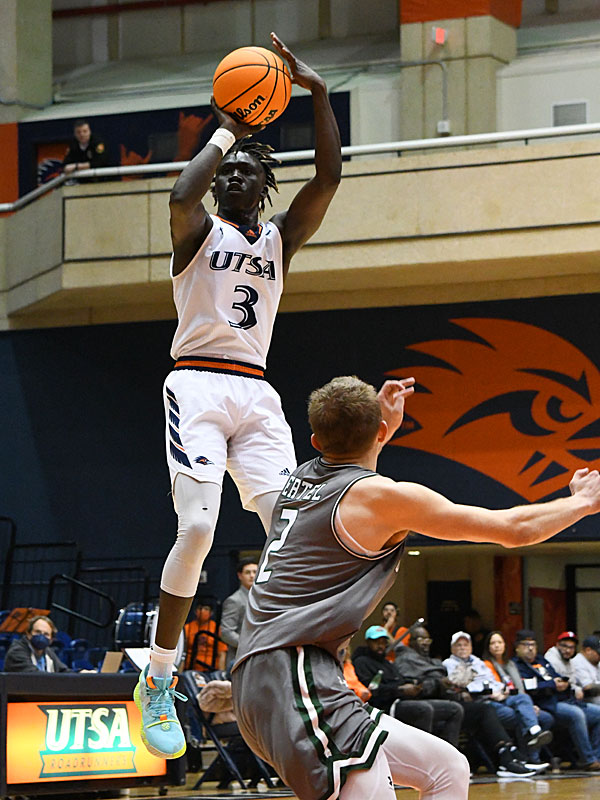 Guard Dhieu Deing came off the bench to lead the UTSA Roadrunners with 16 points Thursday in a 68-56 loss to the UAB Blazers. – Photo by Joe Alexander

The UTSA Roadrunners sank six three-pointers in the first half and played the powerful UAB Blazers to within seven points at halftime.

After that, the shots did not fall as frequently as they would have liked.

As a result, the bigger and more athletic Blazers claimed a 68-56 victory at the UTSA Convocation Center, winning their 21st game of the season, while handing the embattled Roadrunners their 20th loss.

It is UTSA’s first 20-loss season in six years. 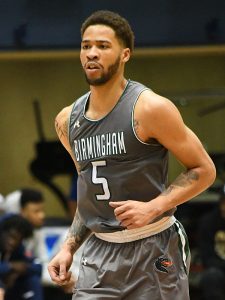 Forward KJ Buffen led the Blazers with 16 points. He hit 6 of 12 from the field and 4 of 5 at the free throw line. – Photo by Joe Alexander

The Roadrunners dug themselves a hole with 12 turnovers in the first half, allowing UAB to step up the pace of the game.

“We got to do a better job taking care of the ball, getting in the paint better and being stronger with the ball,” guard Erik Czumbel said.

The Blazers dominated the game inside, as they produced a 42-24 margin in points in the paint.

In the first half, the Roadrunners stayed within reach by hitting 6 of 12 on three point attempts. After intermission, they made only 2 of 10 from behind the arc. 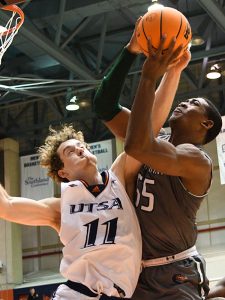 The Roadrunners were without high-scoring guard Jordan Ivy-Curry, who left the team on Tuesday and entered the transfer portal.

Ivy-Curry’s departure was the latest in a series of distractions that have haunted the team this season, but Czumbel said players are dealing with them.

“I think we’ve handled it the right way,” he said. “We keep sticking together. We have a bunch of good guys in our locker room. That’s not an issue. We just got to lock in on the basketball side of things.”

With the loss to the Blazers, the Roadrunners fell to 9-20 on the season, hitting the 20-loss mark for the first time since a Brooks Thompson-coached 2015-16 season, when they finished 5-27.

“We just got to stay together, keep being positive,” Czumbel said. “We still have a shot. We have chance to win the tournament. Anything is possible. We just got to get on a roll these next few games.” 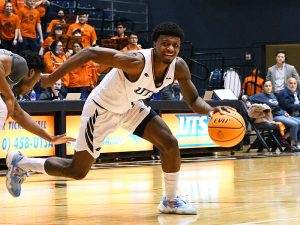 UTSA guard Darius McNeill produced eight points and two rebounds. McNeill played 33 minutes in the absence of Jordan Ivy-Curry, who has left the team and entered the transfer portal. – Photo by Joe Alexander

“We got tough opponents ahead of us,” Czumbel said. “That’s the good part. We have to face up to really good teams. It’s a challenge every night. I think we can improve and get ready for the tournament.”

The Blazers made the most of their speed and athleticism, scoring 10 points on fast breaks as they assumed a 37-30 lead at intermission. UAB held a 22-10 edge in points in the paint.

UAB took control early in the half with a 13-0 run. The spurt lifted the Blazers into a 26-14 lead when Ertel hit a shot in the paint with 8:35 remaining.