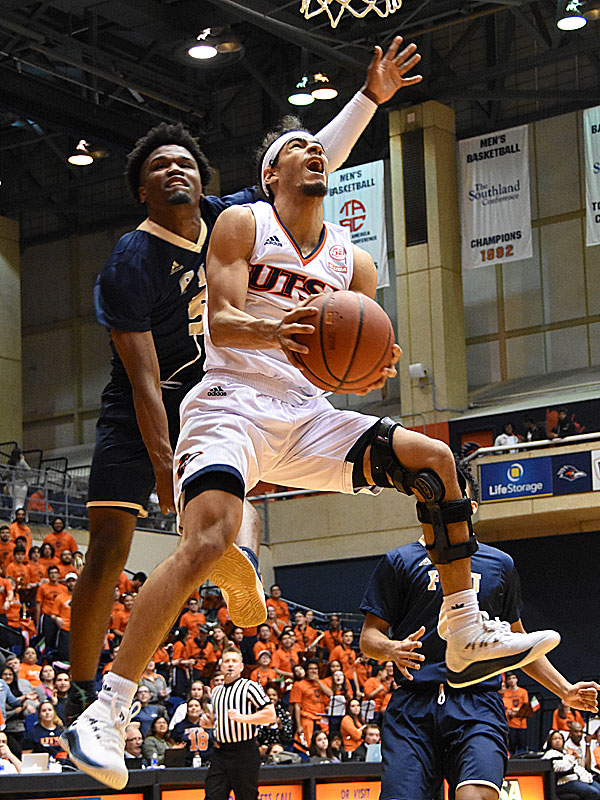 Conference USA scoring leader Jhivvan Jackson says UTSA is ready for heightened competition in the next six regular-season games, including the last four in ‘bonus play.’

The UTSA Roadrunners knew immediately after Saturday’s victory over Florida Atlantic that they would have a good chance to qualify for the top tier in Conference USA’s new ‘bonus play’ format.

After the results of other C-USA games rolled in Saturday night, it was confirmed.

The Roadrunners have clinched a spot in regular season-ending, round-robin play involving the top five teams in the conference standings, a school spokesman said in a text Sunday.

As a result, the Roadrunners will play at Southern Miss on Thursday and at Louisiana Tech on Saturday, before getting slotted into a two-week, four-game bonus play schedule against the rest of the best in the conference.

C-USA scoring leader Jhivvan Jackson said Saturday that he believes the Roadrunners will be ready to stand up to what promises to be a rigorous test of their ability.

“We’re prepared for our next one,” Jackson said. “We take it one at a time. But, I mean, our team is really prepared. You know, our preparation for the games is outstanding. We key in on things that a lot of teams don’t key in on. I mean, we just come out to the games, and just show it.

“The next six (games are) going to be as tough as any we’ve played, but we’re ready. We’re just focused on Southern Miss right now.”

The schedule for the bonus play round is expected to be sorted out by the conference office after Saturday night. Possible dates for the games are Feb. 23, Feb. 28, March 3, March 6 and March 9.

The C-USA tournament is March 13-16 in Frisco at The Ford Center. The winner of the event in Frisco will clinch the C-USA’s automatic bid to the NCAA Tournament.

Adding sizzle to the top-tier designation, the top five teams in the bonus-play round will be playing for the top four seeds in the tournament.

Getting a top-four seeding would be meaningful for the Roadrunners, who would then be in position to qualify for the NCAA Tournament with three victories in Frisco, rather than four.

It’s a key for UTSA’s team, which relies primarily on a seven-man rotation.

The Roadrunners haven’t played in the national tournament since 2011.