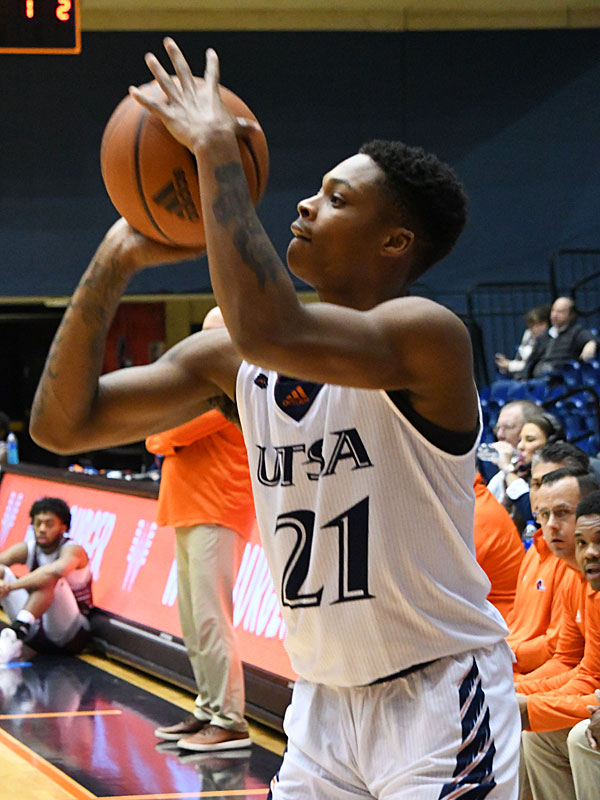 The UTSA Roadrunners needed a game to rediscover their offensive rhythm, and they seized it on Monday night by passing for 21 assists in a 101-48 non-conference victory over the Dallas Christian College Crusaders.

In snapping a troublesome three-game losing streak, the Roadrunners shot 48.7 percent from the field, including 52.9 percent in the second half, to rout the outmanned visitors from the National Christian College Athletic Association.

Only two days ago, the Roadrunners were humbled in a Conference USA game in Alabama.

They lost 87-59 on Saturday to the powerful UAB Blazers. While the Crusaders play at a few levels below the 14 teams in the C-USA, the home game at the Convocation Center still represented a chance for UTSA to work on execution for an offense that has been erratic at best. 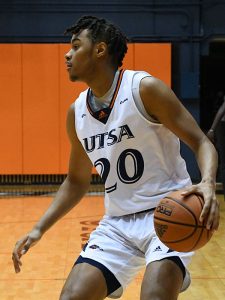 Freshman Lamin Sabally produced 15 points and six rebounds. Sabally was 4 for 4 from the three-point arc. – Photo by Joe Alexander

“A lot of positives,” Coach Steve Henson told the team’s radio broadcast. “A lot things we can take away from it. The 21 assists (were) good. I thought we turned down some pretty good shots for some great shots.

UTSA entered the Dallas Christian game shooting 37.5 percent, including a cool 32 percent over losses to UT Rio Grande Valley, Illinois State and UAB. The Roadrunners responded against the Crusaders by making 19 of 42 afield in the first half, and 18 of 34 down the stretch.

Jordan Ivy-Curry knocked down five 3-point shots as UTSA hit a season-best 17 in 37 attempts from distance for the game. 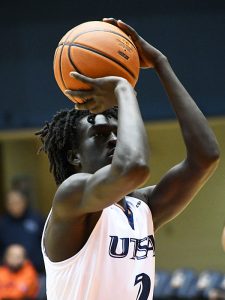 UTSA rolled to a 12-point lead in the opening minutes, bumped it to 43 at the halftime break and increased it to as much as 56 at the end.

While a few players sat out for various reasons, the Roadrunners were looking for any and all players to take advantage of the opportunity to play. Aleu made the most of it, hitting two early threes to get the team going.

“I think I can be the energy guy,” Aleu told broadcasters Andy Everett and Tim Carter on the post-game show. “On defense, come in, guard, get rebounds. (On offense), make wide-open shots. Just kind of that role, whatever is needed.”

The UTSA Roadrunners opened with back-to-back, 3-pointers from Aleu. They went on to hit 12 threes in 24 attempts in building a 55-12 halftime lead. 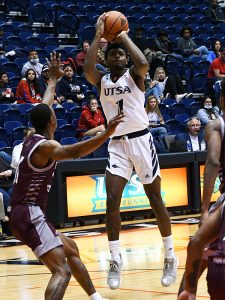 Senior Darius McNeill had 13 points, 9 rebounds and 3 assists off the bench. – Photo by Joe Alexander

Playing with a decided advantage in size and athleticism, the Roadrunners seized momentum by scoring 12 points in a row at the outset. A few minutes later, it was 20-2, and a dozen minutes into the game, they were still rolling, leading 37-4.

Several Roadrunners contributed in the opening minutes, Sabally with nine points, Ivy-Curry with eight, and Aleu and McNeill with seven each. Sabally was 3-for-3 from three-point range.

The offensive outburst, even against an inferior opponent, was a welcome sight for the Roadrunners who have struggled on offense this season. UTSA came into the game averaging 67 points, while shooting 37.5 percent from the field. The Roadrunners were hitting only 26.1 percent from three-point territory.

For Dallas Christian, which plays in the National Christian Collegiate Athletic Association, it was the team’s fifth exhibition against an NCAA Division I program.

The Crusaders have been beaten previously by Texas A&M, Tarleton, Northwestern State (La.) and the University of the Incarnate Word. UIW downed Dallas Christian 90-45 on Sunday afternoon in San Antonio.

Late in the first half, McNeill was helped off the court, assisted by a trainer. The senior transfer from SMU returned to play in the second half. UTSA’s Dhieu Deing, Cedrick Alley Jr. and Phoenix Ford did not play.