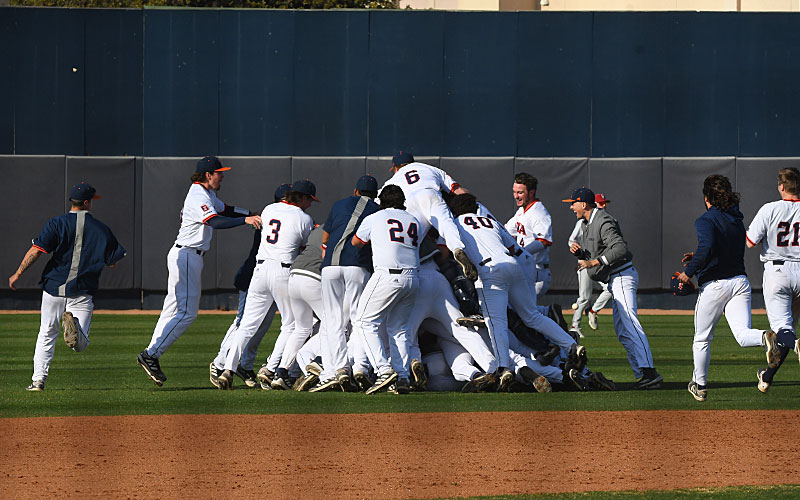 The UTSA Roadrunners mob Leyton Barry in the outfield after his game-winning hit in the bottom of the 10th inning. — Photo by Joe Alexander

The UTSA baseball game at Roadrunner Field on Monday seemingly had it all. Quality weather and sunshine, with temperatures in the 60s. An elite-level opponent, with the nation’s second-ranked Stanford Cardinal in the house. Even quality trash talk in a spirited performance by fans of the home team. 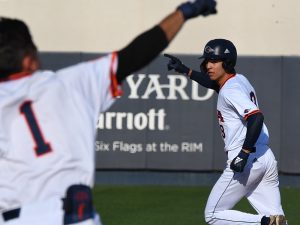 How sweet it is. Leyton Barry reacts to his jubilant teammates after stroking a 3-1 pitch from Tommy O’Rourke into center field for an RBI single, lifting UTSA over a team that reached the 2021 College World Series. — Photo by Joe Alexander

Sometimes, it seemed as if the talk generated heightened performance on the field. For instance, when the Roadrunners loaded the bases with nobody out in the fifth inning and Stanford reliever Max Meier threw three straight balls to UTSA’s Ian Bailey, the fans started a chant.

Meier wouldn’t have it. He reached back to find great stuff, and he struck out Bailey. The next batter, Leyton Barry, hit into a double play, ending a threat that could have expanded a two-run UTSA lead to four or five.

Instead, the Cardinal turned everything around. They tied the game with a monster two-run homer in the eighth, and their bullpen kept throwing strikes and frustrating the Roadrunners — until Barry came to bat in the bottom of the 10th inning, that is.

With runners at first and third and nobody out, Barry ripped a liner that dropped behind center fielder Brock Jones, allowing Shane Sirdashney to race home with the winning run in a 6-5 victory.

Just like that, the Roadrunners, who had let so many one-run games get away from them last year, beat a team that played in the 2021 College World Series. And they beat them by one run, with a key hit to back their own quality relief pitching.

“Good ball game,” Stanford coach David Esquer said. “I thought they played a great game. They did a good job. All their pitchers they brought in threw strikes and kept us off balance. That’s a good club. It looks like (an NCAA) regional team to me.”

Coaches Pat Hallmark of UTSA and David Esquer of Stanford meet with the umpires. https://t.co/hyCDEtJ4sq pic.twitter.com/YEIyrJWOjo

Sirdashney led an 11-hit attack with three hits and two RBI. UTSA (7-1) also got two-hit performances by Jonathan Tapia and Garrett Poston and a 2-RBI double from Chase Keng to down Stanford (6-2) and end the Cardinals’ five-game winning streak.

In the process, they extended their own streak to five.

As for the defense, well, the Roadrunners didn’t make an error, and their seven pitchers held an explosive Pac-12 team to six hits, the biggest blow coming in the eighth on the two-run homer by Carter Graham.

But in the end, it looked as if the Stanford bullpen, featuring lefty Ryan Bruno, who was throwing 95 mph fastballs that tailed away from right-handed hitters, might lock down the Roadrunners and allow the Cardinal to escape with the victory.

“I agree, their bullpen was fantastic,” said Barry, who was 1 for 6 with the winning hit. “But ours was, as well. That’s really the reason why we were able to win this game. Looking up at the scoreboard, Stanford only getting six hits against our pitchers, it’s what led us to the win.

“So you know, our bullpen was, frankly, better than theirs today. Which was fantastic for us.”

Last year, the Roadrunners boasted one of the most explosive offensive teams statistically in the nation and finished 22-26 because the pitching and sometimes the defense would falter. A lot of times it happened in the late innings.

He didn’t allow a hit, walked only one and struck out four.

“We did have a lot of situations similar to this last year, that ended up going the other way,” Barry said. “We have a new team this year. But a lot of the guys are the same. For those of us who were here last year it feels fantastic to have a new energy in games like this.”

The victory was gratifying for UTSA coach Pat Hallmark. His Roadrunners won three games against top 25 teams last year. But, in beating a team ranked No. 2 in Monday morning’s Baseball America rankings, it was the best UTSA victory by opponent ranking since a 2012 game in which it defeated No. 1 Baylor at Wolff Stadium.

“It’s a good win, something to build on,” Hallmark said. “It’s a long season. But, I’m super happy for the players. More excited for them.”

Grateful for the opportunity

Hallmark said UTSA and Stanford made the deal to play at UTSA’s home field last October. Stanford, based in Palo Alto, Calif., had a three-game series scheduled for Feb. 25 through Feb. 27 in Round Rock.

“I knew one of their assistants, and he wanted to play before they flew out (to California),” Hallmark said, “and I said, ‘Heck yeah.’ We’d be more than happy to play. You tell me the time, and we’ll play.’

“So I’m grateful (to) them for wanting to play,” the coach added. “You know, this time of year, we need to play. People need to pitch, and we got about 13 hitters that I think deserve to play. It’s a challenging job, because they all deserve to play.

“Things are going great. Super happy for them.”

Shane Sirdashney rips an RBI single through the left side in the B2 to score UTSA's first run. https://t.co/hyCDEtJ4sq pic.twitter.com/SRC5HGiGvf

UTSA's Garrett Poston leads off the B4 with a triple. A few moments later he scores on RBI
single by Shane Sirdashney. Roadrunners lead the No. 2 Stanford Cardinal, 3-2. https://t.co/hyCDEtJ4sq pic.twitter.com/gOYG0BofX9

Chase Keng slaps a 2RBI double to left field in the B4, giving UTSA a 5-2 lead. Crowd gets into it when Jonathan Tapia scores on a head-first slide. https://t.co/hyCDEtJ4sq pic.twitter.com/UPwOSdTx04

Stanford escapes a no-outs, based-loaded jam in the B5, turning a 6-4-3 double play to end the UTSA threat. https://t.co/hyCDEtJ4sq pic.twitter.com/P1Xsrju1Yc

Correction: Stanford’s double play to end the bottom of the fifth went 4-6-3 in the scorebook.

BARRY! Leyton delivers the walk-off single to deep left-centerfield, scoring Sirdashney as the Roadrunners post their fifth straight win, a 6-5 win over No. 2 Stanford. #BirdsUp 🤙 pic.twitter.com/B76uTDtwo9