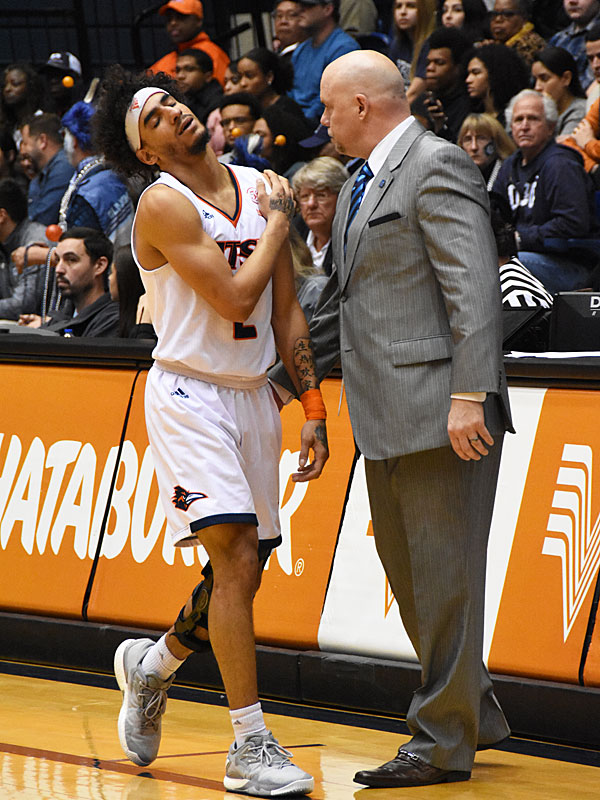 Jhivvan Jackson, coming off the floor in pain in the second half, scored a team-high 21 points for UTSA on Thursday in a 65-64 loss to Old Dominion at the UTSA Convocation Center. – Photo by Joe Alexander

Old Dominion missed a free throw and left UTSA with an opportunity to tie the game in the final seconds Thursday night at the Convocation Center.

But the Roadrunners didn’t get the three-point shot they wanted, settling for a too-late-to-matter layup by Jhivvan Jackson with a second remaining.

After that, the Monarchs inbounded the ball, and the buzzer sounded on their 65-64 victory, which yielded both redemption and a Conference USA regular-season title.

A month ago, UTSA erased an 18-point deficit and stunned ODU, 74-73, one of the biggest collapses in NCAA history with less than five minutes remaining.

In the rematch, not only did the Monarchs make amends for their previous trip to San Antonio, they also won their first regular-season crown since 2010 when they were in the Colonial Athletic Association.

“This one feels good,” Old Dominion guard B.J. Stith said. “But we’ve still got a lot of work to do.”

The Monarchs (23-6, 13-3) can rest a little more easily now, though, knowing that they have the No. 1 seed in the C-USA tournament locked up.

As for UTSA, much remains unsettled.

The Roadrunners (15-13, 9-6) will need to regroup quickly to clinch a top-four finish in standings and a first-round tournament bye. 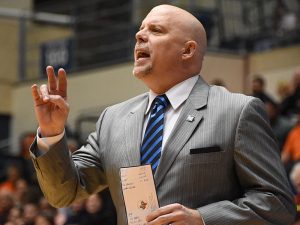 In postgame interviews, Jackson said he slipped when he took a handoff from Keaton Wallace on the last possession.

“By the time I looked down, I was already past the three-point line,” he said. “I tried to get a foul at the layup but they weren’t calling it.”

Jackson, the leading scorer in the C-USA, suffered a left shoulder injury and had to come out with 12:38 remaining. After having it worked on by the training staff, he re-entered the game with 10 minutes left and sparked hope with a dramatic drive for a layup. But his night turned sour a few minutes later when he picked up his fourth foul and had to leave the floor again. He didn’t score again until he hit the last layup.

Asked if coming out to have his shoulder checked broke his rhythm, Jackson said, “Yeah, in the moment, the game was really going good. We was getting stops. But, it’s all good, you know. I got back in the game and tried to do everything I could to help the team.”

Old Dominion outrebounded UTSA, 43-29, including 15-4 on the offensive glass.

With these two teams, what else would you expect?

As soon as UTSA junior Giovanni De Nicolao released his shot from beyond halfcourt, it looked good. It was good. He swished it to stun the Monarchs, giving the Roadrunners a 34-32 lead at intermission.

UTSA freshman Adokiye Iyaye hustles for a putback on the offensive boards. Roadrunners leading, 29-28, 1:43 left in the first half. https://t.co/hyCDEtJ4sq pic.twitter.com/abE2cYLrmZ

Trailing early in the game, the Roadrunners rallied with defense and hustle plays. Here, freshman guard Adokiye Iyaye flies to the rim past a few Monarchs players who should have been blocking out.

Redshirt freshman center Adrian Rodriguez played well off the bench defensively after senior Nick Allen had to come out with his second foul. With Rodriguez in the game, UTSA stopped Old Dominion on several possessions in a row.

UTSA started slowly on offense, but guard Jackson picked it up with a difficult jump shot.