UTSA guard Jhivvan Jackson spent most of Friday afternoon’s workout either going through skill drills and shooting, or toiling with strengthening exercises to rehabilitate a sore left shoulder. 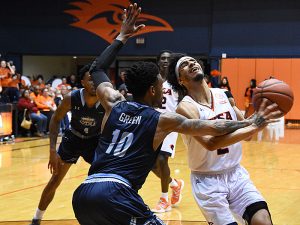 Jhivvan Jackson drives to the bucket against Old Dominion. – Photo by Joe Alexander

When the Roadrunners competed in sets involving scrimmaging and contact, Jackson did not participate.

It’s not a particularly good sign for the Roadrunners, who nevertheless are keeping a good thought that the right-handed Jackson can play against the UAB Blazers Sunday at 2 p.m. at the Convocation Center.

Asked about the status of Conference USA’s leading scorer for the UAB game, UTSA coach Steve Henson said he didn’t know for sure.

“You know, when we left last night, we felt pretty good about it. He woke up pretty sore today. Then we were concerned about it. But he did get some good treatment with (trainer) Josh (Modica),” the coach said.

Jackson hurt the shoulder mid-way through the second half of a Thursday night loss to Old Dominion.

After coming out of the game for a few minutes to stretch it out, he re-entered and played most of the last 10 minutes.

On Friday afternoon, Modica worked with Jackson off to the side for much of the 90-minute drill.

“Josh does a terrific job,” Henson said. “Twenty four hours from now, (Jhivvan)’ll feel a lot better and then Sunday at 2, he’ll feel close to normal. I liked the way he walked out of here today, so that was good.”

Because the UAB game is the last one on UTSA’s home schedule this spring, the Roadrunners will honor seniors Allen and Toby Van Ry and both juniors Giovanni De Nicolao and Mitar Stanocevic, who are both graduating.

Even though Old Dominion has clinched the regular-season title, UTSA needs a victory to bolster its chances of gaining a first-round bye in the C-USA tournament.

The Blazers won by a score of 83-73 with a balanced attack that featured 53 percent shooting from the field and six players in double figures.

After playing the Blazers, the Roadrunners will take on Western Kentucky and Southern Miss on the road to complete the regular season.