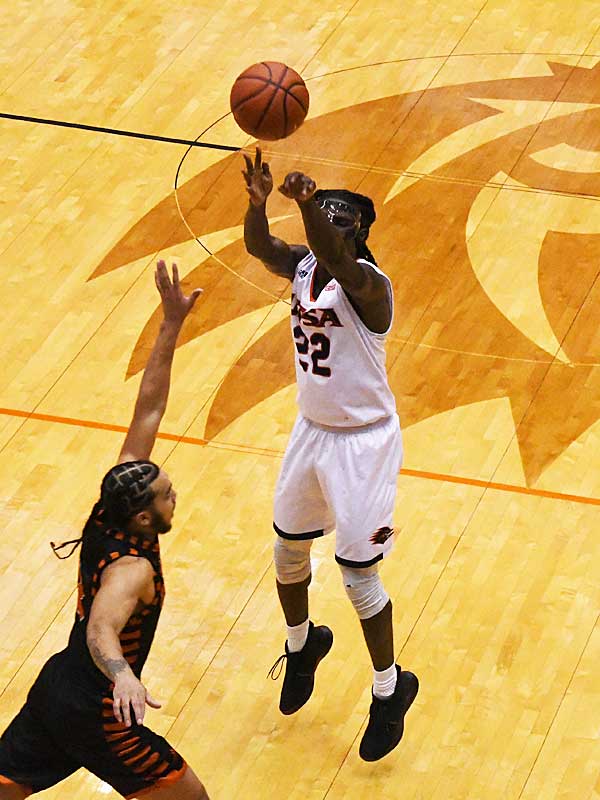 Ten years and one month have passed since the UTSA Roadrunners last won a men’s basketball game against a team from one of the NCAA’s power conferences.

Since then, UTSA has lost 20 straight against teams from the traditional football/basketball powers — namely, the Southeastern Conference, the ACC, the Big Ten, the Big 12 and the Pac-12.

Counting those five conferences, plus the basketball-dominant Big East, the streak is 21 games.

The Roadrunners will try to break those streaks this afternoon in Houston at the Toyota Center against the Pac-12’s Oregon State Beavers.

“That would be big time to beat a team like Oregon State,” UTSA guard Keaton Wallace said. “They’re a good team. I don’t think we’re going to go in and change anything or go in timid.

Led by forward Tres Tinkle, the unranked Beavers (8-1) have won six straight games. The Roadrunners (4-6) are playing well, having won four of five since an 0-5 start.

Included in the losses, UTSA fell 85-67 in the season opener at Oklahoma, a power opponent from the Big 12.

Since then, the Roadrunners changed up the backcourt, bringing in Erik Czumbel to start at the point.  They also changed some things on how to free shooters on the perimeter.

The result has been better play from Wallace and an offense that has scored 264 points over its last three games.

UTSA coach Steve Henson said high expectations were not met earlier in the season, but he added that players are getting more comfortable with the system.

“We’re a pretty talented group,” UTSA coach Steve Henson said. “We did not get off to the start we envisioned … We’re still not where we hope to be.  Lately, we’re playing a lot better.