Guard Keiunna Walker buries a jumper down the stretch for the Louisiana Tech Lady Techsters. Walker finished with 20 points in a 62-57 victory over UTSA. https://t.co/hyCDEtJChY pic.twitter.com/CmJGD6cHfb

Louisiana Tech guard Keiunna Walker fell hard underneath the UTSA basket early in the fourth quarter and wobbled off the floor to take a breather.

A few minutes of rest was all she needed. 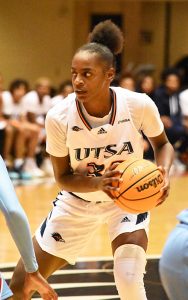 Jordyn Jenkins scored 21 points for her fourth straight game of 20 or more. – Photo by Joe Alexander

Walker returned late in the game to knock down two shots, helping LA Tech rally for a 62-57 victory over the Roadrunners.

Lady Techsters coach Brooke Stoehr, with her team down three points at the end of three quarters, applauded her team’s defensive effort down the stretch.

“I thought the defensive effort in the fourth quarter was tremendous, to hold them to 10 (points),” Stoehr said. “We had two quarters, the first quarter and fourth quarter, I thought we were pretty solid defensively.

“(We’d) given up a bunch of offensive rebounds in the second and third quarters, and we just talked to them a lot about, ‘Hey, they’re a great rebounding team,’ and (UTSA coach) Karen (Aston) has ’em playing so hard.

“They put a lot of pressure on you with (Jordyn) Jenkins and (Elyssa) Coleman in there, in the paint. I think (UTSA guard Hailey) Atwood had three or four (offensive boards) at halftime on the offensive end.

“So, just really proud of our group, and how they continue to fight. It’s tough to win on the road.”

With the victory, Louisiana Tech (8-4 overall) overcame the absence of injured forward Anna Larr Roberson and evened its record in Conference USA to 1-1. 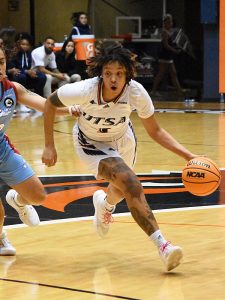 Hailey Atwood finished with six points and seven rebounds off the bench for the Roadrunners. – Photo by Joe Alexander

UTSA (2-8, 0-1) skidded to its third straight loss, coming up short on its home court against one of the conference’s better teams.

For Roadrunners coach Karen Aston, the loss was a tough one because she wanted to win her C-USA opener for everyone in her home arena who attended on a holiday week night.

She also wanted a win for her players, who have put in the hard work at practices this season, only to lose by seven or fewer points in seven of the eight losses.

“Even though (fans) wanted to win tonight, I think they would appreciate the effort and how close we are right now. I know the focus is on us not finishing games. But we weren’t even in the games last year. We’ve made remarkable progress.”

With UTSA holding a 47-44 lead entering the fourth quarter, Louisiana Tech forward Lotte Sant immediately stepped out and nailed a three to forge a tie.

From there, both teams went cold, scoreless for almost four minutes. In that stretch, Walker had to leave the game when she was hit from behind and fell hard under the UTSA basket.

Walker walked off the floor after both the LA Tech team trainer and coach came out to check on her. It was potentially a big loss for the Lady Techsters, because she had 16 points at the time. 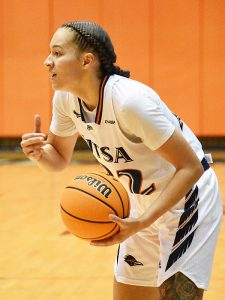 UTSA guard Kyra White was held scoreless on zero for six shooting, but she contributed in a big way with seven rebounds, six assists and two steals. – Photo by Joe Alexander

Fortunately for LA Tech, she returned three minutes later just as UTSA was beginning to pick up some momentum.

Coleman went to work inside, got fouled and sank two free throws with 2:32 remaining, pulling the Roadrunners to within one.

On the next trip upcourt for LA Tech, Walker knocked down an 18-foot jumper. After Jenkins answered for UTSA with a bucket to make it a one-point game again, Walker struck one more time.

Getting the ball on the left side, she circled to the right on the dribble and then cut to the basket, sinking a driving layup while also drawing a foul.

Walker lay motionless after she hit the floor and had to come out again, the victim of apparent cramping.

Teammate Mackenzie Wurm, stepping to the line in Walker’s place, knocked down the free throw for a 59-55 lead with 1:30 remaining.

UTSA could get no closer than two points the rest of the way.

“Just reallty proud of our players,” Stoehr said. “We’ve had a lot of people step up. We’re a little short-handed right now. Just, facing a lot of adversity. So it’s good to see our bench come in and do what they did.”

UAB at UTSA, Saturday, at noon 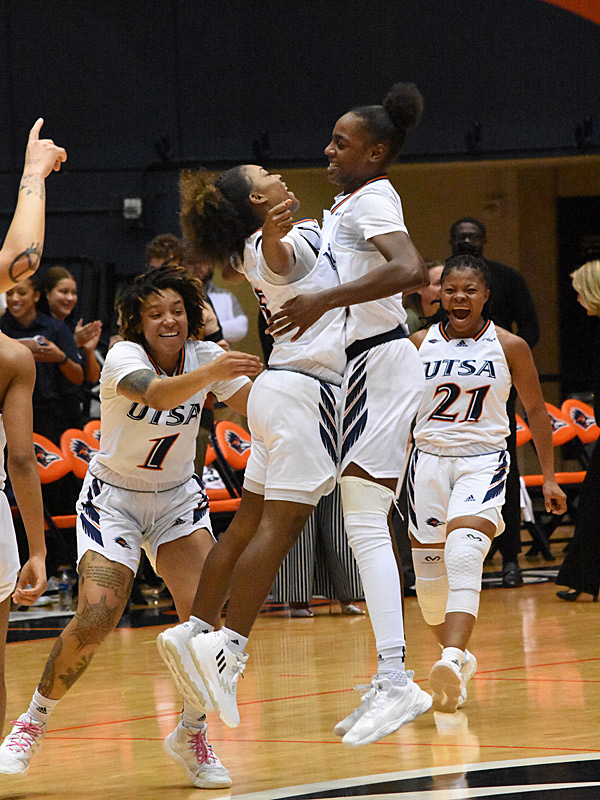 Madison Cockrell and Jordyn Jenkins celebrate after Cockrell hits a long shot to end the first half. – Photo by Joe Alexander

Freshman Madison Cockrell banked in a 40-footer at the halftime buzzer to give the UTSA Roadrunners an emotional lift and a 33-28 lead at intermission.

Cockrell’s heave from just inside the halfcourt stripe, launched on the dribble, underscored UTSA’s shot-making ability — and perhaps its good fortune — in the half.

The Roadrunners connected on 15 of 31 from the field and three of six from 3-point distance over the first and second quarters.

Louisiana Tech forward Anna Larr Roberson, a career 1,000-point scorer for the Lady Techsters, did not play. She was on the bench with what appeared to be a cast on her right hand. A LA Tech spokesman described it as a finger injury.

UTSA freshman Alexis Parker did not play. She had a walking boot on her right foot and wasn’t suited up. Parker, from Brandeis High School in San Antonio, scored 11 points in UTSA’s last game, a 93-89 overtime loss at Houston on Dec. 21.

Jenkins on the run

UTSA's Elyssa Coleman takes it to the basket for a field goal in the first quarter. Louisiana Tech
leads 13-10 after one period. https://t.co/hyCDEtJChY pic.twitter.com/BTQPgnVyKo

In the spin cycle

Louisiana Tech guard Keiunna Walker executes a spin move and then hits a jumper in the third quarter at UTSA. https://t.co/hyCDEtJChY pic.twitter.com/9EehlOLR65