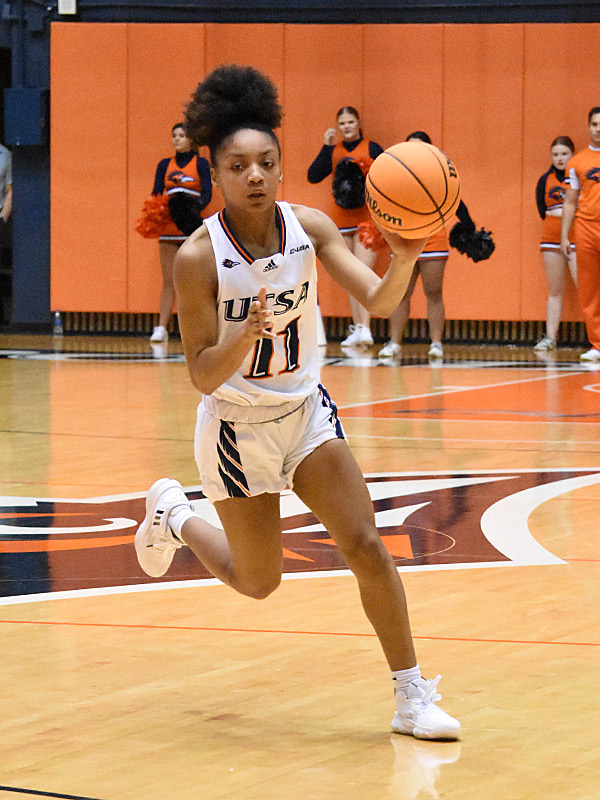 Sidney Love and the UTSA Roadrunners host the UAB Blazers today at the Convocation Center. Love is a freshman from Steele High School. – Photo by Joe Alexander

The Roadrunners, improved but still a work in progress in their second season under Coach Karen Aston, host the UAB Blazers in a New Year’s Eve contest at noon in the Convocation Center.

UTSA (2-8, 0-1 in Conference USA) is coming off its first home loss of the season Thursday night.

To recap, the Roadrunners hit a halfcourt shot at the buzzer and led by five points at the half. They led by three at the end of three quarters. But they couldn’t hold on, falling 62-57 to all C-USA guard Keiunna Walker and the Louisiana Tech Lady Techsters.

The Blazers (8-3, 0-2 in Conference USA) likely don’t have a player with Walker’s credentials. But they do feature two capable backcourt players in senior Margaret Whitley and freshman Denim DeShields.

Whitley and DeShields are the sparks for a team that leads Conference USA in scoring. The Blazers and Rice Owls both average 77.4 points per game.

Whitley, DeShields and forward Lyndsey Robson all play big minutes, with the three averaging 25 minutes or more. They’re 1-2-3 in scoring, respectively, for the Blazers and 10th-year coach Randy Norton.

To beat UAB, UTSA will need to guard the three-point line. The Blazers lead the conference in shooting from beyond the arc at 37.8 percent, with Whitley hitting at an eye-opening 48.3 clip.

Lately, the Blazers have been frustrated in losing their first two conference games — both on the road — to the Charlotte 49ers and the UTEP Miners. The Blazers were stymied in a 76-58 loss at UTEP Thursday night on the first game of a road trip through Texas.