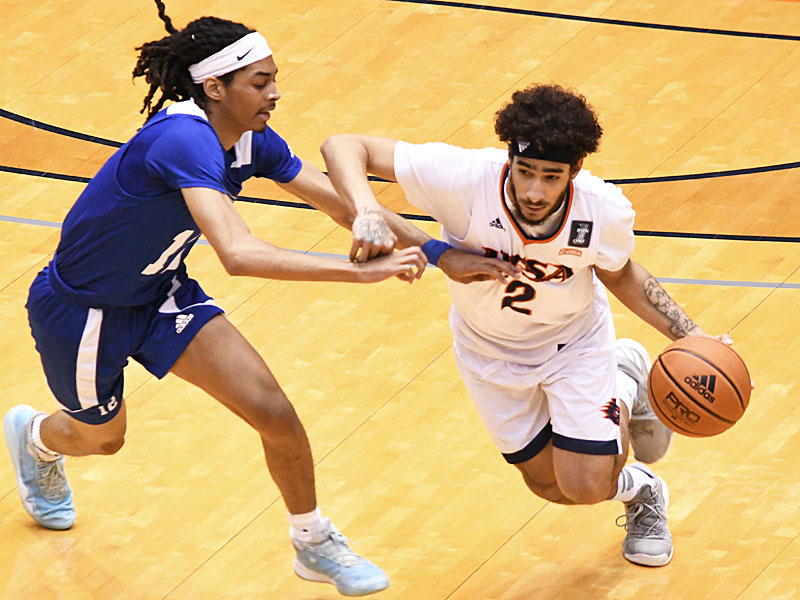 Jhivvan Jackson scored 23 points in the first half for UTSA. He had 27 for the game, one off his season-high. – photo by Joe Alexander

The UTSA Roadrunners went off on a 19-1 scoring spree during a six-minute stretch in the first half Sunday and then cruised past the NAIA Our Lady of the Lake University Saints, 102-70, at the Convocation Center.

Bouncing back from a poor shooting effort at Oregon State last week, UTSA guard Jhivvan Jackson scored 27 points on 10 of 15 shooting from the field.

Center Jacob Germany produced 17 points, 12 rebounds and two blocked shots for the Roadrunners, who improved to 3-0 at home this season and 3-3 overall. 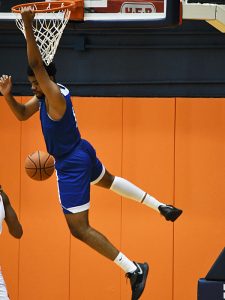 Jordan Embry led San Antonio-based Our Lady of the Lake with 14 points and 10 rebounds. — Photo by Joe Alexander

“It felt good, because we thought we was going to win that one at Oregon State,” Jackson said. “I think we played the right way. Just, the shots didn’t go in … We started off a little slow (today) but we picked it up. It felt good. Having a win always feels good.”

Returning to a home court setting that has been kind to him over the past three-plus seasons, he scored 23 in the first half on 9 of 12 accuracy from the field.

“I feel comfortable in every building, you know,” Jackson said. “I work hard enough to feel comfortable. I was not focused too much on my shot (today). You know, I wanted to get more in the paint. I think that worked out for me.”

Our Lady of the Lake was playing its second game in two days in two different cities.

After losing on the road Saturday afternoon at Texas A&M-Corpus Christi, 99-72, the Saints showed up at UTSA less than 24 hours later determined to knock off an NCAA program starting its 40th season of basketball.

UTSA had other ideas, dominating in all phases of the game in the first half en route to a 54-30 lead.

The Roadrunners finished with a season-high in points, topping the 97 they scored in the season opener against Texas-Permian Basin.

They also finished with a dominating performance on the boards. UTSA out-rebounded a smaller OLLU team, 65-38, including a massive 31-13 advantage on the offensive glass.

Later, on a Zoom conference with reporters, UTSA players admitted they may have let a major victory slip through their fingers in the 73-61 loss at Oregon State.

“I think they definitely got away with that one,” Germany said. “I think we could have done a lot better in the second half. To go on more runs. To pick it up defensively. It happens. Basketball is a game of runs. They just out-ran us.”

They led 13-0 early in the game at OSU and 34-30 at halftime. The Roadrunners were up 51-46 with 7:22 remaining and then collapsed with poor shooting and defensive lapses down the stretch.

On Dec. 12, OLLU recorded an upset victory against Division I Texas State, winning on the road in San Marcos, 61-58. UTSA coach Steve Henson made sure his team was aware of it. He also said it was important to get off to a good start after what happened in Oregon.

Said Henson: “We have a lot of respect for Texas State, and they beat Texas State. So our guys knew we had to come out and play the right way. We’re just trying to keep building. We felt like we did some good things leading up to Oregon State. We opened that game the right way. We did pretty well in the first half. We were going to come back and see if we could do it again today.” 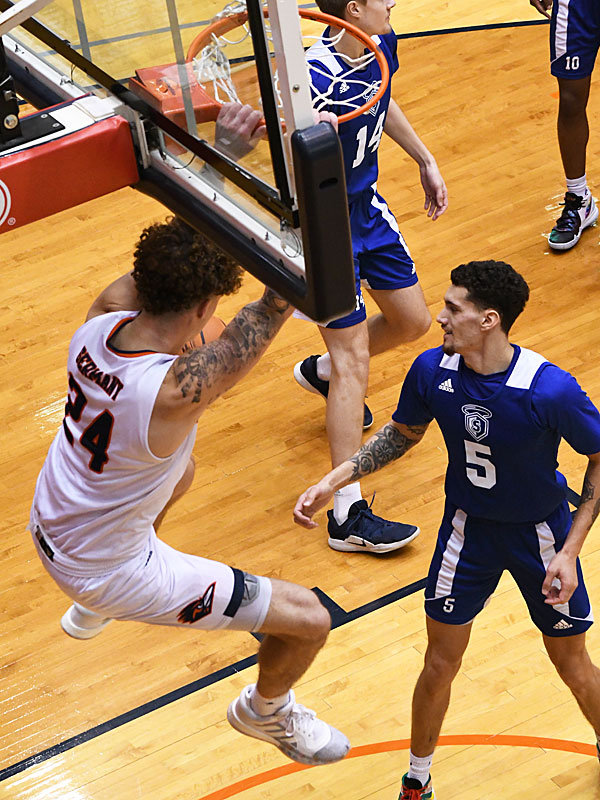 UTSA center Jacob Germany produced 17 points and 12 rebounds against Our Lady of the Lake. Germany helped the Roadrunners out-rebound the visitors, 65-38.- photo by Joe Alexander