After some shaky moments in the opening few minutes of the season, the UTSA Roadrunners kicked their transition game into high gear.

They went on to shoot 55 percent from the floor in the first half to forge a commanding 19-point lead, en route to an easy 97-66 victory over the Division III Trinity University Tigers. 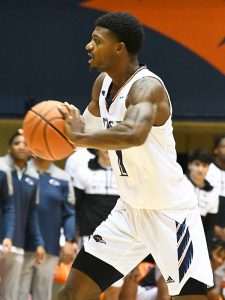 A crowd of 1,302 gathered at the Convocation Center, curious to see what the Roadrunners could do without departed four-year scoring stars Jhivvan Jackson and Keaton Wallace.

What they witnessed was pleasing, to say the least.

“There were some real positive things out there,” UTSA coach Steve Henson said. “We’ve got a lot of work to do. Long way to go. But some of the things that jumped out at us were the limited amount of turnovers — eight, and I’m guessing five or six were charges.

“I liked the way we took care of the basketball. (We had) a huge number of assists (24). I thought our guys were unselfish. They were trying to make plays for each other.

“The fact that the (Tigers) played 40 minutes of zone, and we hadn’t put a lot of our zone stuff in (was significant). Back earlier in the year we did some research, and last year, less than nine percent of our possessions were zone offense possessions.

“You’re going to work on what you do a lot. We’re going to play man to man offense most of this year, so we didn’t have a big package of things in. We had two alignments and basically two plays, and they played two different kinds of defenses. 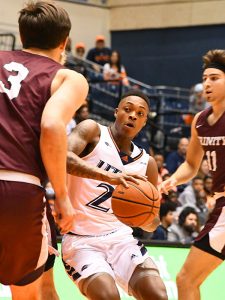 “Makes it a little bit hard to get a rhythm … But to see that (zone) for 40 minutes, I thought our guys handled it pretty well.”

Center Jacob Germany did most of the damage. He scored 24 points in 19 minutes, and he did it by hitting on 10 of 15 shots from the field.

The Roadrunners will play on the road Friday when they meet the Oklahoma Sooners, a Division I power conference program.

Trinity — Ben Hanley and Tanner Brown led the Tigers with nine points apiece. Brown is a 6-3 sophomore from Brandeis.

The 6-foot-11 post from Oklahoma had a tough week last week when he sprained his right ankle at practice and was limited in workouts for a few days.

He was running well against the Tigers but acknowledged that he may have lost some conditioning with the missed practice time.

“I definitely felt, in the first 45 seconds of the game, I was gassed,” Germany said. “But in the first game, I think everyone’s kind of gassed. You know, they’re excited. And their adrenaline is going … but, no, I was out for like a day, a little sprained ankle.

“We have a great under-water treadmill. Treadmills like that, you can run on with no weight, so that definitely helped me through that.”

UTSA started the season with a lineup consisting of Germany at center, Cedric Alley Jr. at power forward, Deing at the small forward, Ivy-Curry at shooting guard and McNeill at the point.

It was the first game in a UTSA uniform for both Deing and McNeill, and both had some big moments to get the team started.

In his first half as a member of the Roadrunners, Deing introduced himself to the fans by hitting 4 of 6 from the field and 3 of 5 from three. He also had three assists and three rebounds.

Deing, who played at two colleges previously, said it felt great to get the victory. “It just feels good doing it with my new family,” he said. “It’s a great atmosphere. I love San Antonio so far.”

Asked about his own performance, he said, “Normal. It’s just a normal deal, playing relaxed, and playing my game. Just doing what I do to get the dub (the win).”

Getting the crowd going

Lachlan Bofinger came off the bench to get the crowd going early. He had two dunks, including one on a one-handed feed from McNeill that brought fans out of their seats. Bofinger finished the game with six points, four rebounds and a steal in nine minutes.

With strong personal ties to the UTSA coaching staff, Sacramento Kings guard Buddy Hield attended the game and also talked to the players.

“Don’t know if you’ve had an opportunity, but if you haven’t, you need to spend some time with Buddy,” Henson said. “He’s one of the most unique, special people I’ve ever been around.”

Hield led the University of Oklahoma to the 2016 NCAA Final Four.

OU’s head coach at the time was Lon Kruger. Two of Kruger’s staffers were Henson, then an OU assistant coach and Scott Thompson. Thompson is one of Henson’s assistants with the Roadrunners. 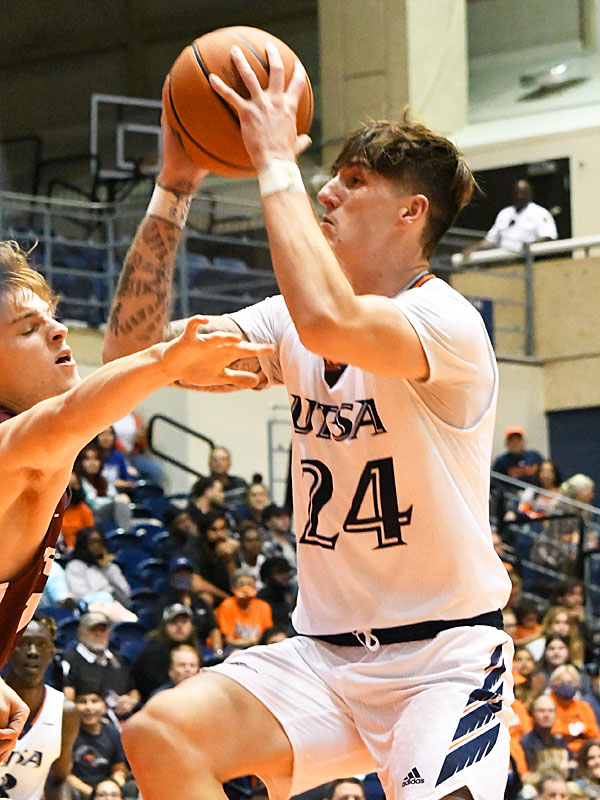 Jacob Germany connected on 10 of 15 shots from the field and scored 24 points against the Trinity Tigers. – Photo by Joe Alexander