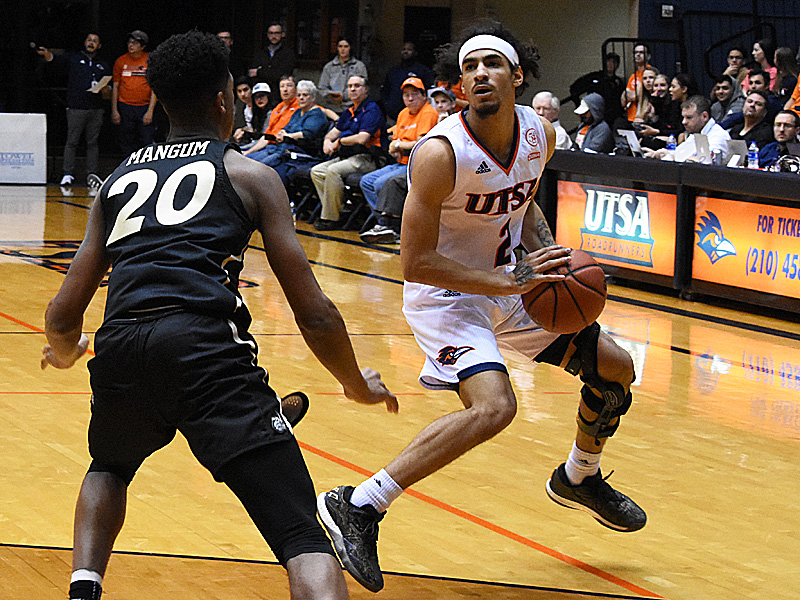 Sophomore guard Jhivvan Jackson steps back behind the three-point line to hoist a shot. Jackson hit six threes against the Charlotte 49ers. — Photo by Joe Alexander

The UTSA Roadrunners didn’t like the feeling of losing two in a row in Conference USA.

In response, they took out their frustrations on the Charlotte 49ers, rolling to an 88-43 victory Thursday night at the UTSA Convocation Center.

Coming on the heels of road losses at Middle Tennessee and UAB, it was UTSA’s largest winning margin against an NCAA Division I program in three seasons under Coach Steve Henson.

It was also the program’s widest margin of victory in a C-USA game since joining the conference for the 2013-14 season.

Sophomore Jhivvan Jackson led the way with 28 points on an efficient 11 of 19 shooting from the field. He hit six three-pointers.

UTSA led by 25 at intermission and boosted it into the 30s four minutes into the second half.

The lead expanded into the 40s with two minutes left and grew to 45 on the last bucket of the night, a layup by reserve forward Adrian Rodriguez, with 19 seconds remaining.

Previously, UTSA’s largest margin of victory in a C-USA game (21) came three years ago against Southern Miss. The Roadrunners beat the the Golden Eagles 74-53 on Feb. 20, 2016 at the Convocation Center.

“We were really locked in defensively. Then Jhivvan got hot. We did some good things offensively anyway, and then he got real, real hot, and we popped the game open in the first half.” — UTSA coach Steve Henson.

With the win, the Monarchs improved to 16-5 and 6-2 in the C-USA. They lead the conference standings over Marshall, North Texas, UTSA and UAB, all at 5-2.

Jackson hits one of his five first-half three pointers. He swished this one after a defender put a hand in his face. Jackson created some space between him and the defender with a slight lean to his right.

Jackson scored 21 points in 18 minutes in the first half for the Roadrunners, who rolled to a 44-19 lead on Charlotte at intermission.

Jackson was 8 of 13 from the field and was particularly deadly from long distance, hitting five of nine.

He hoisted his last trey from a spot directly in front of the Charlotte bench (see video above).

Sophomore Keaton Wallace breaks free for a floater in the lane as UTSA scores off an out-of-bounds play in the second half.

Charlotte was in the game for the first five minutes. The 49ers took an 8-6 lead when guard Jon Davis sank a driving layup.

After that, UTSA responded with a 16-0 run, capped by three consecutive threes from Jackson.

Jackson effectively bounced back from two erratic shooting nights on the road. He hit a combined 18 of 49 from the field last week against Middle Tennessee and UAB … The Roadrunners have won eight of their last 10 games overall … They connected on 55.7 percent from the field for a season best against a Division I opponent … In addition, they also established a season high by limiting the 49ers to 29.6 percent … Jon Davis, Charlotte’s scoring leader, was held nine points under his average. He finished with 12.

Jackson scores his final basket with 6:46 remaining as he picks up a loose ball in the lane and lays it in. The ball popped out when two Charlotte players fumbled the rebound, emblematic of a tough night for the 49ers.