UTSA freshman Adokiye Iyaye catches a bullet pass in the corner and then drives baseline against Charlotte. Iyaye scores 12 off the bench against the 49ers. https://t.co/hyCDEtJ4sq pic.twitter.com/KEuWM9ej88

On a first-half breakout Thursday night against Charlotte, UTSA reserve guard Adokiye Iyaye sped down one sideline and stationed himself in the corner.

He looked up to see a bullet pass coming his way. 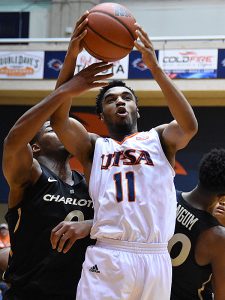 UTSA freshman Adokiye Iyaye is averaging 5.7 points per game on 47.1 percent shooting for the season. –Photo by Joe Alexander.

After making the catch, he knew exactly where he wanted to go with the ball.

Straight to the basket.

Iyaye flashed down the baseline and scored on an easy layup before the 49ers’ defense had time to rotate.

Even though Jhivvan Jackson and Keaton Wallace have led the Roadrunners offensively all year, plays like this have started to happen much more frequently lately for the Roadrunners, who will host the Conference USA-leading Old Dominion Monarchs Saturday afternoon at the Convocation Center.

Iyaye has hit 14 of 19 shots from the field over his last five games, helping UTSA surge into a tie for second place in the conference race.

In an 88-43 rout of Charlotte, the program’s most lopsided victory in conference play in 28 years, Iyaye hit 5 of 6 shots from the field and tied a career high with 12 points.

Teammates say that Iyaye has always had the ability but is just now developing more confidence as he moves along in his first year of college basketball.

“We just expect good things out of Adokiye.”

Jackson said Iyaye has “stepped up big” in the team’s pursuit of a conference title.

“We want him to do that,” Jackson said. “He can do that every night, if he just plays the way he did (against the 49ers). He’s getting more confident. We just tell him to keep going. We tell him to take more shots if he’s open.

“He’s (also) helped us on the defensive end, putting pressure on the ball. Just making plays.”

Last year, Iyaye was the man for his high school in Tulsa, Oklahoma. He averaged 18 points per game and led Putnam to the Class 6A title.

This year, it’s been a new experience for him, both in coming off the bench and in facing bigger and faster players.

Now he’s picking up the nuances of the college game at a rapid pace, as evidenced by his recent statistics — 7 points per game and 73.6 percent shooting in his last five.

Not bad for a kid from Tulsa who just turned 19.

“I’m finding my groove a little bit,” Iyaye said. “My teammates, they’re always on me, telling me that I’m going to be fine.”

“I wasn’t making shots early, but they keep telling me to shoot and give me a lot of encouragement. They’re like my big brothers.

“Hearing that every day, it makes me feel like, if I have a bad game, I’ll do better next time.”