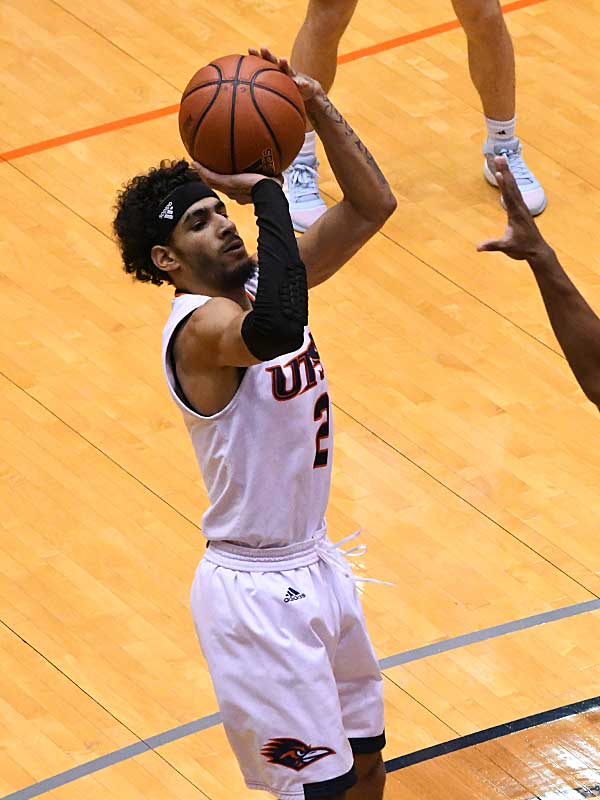 UTSA guard Jhivvan Jackson, the third-leading scorer in NCAA Division I, has produced 30 or more points in three of his last four games.- Photo by Joe Alexander.

The UT Permian Basin Falcons will carry a 10-game winning streak into Sunday’s 3 p.m. game at the Convocation Center against the UTSA Roadrunners.

Forward Miles Washington, a 6-foot-8 transfer Mississippi State, hit 9 of 9 shots from the field and scored 19 points to lead the Falcons past the Aggies in an LSC game.

Back from the break

In meeting the Falcons, the Roadrunners are returning to the court for their first game action in eight days.

They’ve won three of their last four, including back-to-back victories over Texas A&M-Corpus Christi and Texas State. In their last outing, the Roadrunners won in San Marcos against the Bobcats, 77-71, on Dec. 7.

Junior guard Jhivvan Jackson ranks third in the nation in scoring at 24.9 points per game. He has scored 30 or more points in three of his last four, including a season-high of 33 against Texas State. Jackson’s career average of 21.2 ppg is No. 1 in school history.

Junior guard Keaton Wallace has started to click offensively, averaging 24 ppg in his last two games. Combined, in victories over the Islanders and Bobcats, Wallace has hit 14 of 24 from the field, 1 of 4 from three and 19 of 19 from the free-throw line.

The Roadrunners have won three of four since freshman Erik Czumbel has been the starter at point guard. Czumbel, from Verona, Italy, is averaging 5.8 points on 52.9 percent shooting from the field and 50 percent from three. Czumbel hit three, 3-pointers at Texas State.

It’s a busy week for the Roadrunners.

After tangling with the Falcons, the Roadrunners will play the Pac-12’s Oregon State Beavers on Wednesday in Houston. The game is set for 4:30 p.m. at the Toyota Center, the home of the Houston Rockets. On Saturday, they’ll return home to the Convo to face Illinois State. The Illinois State game is a 3 p.m. start.