UTSA's Japhet Medor drives on the Prairie View defense and banks in his last field goal of the night to finish with 28 points. https://t.co/hyCDEtJ4sq pic.twitter.com/aITfnUEW6B

As pages on the calendar flip to November, as the weather turns cooler and as the Thanksgiving holiday comes around, native Floridian Japhet Medor always thinks about the taste of his mother’s macaroni and cheese.

For John Buggs III, his thoughts sometimes take him home to Louisiana and a heaping plate of Cajun turkey.

This year, Medor and Buggs will spend their first turkey day in San Antonio with their new family — with their coaches and teammates in the UTSA basketball program. It promises to be a good day, with a morning practice, followed by lunch at the home of head coach Steve Henson. 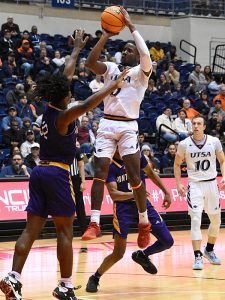 Shooting guard John Buggs III rises up to let one fly over a defender on the way to 18 points against the Prairie View A&M Panthers. – Photo by Joe Alexander

The impending holiday was made all the more special Tuesday night when the surprising Roadrunners won their third straight game and their second straight against a solid, mid-major program in NCAA Division I.

Medor, playing in only his fifth game as a Division I player, followed a 16-point effort against the Bobcats with 28 against the Panthers of the Southwestern Athletic Conference.

Employing quick bursts into the paint and to the rim, he drew 14 fouls and hit 16 of 20 from the free throw line. On top of that, he added seven assists, for good measure.

Not to be outdone, Buggs scored 18 and matched teammate Isaiah Addo-Ankrah with four 3-pointers. As a team, the Roadrunners knocked down 11 from long distance, including two from D.J. Richards and one from Josh Farmer, to keep the Panthers on their heels.

Outside of nine second-half turnovers, the UTSA offense was about as good as coaches could have asked for.

The Roadrunners shot 60 percent from the field in the second half and 52 percent for the game. Additionally, in notching 13 assists on 24 baskets, UTSA underscored once again its emphasis on sharing the ball. 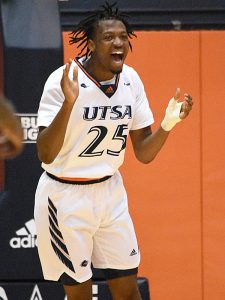 Isaiah Addo-Ankrah snapped out of a shooting slump by making four of seven from 3-point distance.
He had 13 points, two rebounds and two assists. – Photo by Joe Alexander

Asked about the meaning of a victory over a group of veteran players like the Panthers, who defeated the Pac-12’s Washington State Cougars last week, Medor didn’t hesitate with a reply. “It means that the sky’s the limit for us,” he said. “We have room to improve, and we’re making it happen. So I feel like the sky’s the limit for our team, and we’re going to get better every day.”

Seemingly, as Medor and Buggs have gained confidence, the players around them also have taken a few positive mental steps forward, as well.

“That’s what we talk about,” Henson said. “With Japhet, he did (tonight) exactly what our coaches said he did when (they) went to recruit him (last spring in Florida). I saw him practice. Our coaches saw him play in games. They came back and said he just draws fouls, puts pressure on the defense.

“He showed signs of that here and there (early this month). He had some stretches in the exhibition game (against Schreiner University), just serving everybody up. I mean, in the second half against St. Mary’s, when he took over the game … He’s had stretches before, and then obviously he took over tonight.

“Drawing 14 fouls,” the coach said, looking again at the stat sheet, “I don’t know if I’ve seen that very often.”

The Roadrunners host the 210 San Antonio Shootout this weekend. They’ll play Grambling State on Friday night (at 7:30), followed by games against Dartmouth on Sunday (7:30) and Incarnate Word on Monday (4:30).

Some in the program might be a bit surprised at the team’s record leading into Thanksgiving after a trip Texas A&M-Corpus Christi for the second game of the season ended with a 75-55 loss. UTSA took a beating in the second half on that Nov. 11 evening on the Gulf Coast, giving up 50 points. 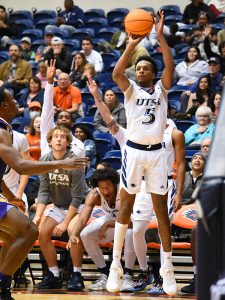 Freshman DJ Richards scored eight points in 18 minutes off the bench. He made two of five 3-point shots, giving him nine of 21 for the season. His 42.3 percent on threes ranks second on the team to John Buggs’ 45.2. – Photo by Joe Alexander

In one stretch covering 17:30, the Islanders pounded the Roadrunners, 47-19. What has changed since then? In a sense, not much. But, then again, maybe the game opened some eyes about what can happen when not everyone on the roster is dialed in and ready to play.

“I think that loss at Corpus kind of lit a fire under us, making us not want to feel that feeling again,” Buggs said. “We’re just doing everything we can to power through games and just push through to get the win.”

Prairie View A&M — Guard Will Douglas had 19 points on six of 12 shooting. Douglas also hit seven of nine at the line. Guard Jeremiah Gambrell produced 18 points, seven of 18 from the field. He hit two of seven from long distance. Tekorian Smith had 10 points, three assists and three rebounds. Kortrijk Miles produced eight points and four steals off the bench.

UTSA — Japhet Medor had 28 points on six of 10 shooting from the floor. He made 16 of 20 at the free-throw line. In a dominant showing, the Roadrunners’ point guard made three fewer free throws than Prairie View made as a team. John Buggs III had a career-high 18 points and hit four of seven from three. Buggs has made 11 of 18 from distance in his last three games. Isaiah Addo-Ankrah also hit four of seven from distance. A long-distance specialist, he started the season three for 23 in his first four games.

After a long possession, Josh Farmer swishes a three out of the corner for UTSA, now leading 63-53, w/7:43 left. https://t.co/hyCDEtJ4sq pic.twitter.com/w0rRAoGNOC

UTSA unleashed Medor offensively in the first half, and the Florida native responded with a Jhivvan Jackson-like tour de force. Known mostly as a pass-first point guard at Hillsborough College in Tampa, he scored 18 points as the Roadrunners surged into a 36-32 lead. 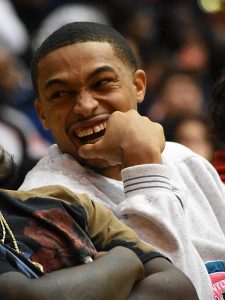 Playing man-to-man defense, the Panthers simply couldn’t stay in front of the 6-footer, who consistently drove past his man. When that happened, he usually would draw contact from someone else, the whistle usually would blow, and then he’d go to the free-throw line.

“I was told to be more aggressive, and my teammates helped me out a lot,” Medor said. “They closed out on Buggs a lot, and they were denying a lot, so it made it a lot easier.”

Another issue faced by the Panthers’ defense revolved around 6-foot-11 center Jacob Germany, the Roadrunners’ leading scorer from last year. The Panthers seemed reluctant to cheat off Germany, which gave Medor more room to operate.

Buggs and Medor have been in San Antonio working out together since June. In that regard, nothing that Medor does on the floor in a game will surprise Buggs.

“I see this every single day in practice,” he said. “One way or the other, if he’s not having 10 assists, hey, tonight, ya’ll saw 28 points. There’s nothing he really can’t do. So, it doesn’t surprise me at all.”

Under Coach Byron Smith, the Panthers forged records of 22-13, 19-13 and 16-5 in three seasons from 2018-19 through the 2020-21. In 2019, they won both the Southwestern Athletic Conference regular and postseason titles and qualified for the NCAA tournament. Last season, they fell off to 8-19. But coming into San Antonio, they had won three of their first four games, including a 70-59 victory last Tuesday at home against Washington State. 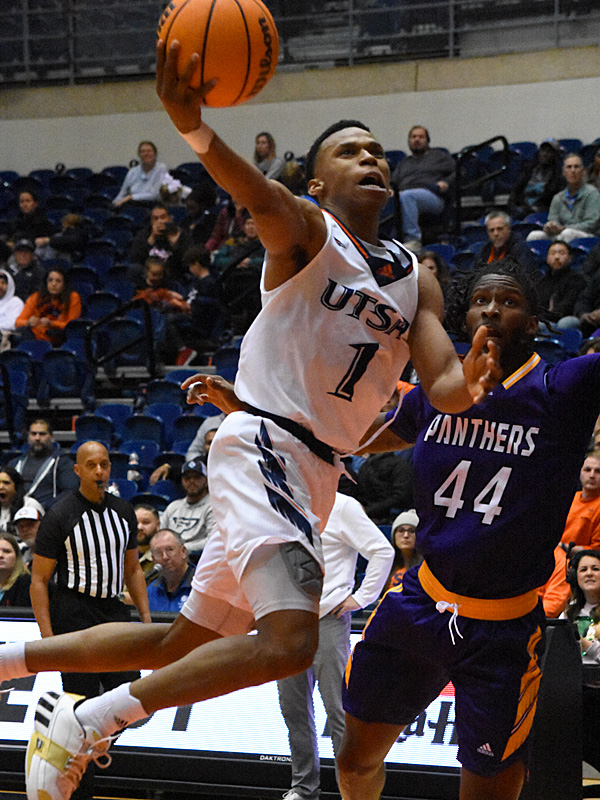 Japhet Medor sank 16 of 20 free throws and scored a career-high 28 points as the UTSA Roadrunners downed the Prairie View A&M Panthers at the Convocation Center. – Photo by Joe Alexander