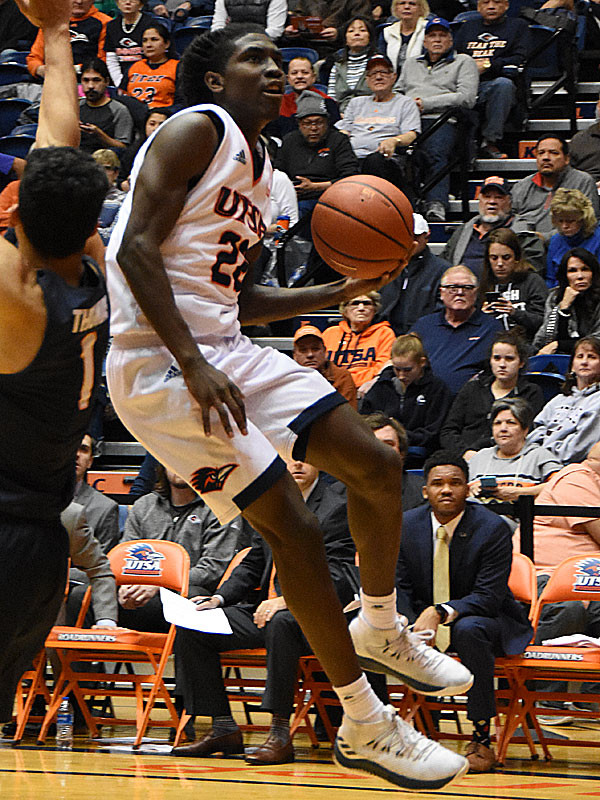 UTSA guard Keaton Wallace showed up with his “A” game on Thursday night, which did not come as a surprise to anyone in the Convocation Center.

The Roadrunners were playing the rival UTEP Miners, and it was the Conference USA opener, so it figured that the standout sophomore from Dallas would arrive ready to make an impact.

But in a little bit of a twist to recent history, all eight regulars in the playing rotation made at least one field goal.

Not counting four players who played the final minute of the game, all eight in the rotation scored and four hit double figures, which was meaningful to Roadrunners coach Steve Henson.

“It’s good,” coach Steve Henson said. “We spent a lot of time working on some things this week, making sure Byron (Frohnen) is touching the ball. You know, he started out great. He gave us a good lift in the second half, as well.” 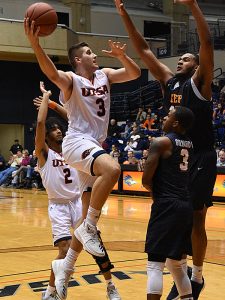 Frohnen went scoreless for the first time this season last Saturday against Southeastern Oklahoma, which likely was the reason for the adjustment in practice. He responded with 10 points and five rebounds against the Miners.

“He’s just such a mismatch guy,” Henson said. “He just gives us such a different look. You know, they tried cross-matching some things, putting their five man on him. We set some real low, tight ball screens.

“It allowed him to get in the paint and shoot little floaters. He generally doesn’t force things. He’ll kick it out. So, to get him involved and have everyone else (hit a field goal), yeah, it’s fantastic.

“You can’t be a two-man show (with Wallace and Jhivvan Jackson). We know that.”

In a scheduling quirk, the two teams will play again Saturday night in El Paso. UTSA has won four straight and seven out of nine leading into the rematch.

In the recent nine-game stretch, the Roadrunners have played at a high level defensively, holding the opposition to 42 percent shooting or lower in each outing. The Miners were limited to 34 percent.

Playing under first-year coach Rodney Terry, the Miners flashed at times with some talented players.

But the Roadrunners’ defense seemed to take them out of what they wanted to do, and on top of that, the visitors also missed several easy baskets.

The Roadrunners have won four straight in the series against the Miners.

Jhivvan Jackson has his shot blocked in the paint, but UTSA regains possession and gets the ball to Keaton Wallace, who buries a three.

Playing lock-down defense from the outset, UTSA bolted to a 13-0 lead and then held on for a 33-24 advantage against UTEP heading into intermission.

The Roadrunners held the Miners to 30.4 percent shooting in the first half on 7 of 23 shooting from the field.

On offense, UTSA started fast, hitting 6 of its first 8 shots. Frohnen had three of them to get the offense rolling.

The Roadrunners got rolling early in the second half with an 8-0 run, highlighted by two three-pointers from Jhivvan Jackson.

Roadrunners forward Adrian Rodriguez maneuvers to sink a baby hook shot for the final points of the half.

“This is our rival game,” he said. “We knew a lot of people were going to come out and watch. So we were locked in and focused.”

Wallace said the team had a different mindset compared to its previous outing, a lackluster 70-67 victory Saturday against Division II Southeastern Oklahoma.

“It’s conference play, so we got to play our best basketball” he said. “We practiced great the last three days. We came out, and it showed.”

Wallace has notched one 35-point game this season along with six more with 20 points or better.

Henson said it’s almost like the player’s consistency leads to frustration, in that the coaches always expect the best from him.

“When he gets open shots, I think he’s going to make every single one of them,’ the coach said. “For a young guy, he’s got a very mature approach to his game, the way he handles his business.

“He works hard. He’s here early. He watches a lot of film. He prepares the right way.

“His athleticism is becoming very noticeable. We talked about him gaining 20 more pounds. But, man he’s up around the rim more. He’s going to the offensive glass and getting results. He’s blocking shots.