The Georgia State Crimson Panthers hit eight 3-point shots in the second half Saturday and held on for a 73-69 victory over the Texas State Bobcats.

Playing at home in San Marcos, the Bobcats jumped out to an eight-point lead in the first half and had the game tied with 12:49 remaining.

But a that point, in a battle of Sun Belt Conference contenders, the Panthers went on a 17-5 streak to gain the upper hand. 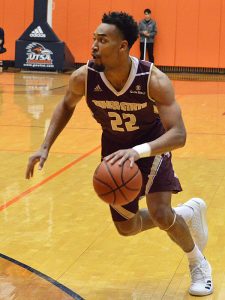 Nijal Pearson scored seven points during a first-half burst by the Bobcats but was held to 10 on the day. – photo by Joe Alexander, Dec. 1, at UTSA.

At the end, the Bobcats made it interesting, pulling to within three.

But D’Marcus Simonds hit a free throw with four seconds left for the final point.

Early in the first half, the Bobcats constructed a 17-6 run that included seven points by Nijal Pearson.

Chandler Davis capped the streak with an offensive rebound and a put back attempt and two free throws, lifting the Bobcats into a 21-13 lead.

Not to be outdone, the Panthers answered with a 13-3 spree to the halftime buzzer.

A layup by Simonds with two seconds left boosted Georgia State into a 26-24 intermission lead.

Georgia State turned the game in its favor with second-half three-point shooting.

After hitting only 1 of 10 from beyond the arc in the first half, the Panthers made 8 of 15 after intermission.