For the UTSA Roadrunners, an 0-5 start to the season is a thing of the past.

The Roadrunners won their fifth straight game and their second straight over UTEP in three days, downing the Miners 67-63 Saturday night in El Paso. 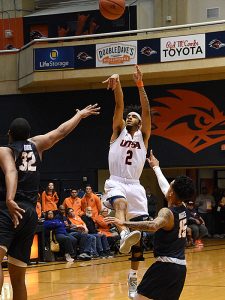 Guard Jhivvan Jackson has returned from inury to average 20.5 points per game this season. – Photo by Joe Alexander, Jan. 3 at UTSA.

Guard Jhivvan Jackson produced 24 points, 5 rebounds and 5 assists for the Roadrunners, who rallied from a 10-point deficit in the final 17 minutes.

“We went to that zone (defense) that we had in our back pocket,” Jackson told the team’s radio broadcast. “We worked on it. We just kept moving around and made ’em uncomfortable, and they weren’t making shots, and we just executed on offense.”

UTSA improved to 2-0 in Conference USA competition and to 8-2 in its last 10 since opening the season with the five straight losses.

Jackson sat out the first three games of the year as he completed rehabilitation from a knee injury.

The sophomore from Puerto Rico has returned to average 20.5 points in 12 outings. He’s scored 20 or more in nine of his last 10 games.

Keaton Wallace came alive in the second half with 11 of his 16 points. Wallace burned UTEP for 23 in a 75-60 victory Thursday night in San Antonio. Nick Allen, meanwhile, continued to play well with 14 points on 6 of 12 shooting. Byron Frohnen pulled down 13 rebounds.

“It was a good win, to go on the road and find a way.” — UTSA coach Steve Henson.