UTSA has been picked to finish ninth in Conference USA women’s basketball, according to the conference’s preseason poll announced Thursday. 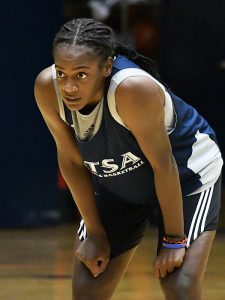 Newcomer Jordyn Jenkins leads UTSA into a regular-season opener at Stephen F. Austin on Nov. 7. Jenkins has been named to the preseason all-Conference USA squad. – photo by Joe Alexander

Roadrunners forward Jordyn Jenkins, a transfer from Southern Cal, has been named to the preseason all-conference squad.

According to the poll, which has been released out of the C-USA office, Middle Tennessee State has been picked to win the title, followed by Louisiana Tech and Charlotte.

The projected order of finish is as follows, with first place votes in parentheses and total points:

Preseason Player of the Year