Look who showed up at UTSA basketball practice today. Keaton Wallace, No. 2 on the school's all-time scoring list, is visiting for a few days before he reports to the LA Clippers' G League training camp. Please see our story. https://t.co/hyCDEtJChY pic.twitter.com/vFgoeJ0EvF

Five years ago, a skinny, a left-handed shooting guard from the Dallas area arrived at UTSA without much fanfare, but with a will to win matched by only a few players in school history.

Along with his four-year teammate, Jhivvan Jackson, Wallace forged a career that ranks as one of the university’s greatest, up there with the likes of Derrick Gervin, Devin Brown, Devin Gibson and Jeromie Hill. 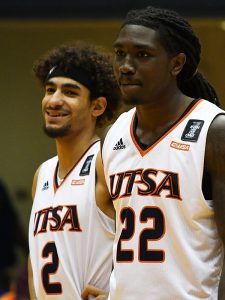 Given Wallace’s stature and his trademark humble, soft-spoken nature, his appearance at a UTSA practice on Tuesday afternoon seemed almost as cool as the breezes blowing through the oak and cedar.

Wallace entered the building just as Coach Steve Henson’s practice was getting underway. After speaking briefly with a reporter at courtside, he walked down and under the south end basket, circling toward the players’ side of the floor.

Once there, he found a ball, took a seat in a courtside chair and dribbled between his legs, all while taking in every nuance of the two-hour workout.

Afterward, Wallace met with the players, including two of his former teammates, seniors Jacob Germany and Erik Czumbel. He also met with Henson and other coaches who recruited him to campus out of Richardson High School.

Later, as he reminisced with a reporter, the nostalgia started to flow freely. First, the reporter told Wallace a story.

In 2017, UTSA had returned from a scrimmage at Sam Houston State, and coaches were buzzing about a freshman sharp-shooter. The buzz centered on Wallace, who had hit six three-pointers in Huntsville in his unofficial debut for the Roadrunners.

The performance was not a fluke.

Wallace went on to score 2,080 points. He also knocked down 715 field goals, including 346 threes. All three totals would rank second in school history to Jackson, his teammate and backcourt partner.

Known as the “UTSA Splash Brothers,” Jackson and Wallace led the Roadrunners to three winning records in four seasons.

Wallace, preparing to enter his second season in the NBA G League, came through San Antonio to spend some time before he returns to Southern California, where he will join the Clippers’ minor league camp in about a week.

“It’s really good to see everyone again,” Wallace said. “A lot of good memories here, a lot of good moments we had with the fans and the team and with the school. Just a lot of love.”

Most who remember the Jackson-Wallace era at UTSA will recall a home game against Old Dominion in which the Roadrunners erased a 17-point deficit in the final few minutes to win.

The building seemed to be shaking with noise after Wallace hit an off-balance three out of the corner during the rally.

“It was one of the greatest moments in the Convo,” he said. “We (were) down big in the second half, by 17, and we just found a way. We found a way to make it happen.”

Henson said that the start of Wallace’s career came up after practice when players gathered at center court.

“We were just talking about him, what he was like as a senior in high school and what he weighed when he got here as a freshman in college — 161 pounds — and how he transitioned into his sophomore year,” Henson said.

From his first year to the next, Wallace put in the time and put on some pounds. As a result, his scoring averaged rocketed from 11.4 as a freshman all the way to 20.2 as a sophomore in 2018-19, the first of three straight years in which he was named to the all-Conference USA second team.

“Keaton was guy who, right away when he got on campus, he did the things we’re talking to our guys about (now),” Henson said. “He took care of his body. Still does. Got his sleep. Ate right. Got his treatment. Put in tons and tons of hours shooting the basketball.

“He just had a mature approach to (taking care of) his body. Some guys get that. Some guys don’t.”

Though neither Jackson nor Wallace heard their names called in the 2021 NBA Draft, both are still playing professionally. After nearly a year rehabilitating a shoulder injury, Jackson spent a short time last summer in a Spanish pro league. He signed recently with a team in Belgium.

In 2021, Wallace played for the Memphis Grizzlies’ summer league team. Later, he was selected with the ninth pick in the second round of the G-League draft by the Wisconsin Herd. He was subsequently traded to the Ontario Clippers, where he finished the remainder of the G-League season.

In 31 regular season games, he averaged 18.1 points, 5.9 rebounds and 4.7 assists. Though Wallace was recently waived out of the Los Angeles Clippers’ camp, it’s possible that he could be a candidate for a call-up on 10-day, NBA contract sometime this season.

Wallace has always dreamed of playing in the NBA.

He mentioned it a few times during his UTSA career. It’s now even possible that he and his younger brother, University of Kentucky freshman Cason Wallace, could both be playing at the highest level some day.

All the emotions notwithstanding, Keaton Wallace said he can’t afford to dwell on being one transaction away from the big time when he knows that every-day improvement in his game is so crucial.

“It’s just part of being a pro,” he said. “You just come in every day, trying to get better. You try to go and, you know, just do your job. That’s how I see it.”