Wild possession for UTSA. A miss at the rim. An offensive rebound. And, finally, a slam by Josh Farmer. https://t.co/hyCDEtJChY pic.twitter.com/tFy3JShXAc

The UTSA Roadrunners celebrated a 74-47 season-opening victory against the Trinity Tigers Monday night, in part, by initiating a conversation about their next opponent.

As players filed into the dressing room after the opener at the Convocation Center, the talk turned quickly to the Texas A&M-Corpus Christi Islanders. 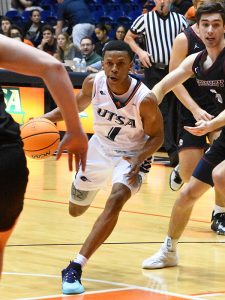 UTSA will play Game Two on its schedule at A&M-Corpus Christi on Friday night in a rematch of a contest played last year in San Antonio.

It’s a memory that isn’t a pleasant one for the Roadrunners’ veterans, because the Islanders dominated, 77-58.

UTSA players may also know that A&M-Corpus Christi went on to enjoy a storybook season, which ended in a Southland Conference title and a trip to the NCAA tournament.

Roadrunners newcomer Japhet Medor said some of his teammates have already told him about the Islanders’ style and personnel.

“They deny a lot of stuff,” Medor said. “They’re pretty aggressive, but we play aggressive, too. We like it.”

Medor said he thinks some of his teammates may take a scheduled off day and come in to work on their game.

“Tomorrow is an off day, and we got to treat it like it’s not an off day, to get our bodies right and get ready for Corpus Christi,” he said. 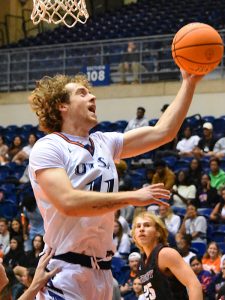 Junior forward Lachlan Bofinger came off the bench for four points and seven rebounds in a little more than 10 minutes. – Photo by Joe Alexander

Medor said he knows how teammates who played in the game last year are feeling.

Entering the regular season, UTSA had played only one exhibition. It was a game played last Wednesday against the Schreiner University Mountaineers. In doing so, the Roadrunners revved the offense and roared to a 93-60 victory.

Like Schreiner, Trinity is also an NCAA Division III program. But against the Tigers, the Division I Roadrunners had a tougher time putting points on the scoreboard. Much tougher.

UTSA shot 51.5 percent last week against the Mountaineers, including 42.9 percent from behind the three-point arc. Against the Tigers, the Roadrunners’ percentages didn’t look nearly as pretty on field goals (40.8) or on threes (16.7).

In fact, UTSA sank only 5 of 30 from long distance against Trinity’s zone defense.

Fortunately for the Roadrunners, big men Josh Farmer (17 points, 12 rebounds) and Jacob Germany (15 points, six boards) played with poise and aggression and got the job done against the much smaller visitors.

For Farmer, it was a breakout game, his first double-double. The former Houston schoolboy averaged only 1.2 points per game last season.

Against Trinity, he scored a season high on 8 of 13 shooting from the field. In addition, he also saved several possessions with his hustle, including six offensive rebounds.

UTSA 1-0
Trinity 0-0
x-Game played as an exhibition for Trinity. It does not count on the Tigers’ record. 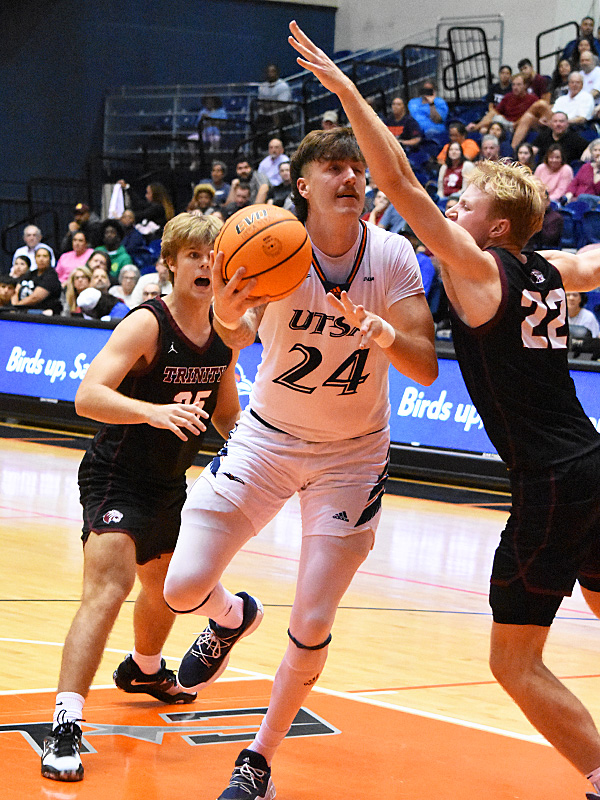