Newcomer Japhet Medor has emerged as one of UTSA's most consistent practice players. Here, he drives to draw the defense, kicks it out, gets the ball back and hits from beyond the arc. https://t.co/hyCDEtJChY pic.twitter.com/IPevqlie4n

On the court, UTSA senior Japhet Medor likes to consider himself as a pass-first point guard, a distributor of the basketball. A team player. First and foremost, he wants to win and to see his teammates, his brothers, have fun. 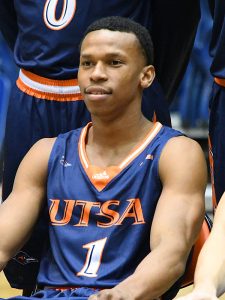 Japhet Medor is preparing to make his NCAA Division I debut with the UTSA Roadrunners. – Photo by Joe Alexander

Off the court, he’s a businessman, promoting his own clothing line, the “Top Floor Boyz.”

But perhaps more to the point of his own identity, Medor is a family man. As the youngest of seven siblings, he expresses gratitude for the guidance of his parents and all of his real-life brothers and a sister, who always provided him with a safe haven.

“It was like, for me, being around them, they’ve been in the same situations I’ve been in,” said Medor, 23, from Wellington, Fla. “A lot of them played sports and a lot — well, all of them — own a business for themselves.

“So just being able to pick their brain and know what and what not to do, growing up, was good. It was good for me. When there’s a hurricane day, you get to have fun with your family (and) stay in.”

Medor has always looked up to hoops icons like Kobe Bryant, Russell Westbrook and Steph Curry.

But, his career as a ball player all started with his sister, Vanessa, and his brothers, including Chris, Evens, Greg, Fred and Dean, all of them supplying him with the steady encouragement that he needed.

“My older brother (Greg) was definitely my mentor. (He) trains me, coaches me,” Medor said. “He always helps me out. My other brothers, they always pick my game apart. Like, if I’m playing, they’ll tell me what I’m doing wrong. (They’ll say) what I’m not doing right.”

By all accounts, the UTSA newcomer is getting it right on a pretty consistent basis in his first year of NCAA Division I. Chris, Evens, Greg and the others in the Medor clan should really have few worries about the baby of the family.

In fact, Medor is pushing during fall camp practices to become the Roadrunners’ starting point guard when the season opens in a few weeks.

UTSA coach Steve Henson has been happy with his progress since the summer. On Thursday, during a fast-paced practice that included about an hour of five-on-five, the 6-foot playmaker stood out as perhaps the best player on the floor at the Convocation Center.

“Today, I thought Japhet just had a different explosiveness about him,” Henson said. “I thought he had an extra gear today.”

It’s been a long, long journey through the basketball landscape for Medor, who was one of the nation’s top scorers and assist men in junior college last year at Hillsborough Community College in Tampa, Fla.

All told, the 2018 graduate of Lake Worth High School spent one year in prep school and three in community colleges, toiling away to make a name for himself.

Now, with the season set to start Nov. 2 in an exhibition against Schreiner and then a Nov. 7 home opener against Trinity, Medor is on the verge of realizing his dream. He’ll be a Division I point guard. Is he feeling the adrenaline? You better believe it.

But in keeping with his personality, he steers the conversation away from his own feelings and talks instead about his teammates. About the team’s dreams.

“With the feeling we have (on) the team right now … the coaching staff and the players, it’s got us fueled up and excited for the season,” Medor said. “Just seeing what everyone is doing right now (in practice), it’s amazing what we can put together.”

Medor is expected to set the tempo for UTSA’s attack with his speed.

“He sees the game and feels it,” Roadrunners associate head coach Mike Peck said. “He really wants to try to set up his teammates (by) hitting the open guy. He sees things before they happen sometimes. He makes plays for other players. Puts shooters in position to … catch and shoot. Which is huge for us. He’s been great in that regard.

“We knew he was fast. But when you see it up close and in person when you’re on the floor with him, it’s at a different level.”

UTSA coaches have also talked during the fall about the maturity and leadership that transfer guards such as John Buggs III and Medor will bring to the program. Peck said Medor’s maturity likely stems from the player’s close-knit family, but also from traveling a hard road to Division I.

“Coming here and having the resources, I think he has an appreciation for that, and that just adds to his maturity.”

UTSA assistant coach Scott Thompson made the initial contact with Medor last spring. Peck followed up with a visit and started to push to get him on the team as soon as possible. According to reports, he picked UTSA over Valparaiso, Stetson, Fordham and a few others.

Just as Medor made a careful decision on where to attend school this fall, he’s also wise to the world, Peck said.

“He’s definitely got that free-enterprise mindset,” the coach said. “He likes fashion and what’s trendy. He’s tuned into that, like a lot of kids. But even more so with him.”

Medor said he and a friend started the Top Floor Boyz business through a casual conversation a few years ago.

“Like, when we were around each other, we’d always say (it), Top Floor Boyz,” he said. “About 2018, we started an LLC for it, and we started pushing it. Wherever I go, I’ll wear Top Floor Boyz. I’ll push it. I’ll wear my own brand. Stuff like that.”

Medor is also expected to push the pace for the Roadrunners’ offense. Combined with Christian Tucker, the UTSA attack will have two problems for which opposing defenses will need to contend.

In Medor, the Roadrunners have a player who knew from an early age how he wanted to play the game. He was a teammate in high shool with Trent Frazier, a former star at the University of Illinois.

Watching Frazier helped Medor understand how much impact he could have on a game just by hitting the open man with a sweet pass.