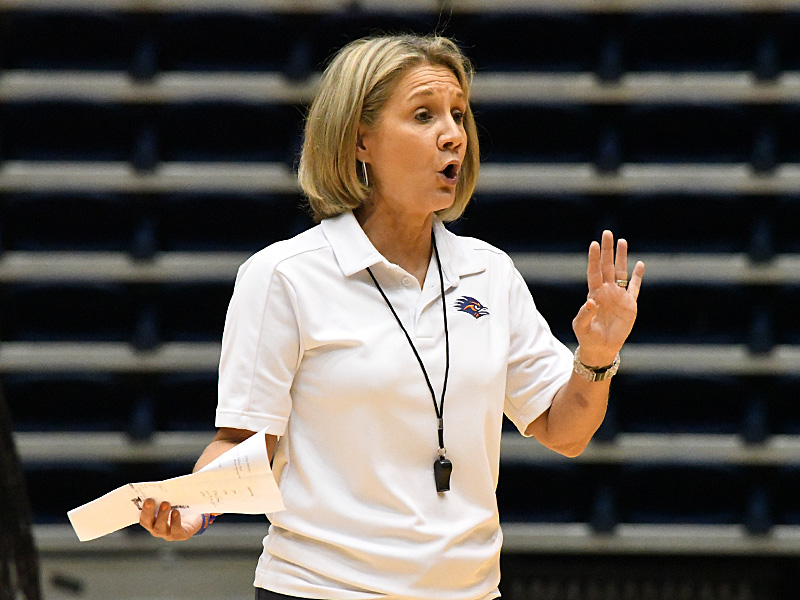 UTSA coach Karen Aston is monitoring the progress of her five talented freshmen 20 days out from a Nov. 7 season opener at Stephen F. Austin. – Photo by Joe Alexander

With five talented freshmen among eight newcomers on her team, UTSA women’s basketball coach Karen Aston has known for some time now that she would need to be patient during the fall preseason camp.

Aston is going through one of those stretches now. Exactly 20 days out from a Nov. 7 season opener at Stephen F. Austin, the coach is making the most of the time allotted to teach the game.

“We had a full scrimmage last week against the guys and there (were) some glaring weaknesses that we needed to address,” she said Tuesday morning. “I think the last couple of practices, we’ve done that.

“It’s like plugging holes,” Aston said. “You figure out something that you need to get better at, and you work on that, and then another (issue) comes up.

“We just have so many new faces, with so many freshmen, the information overload is upon them with the wear and tear of preseason practices. In 20 days, regardless of whether we’re ready or not, it’s like, we got to start playing.

“You got to go and start to get the feel of what this is going to be like. You can talk about it in practice, but, when they get in the games, it starts to resonate a little more.”

Guard Sidney Love from San Antonio-area Steele leads the UTSA freshmen. She is seeing the floor quite a bit during workouts and, with an advanced offensive game, looks to be bidding to start the opener.

A few days ago, Spurs coach Gregg Popovich talked about how he planned to throw some of his young players “into the frying pan” to see what they could do.

“That’s exactly what’s going to happen with us, with these freshmen,” Aston said. “Some are moving along a little quicker than others.

“Some are better in some areas. Some can shoot the ball really well but they don’t exactly know the pace or the physicality, so they’ll come around, each one of them probably on their own clock.”

Though Aston hasn’t named names exactly on her projected starting five, Love likely is in serious contention to start.

“I think she’s starting to figure some things out,” Aston said. “I thought she went through a pretty rough patch last week on probably just the load of practice, the pressure, all of that.”

Love has been better this week as two older, more experience players — Kyra White and Hailey Atwood — step up their repetitions in practice after sitting out team drills for much of camp in August and September.

As both work their way into shape, Love is responding.

“Having (junior transfer) Kyra White and Hailey back at practice has helped her tremendously,” Aston said. “It should help all the young ones, because (the freshmen) have been plugging along without any role models, so to say.

“I think having those two back has really helped (Love). It’s taken a little pressure off her shoulders.”

For much of the early fall workouts, Love handled most of the load at point guard.

White, a San Antonio-area Judson grad and a 5-9 junior transfer from Southern Cal, initiated the offense quite a bit at Tuesday’s workout. With White at the point, Aston had Love on the wing at a shooting guard.

“Moving her to the two and sometimes lightening that load, has been really good for her,” Aston said. “She seems to be having a better week this week because Kyra’s back.”