Quietly, UTSA forward Isaiah Addo-Ankrah served as an inspiration to his teammates for all the extra time he spent working on his game in the offseason. 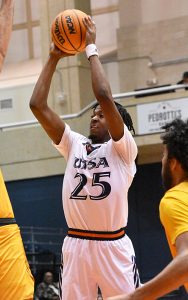 UTSA forward Isaiah Addo-Ankrah played in all 11 games this season and averaged 7.3 points before an X-ray revealed a wrist fracture that would keep him out four weeks. — File photo by Joe Alexander

In early September, for instance, the UTSA women’s basketball team usually worked out in the morning hours, followed by the women’s volleyball squad in the early afternoon, followed later in the day by Addo-Ankrah and his friends in men’s basketball.

Sometimes, a visitor would show up in the morning thinking that Coach Karen Aston’s women’s basketball squad would be on the floor, only to discover that it was a scheduled day off.

Instead, the visitor would walk in to a nearly empty gym to the sound of squeaking shoes, with a couple of Coach Steve Henson’s men’s team players taking advantage of the open court to get up extra shots.

One day, it was Addo-Ankrah, who explained later that he’d committed to complete a couple of challenges from coaches — to make 10,000 3-pointers, outside of scheduled practices — in two different segments of the offseason.

As a consequence, the Houston native was in the gym up to three times a day from June through September. It was disheartening, in that regard, for the Roadrunners to learn recently that a fractured wrist 11 games into the season will sideline Addo-Ankrah for four weeks.

“It’s really disturbing to hear that,” UTSA guard John Buggs III said on the eve of the team’s Conference USA opener against North Texas. “Isaiah’s probably one of the more hard-working players on our team.

“He doesn’t have as many (natural) gifts as other people athletically, but, man, his work ethic … It’s just so heartbreaking for him. We hate that for him. Hopefully he’ll get well as soon as possible.”

The renewal of the hotly-contested, in-state rivalry between the Roadrunners and the Mean Green will take place on Thursday night at UTSA. Fortunately for UTSA, center Jacob Germany is expected to play.

Germany suffered a nasty-looking ankle sprain on Sunday afternoon in the Roadrunners’ 90-69 victory over the Bethune-Cookman Wildcats. UTSA (6-5) had a day off on Monday and then practiced Tuesday and Wednesday in preparation for the defending C-USA regular-season champions.

Led by guards Tylor Perry and Kai Huntsberry, North Texas (9-2) has won four in a row on the season. In addition, the Grant McCasland-coached Mean Green have won six out of eight against the Roadrunners in the series over the past five seasons.

Henson discussed his team’s preparations and his personnel issues after a two-hour drill Wednesday afternoon.

“We didn’t do much, up and down, either day,” Henson said. “As much as we’d love for there to be some pace in the game tomorrow, we don’t anticipate there will be a lot of pace, so we did a lot of stuff on the halfcourt, offensively and defensively. Jacob was able to do most of it both days.

“He looked progressively better today than he did yesterday, so I don’t think he’ll be 100 percent, but he’ll play.”

Addo-Ankrah apparently had been playing with some discomfort in his left (non-shooting) wrist for some time. Because of lingering pain, a new X-ray was ordered. It revealed a fracture.

“He’s going to miss about four weeks,” the coach said.

The circumstances on how Addo-Ankrah suffered the injury weren’t immediately clear.

“He injured it a long time ago,” Henson said. “Initially, it didn’t show a fracture. He started feeling a little better. But he wasn’t quite getting over the hump there, so they re-X-rayed and they found a small fracture.”

For the season, Addo-Ankrah had played in all 11 games with eight starts. A three-point shooting specialist, he was fifth on the team, averaging 7.3 points.

Though Addo-Ankrah made a season-high four triples on Sunday afternoon against Bethune-Cookman, his shooting percentages were down from last season, as he was hitting .366 from the field and .313 from three.

Henson didn’t specify how he planned to fill the 23.5-minutes per game void. But, likely, players such as Aleu Aleu, Lamin Sabally and Lachlan Bofinger will need to step up.

“I think (Isaiah’s) presence will be missed as far as spacing the floor and creating driving lanes, that type of thing,” Buggs said. “But we have other guys that can get in the lane or attack the paint, affect the game with offensive rebounding, that type of stuff.

“I think we have guys that are ready to step up and take on a bigger role.”

Buggs said it’s a good sign for the team to see the efforts that Germany made to practice on Tuesday and Wednesday afternoon.

“It just sends a message that we’re all about being tough and trying to grind it out, and do whatever we need to do to win,” Buggs said. “I feel like, with Jacob playing, that puts us in the best position to win.”

North Texas’ top players are guards Perry and Huntsberry, with 6-10 power forward Abou Ousmane playing inside. Buggs said he was Ousmane’s teammate years ago in Connecticut at the Putnam Science Academy.

“He was one of my best friends in prep school,” Buggs said.

Buggs said he talked to Ousmane recently, likely in the days before the Bethune-Cookman game. “He was calling, talking noise,” Buggs said. “He was throwing (verbal) shots. I said, ‘Hey, we ready.’ It’s going to be a good test for us tomorrow. Definitely.”

The Mean Green have won at least 20 games in four of the past five seasons under McCasland. They reached the NCAA tournament in 2021 and advanced to the round of 32.

Last year, they finished 25-7 and 16-2 in the C-USA. North Texas played in the NIT, defeated Texas State and then lost to Virginia in the second round.