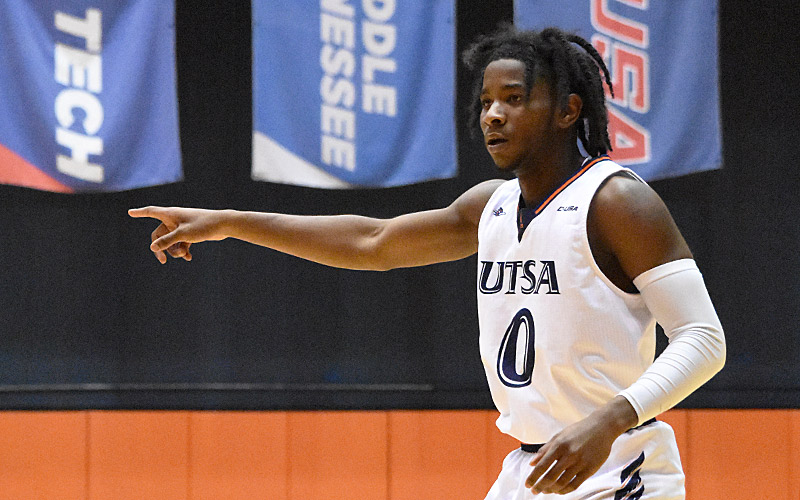 UTSA’s John Buggs III says his good friend Abou Ousmane of the North Texas Mean Green has been playfully ‘talking noise’ on the eve of tonight’s game at the Convocation Center. – Photo by Joe Alexander

If you ask John Buggs III a question, it’s almost guaranteed that you’ll get an interesting answer, around which he almost always spins a yarn about his life in basketball.

For instance, I asked Buggs yesterday about playing tonight at the UTSA Convocation Center against the North Texas Mean Green.

It’s the Conference USA opener for both Buggs and the UTSA Roadrunners and the Mean Green, who have been a dominant force in the league for the past five seasons.

As a newcomer in the UTSA program, Buggs has yet to experience what it’s like to host the Mean Green at the Bird Cage.

Other than last season when North Texas dominated in a 59-48 victory, the UTSA-North Texas games played in San Antonio recently have been close, coming down to one or two possessions in the final minutes.

The crowd, as you’d expect, has usually been animated and vocal.

I was curious to get Buggs’ take on the rivalry, and what the game means to him at this juncture of an up and down season for the Roadrunners.

Also, what it means to him, to get a crack at the defending conference regular-season champions on opening night.

“I feel like we’re very excited,” Buggs said. “It’s an unbelievable opportunity that we have. We can definitely open a lot of eyes by getting a win, you know.”

It’s been a tough deal for UTSA to get many wins against North Texas lately.

In five previous seasons under Coach Grant McCasland, the Mean Green have posted a 6-2 record against the Roadrunners, including 3-2 in San Antonio.

Since 2017-18, North Texas has won handily in all three games against UTSA in Denton, all by double digits. In San Antonio, as mentioned, the games have been hotly contested for most of the 40 minutes on the game clock.

For instance, in December 2017, UTSA freshmen Jhivvan Jackson and Keaton Wallace and Co. battled to the end before North Texas made a few plays and won, 72-71.

In January 2019, Jackson hit a memorable, spinning jump shot in the final seconds to lift the Roadrunners to a 76-74 victory.

Two years ago, during the pandemic season, North Texas played at UTSA on back-to-back nights. The Mean Green pulled out a 77-70 decision on the front end of the double dip.

But UTSA bounced back the next night to exact revenge, winning 77-69 against a North Texas team that would go on to play in the NCAA tournament.

Last season, North Texas was all over UTSA at the Bird Cage with a smothering defensive effort. It was all Mean Green down the stretch in a 59-48 drubbing.

Buggs likely doesn’t know all the history, but he does know a little about this year’s North Texas squad based on film study.

He knows North Texas is a quality team, one of the best in the nation defensively, and that a win tonight for UTSA could really alter the trajectory of the season.

“I’m really excited,” Buggs said, a smile creasing his face. “One of my (former) teammates plays on their team, so we’ve been talking back and forth a little bit.”

Who does he know?

“Abou Ousmane,” Buggs replied. “We played together for a year at prep school.”

At the Putnam Science Academy?

“Yeah, he’s a little younger than me,” Buggs said. “But we were at the same prep school for a little while. Last year, when I was at Juco (at Hill College, in Hillsboro) I went to watch him play (in Denton) many, many times.

“(Ousmane) was one of my best friends in prep school. So, you know, we got a little duel going on (this week).”

If you think about it, the Buggs-Ousmane reunion is quite a hoops coincidence. Buggs is from northwest Louisiana and Ousmane, a 6-10 forward, is from Brooklyn, N.Y.

Both played together at the prep school in northeast Connecticut for one year, became friends and now they’re on opposite teams for a bragging-rights type game, scheduled to be contested in San Antonio, a few days before Christmas in 2022.

“We definitely have kept in touch,” Buggs said, smiling. “It’s going to be a show (tonight) for sure.”

So, have you talked to him or texted in the last several days?

“Yeah, I talked to him two days ago?” he said in an interview Wednesday at UTSA. “Actually before the Bethune-Cookman game (last Sunday), he was calling, talking noise. You know, he was throwing (verbal) shots. I said, ‘We ready.’ It’s going to be a good test for us tomorrow.