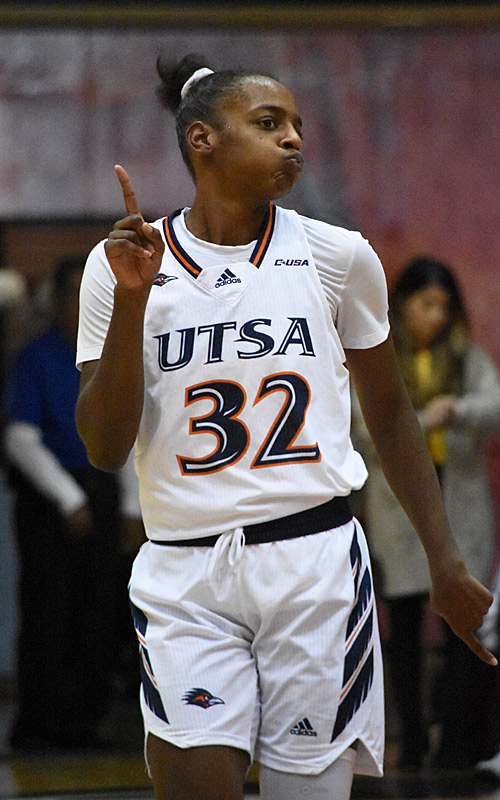 Jordyn Jenkins had one of her best games as a UTSA player with 22 points, eight rebounds, four assists and three steals. – Photo by Joe Alexander

The formula for Jordyn Jenkins’ success on Saturday afternoon was pretty simple. UTSA’s rising standout in women’s basketball made good decisions with the ball. When the 6-foot-1 junior forward wasn’t passing for an assist, she was swinging it to a teammate.

Then, when the traffic cleared, and the ball returned to her hands, she’d either make the Idaho Vandals pay by sticking an easy bucket from close range or by hitting a jumper from the perimeter. 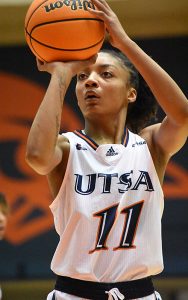 Unlike previous games when she was saddled with early foul trouble, she stayed away from those agonizing whistles in scoring a team-high 22 points for the Roadrunners in a much-needed 76-69 victory.

“Mostly when it comes to me fouling, they’re offensive fouls,” Jenkins said. “Like, very rare (are they) defensive fouls on the shot. I mean, I really try not to foul anyways. I feel like I have good body control.

“So, I just kind of have to keep that in mind and also have the mindset that I can’t foul. It helps when the team defense is good, then there’s less pressure on me.”

In losing five of six games to start the season, including three in a row, the Roadrunners’ team defense was not good. UTSA coach Karen Aston said as much on the eve of a match with the Vandals of the Big Sky Conference.

A 60-55 loss at Texas State on Nov. 30, when UTSA sqauandered an early 12-point lead, was still front of mind through nine days of practice between games. After holding Idaho to 33.3 percent shooting from the field, though, Aston felt much better.

“Well, I think we were ready to play,” the coach said. “After the bad taste we had in our mouths at Texas State, unfortunately for the players, we had a long break. We did a lot of practicing. I think we accomplished some things … I (think) our defense is improving. Attention to detail is improving. 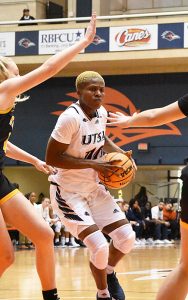 Senior Queen Ulabo came off the bench against Idaho and sparked UTSA with a season-high 15 points. – Photo by Joe Alexander

“I thought some adjustments we made during the game made a difference. I thought Jordyn adjusted as the game went along. You can tell every game, people have a game plan on her, and what they’re going to do with her. I thought she made a lot of extra passes today and didn’t force things.

“She kind of took what they gave her.”

With Aston starting three freshmen (Sidney Love, Alexis Parker and Maya Linton) and playing with as many as three on the floor at a time through the game, the young Roadrunners responded, building a lead as large as 19 points early in the fourth quarter.

At the outset, they set the tone, opening with three former San Antonio high school players in the backcourt — Love (from Steele), Parker (Brandeis) and junior Kyra White (Judson). Up front were Jenkins, from Kent, Wash., and Linton from Duncanville High School.

When White tweaked an ankle early in the first quarter, she hobbled off the court, returned briefly and then was shut down for the remainder of the afternoon. It was a situation that could have been disastrous, because the 5-10 USC transfer has been one of the team’s most productive players.

But even with White on the bench, the Roadrunners brought in players determined to win, all making plays, hitting shots and gradually building the lead. At the end of the first quarter, it was 18-14. By halftime, it was 37-28. 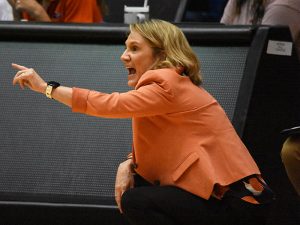 Karen Aston’s UTSA Roadrunners improved to 2-5 for the season and 2-0 at home in the Convocation Center. – Photo by Joe Alexander

Four freshmen — Parker, Love, Siena Guttadauro and Madison Cockrell — had a hand in an impressive 11-0 run to the halftime buzzer. In the second half, the Roadrunners kept up the pressure by hitting the Vandals with another 11-0 streak, this one at the outset of the fourth quarter.

Junior Queen Ulabo started it off with a three out of the corner. Love, the prep player of the year in the San Antonio area last season, capped it with her own corner three that hiked the score to 65-46 with 6:16 remaining.

Jenkins, meanwhile, imposed her will at almost every turn. In reaching the 20-point mark for the third time in her last four games, she hit eight of 13 shots from the field in the face of an assortment of traps and double teams.

Jenkins also had eight rebounds, four assists and three steals. And, what about fouls? She was whistled for only one, while drawing seven from the Vandals who were doing their best to defend a player with significant skill and touch on her shot.

In postgame interviews, she said she’s dealing with the extra attention from opposing teams as best she can.

“Like coach said, I’m going to just have to take whatever the other team gives me,” said Jenkins, now averaging 18.4 points per game. “I’ve noticed on the court (it’s) a lot more blurry, with a lot more people in my vision, so, in order to make myself better … whatever I do, it needs to be quick.

“Getting my teammates open is what I need to do a little more, just because they’re doubling me.” 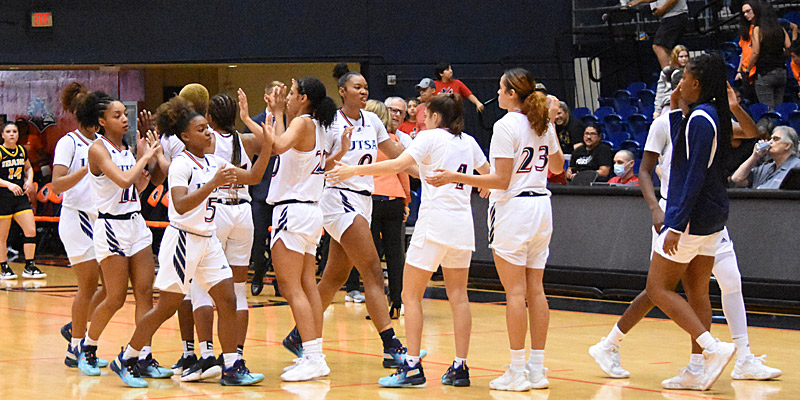 The UTSA Roadrunners did a nice job in holding the Idaho Vandals to 33.3 percent shooting from the field and 32.1 percent from three. But once again, they allowed their opponent to take too many trips to the free-throw line. Idaho hit 20 of 26 free throws for the game, including 15 of 17 in the second half. UTSA, playing at home, made 14 of 21 freebies. – Photo by Joe Alexander

The five UTSA freshmen that Aston brought into the program over the summer all made their mark against the Vandals. Love had 17 points, five rebounds and two assists. Parker played the most minutes of any of them with 31. She had five points, three assists and a steal. Linton, tasked with guarding Idaho scoring whiz Beyonce Bea, had four rebounds. Off the bench, Cockrell had three points and a steal. Guttadauro finished with three points, hitting from behind the arc on a chaotic play at the end of the first half.

Senior guard/forward Queen Ulabo had a big day offensively, coming off the bench to score 15 points in 25 minutes. Ulabo made five of eight from the field and four of six from three. Her four three-point baskets were a season high.

Guard Sydney Gandy and forward Beyonce Bea led the Vandals with 23 points apiece. A 6-1 forward who likes to play on the perimeter, Bea came into the game eighth in the nation in scoring, averaging 22 per game. UTSA did a decent job in holding her to four of 16 shooting from the field. Bea made UTSA pay, though, in hitting 15 of 18 at the free-throw line. Gandy sank eight of 19 afield, including five of 13 from three.

UTSA freshman Alexis Parker one-hops a pass to Elyssa Coleman, who converts with a bucket late in the first half. Roadrunners, 37-28, over the Idaho Vandals at halftime. https://t.co/hyCDEtrt3Q pic.twitter.com/mvMS9pSbuZ

Freshman Siena Guttadauro caps a chaotic possession for UTSA with a three from the top of the circle. https://t.co/hyCDEtJChY pic.twitter.com/bxZedRb9bz

Love is all you need

UTSA freshman Sydney Love takes a defender off the dribble and scores in the fourth quarter. Love has 13 points. and the Roadrunners lead the Idaho Vandals, 65-49.
https://t.co/hyCDEtJChY pic.twitter.com/p5teVM6y3l

Sorry about the misspelled name in my fourth-quarter tweet (see above). UTSA’s freshman point guard is Sidney Love.