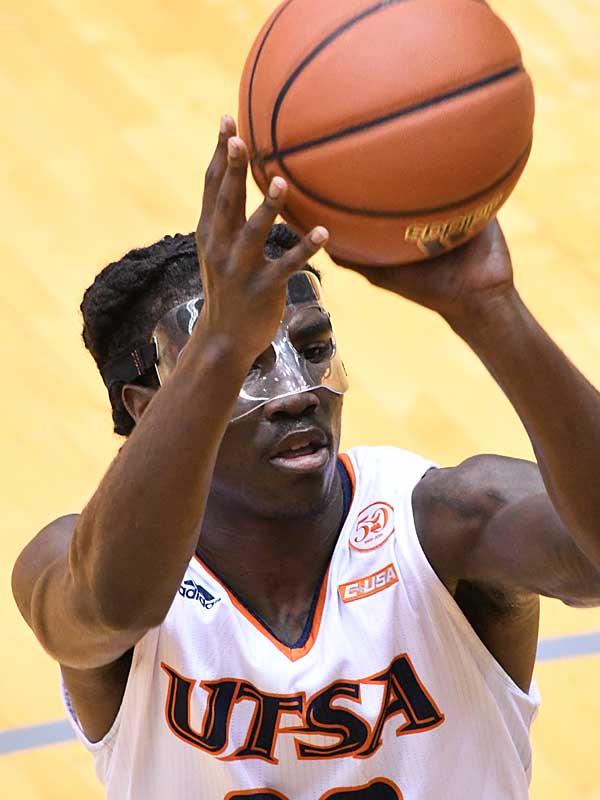 UTSA guard Keaton Wallace played in Sunday’s game with a mask after being hit in the face in practice on Saturday. – photo by Joe Alexander

On a sleepy Sunday afternoon at UTSA, junior guards Jhivvan Jackson and Keaton Wallace put on another show for the home fans, just as they’ve done for the past two-plus seasons.

This time, the show came with a few twists.

Jackson, a diminutive 6-foot guard, turned into something of a rebounding machine with a career-high 14. Wallace emerged as a masked marauder of sorts.

He wore a plastic mask as protection after taking a shot to the nose in practice on Saturday.

Wallace broke out of a 3-point shooting slump with a season high five long balls.

As a result, the Roadrunners extended their winning streak to three games with an easy 98-55 victory over NCAA Division II UT Permian Basin.

Early in the day, the energy in the Convocation Center was minimal, with an announced crowd of 708 in the building.

On top of that, both teams seemed not completely prepared for a 3 p.m. tip off.

Stepping up the intensity, the Roadrunners called on freshman Jacob Germany to spark the team midway through the first half.

Germany had two points, a rebound and three blocked shots in a five-minute sequence.

In the meantime, Wallace and Jackson started to roll.

Wallace hit four 3-pointers before halftime for 15 of his 18 points. Jackson scored 13 in the first half, en route to a monster show of 28 points and 14 rebounds.

UTSA will play in Houston on Wednesday against the Oregon State Beavers. The game is set for 4:30 p.m. at the Toyota Center, home of the NBA Houston Rockets. The team returns to the Convocation Center on Saturday to meet Illinois State.

UT Permian Basin was playing its second game in two days. The Falcons won at home against Cameron in Odessa on Saturday afternoon, and then made the trek to San Antonio for the non-conference road game.

UTSA took full advantage of the situation, cranking up its offense for season highs in points in a game and in a half (58, in the second half).

The Roadrunners also knocked down a season-high 14 three-pointers, including a 3-for-3 effort from sophomore guard Adokiye Iyaye, who scored a personal season high of 11 points.

As a team, the Roadrunners nailed 14 of 29 from beyond the 3-point line to continue a three-game hot streak.

In victories over Texas A&M-Corpus Christi, Texas State and UTPB, they have made 31 of 67 from distance (46.2 percent).

By comparison, the Roadrunners connected on only 27.7 percent from long range (41 of 148) during a season-opening, five-game losing streak.

UTSA coach Steve Henson, on Wallace’s performance in the mask:

“Didn’t seem to bother him too much. He made three or four threes in the first half. Told him we may just turn him into Rip Hamilton and let him wear it for awhile.”

(Hamilton, who wore a protective mask during much of his 14-year NBA career, was regarded as one of the game’s deadliest long-range shooters. He made 530 three-pointers in 921 NBA games. He retired after the 2012-13 season.)

Henson, on the team winning four of five games after opening the season with five losses:

“Had some struggles in some areas. Just trying to address those. Trying to find something to help establish an identity. To give us a chance to be a really good team. I think we made some progress this week. But it’s still a work in progress.”

Keaton Wallace lobs to Jacob Germany for the slam. UTSA leads UT Permian Basin 14-7 with 11:58 left in the first half. pic.twitter.com/a6Qn5rD5jX