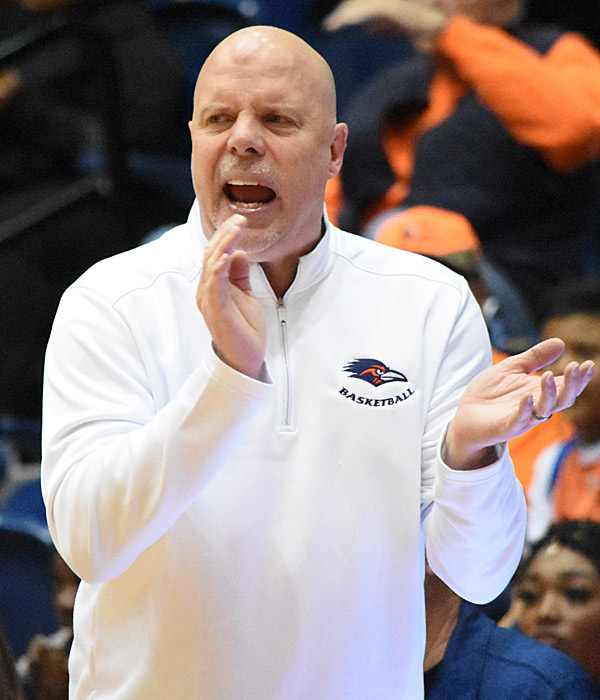 Steve Henson’s UTSA Roadrunners not only will need to hit some shots tonight, they’ll likely need to hit the defensive glass hard to have success against the North Texas Mean Green. – Photo by Joe Alexander

Starting Conference USA play without one of his top three-point shooters and with his starting center likely hindered by a sprained ankle, Coach Steve Henson and the UTSA Roadrunners will host the North Texas Mean Green tonight at 7.

Henson said his players are ready.

“Our mindset is pretty good right now, excited,” the coach said Wednesday. “It’s kind of another start. You kind of go through different phases in a season. Certainly the start of league play is a big deal. Guys have had some good practices. I think we’re locked in and ready to go.”

In their last game, the Roadrunners (6-5) found an offensive groove in downing the Bethune-Cookman Wildcats 90-69. Since that Sunday afternoon game, the team has had to face up to some adversity, with three-point shooting specialist Isaiah Addo-Ankrah ruled out for four weeks with a wrist fracture.

Also, center Jacob Germany twisted his ankle against the Wildcats, so the 6-foot-11 senior might not be full speed for the Mean Green (9-2). It’s not a great time to be at less than full speed, because North Texas has won 20 or more games in four of the last five seasons.

They won 25 last year. In doing so, the Mean Green claimed the regular-season title in the C-USA with a 14-2 record. They went on to play in the NIT, downing Texas State and then falling to Virginia in the second round. This season, the Mean Green look as salty as ever.

They’re holding teams to 51.6 points per game, which ranks second nationally behind only the Houston Cougars. Also, they’re 18th in offensive rebounding and 23rd in field goal percentage defense.

“We’ve got a great deal of respect for North Texas,” Henson said. “It’s a huge test for us right out of the gate.”

Under sixth-year coach Grant McCasland, the Mean Green play a deliberate style designed to wear down and frustrate opponents. They beat UTSA twice last year using that very formula, holding the Roadrunners to fewer than 50 points in games played in Denton and San Antonio.

This year, they’ve held opponents under 50 four times. The Saint Mary’s Gaels solved the Mean Green mystery earlier this season, winnning 63-33 in Moraga, Calif. But the Gaels, incredibly, are the only team to eclipse 60 points on North Texas thus far.

“It’s a whole combination (of things),” Henson said. “It all fits together very well. Pace gets your attention initially. Yesterday, KenPom (advanced metrics) had them as the second-slowest team in the country in number of possessions.

“You know, part of that is that they’re hard to score on. So that affects the number of possessions. It’s not just about them having long possessions offensively, but they also do that. So it’s a bunch of factors. It’s a very unique style of play.”

North Texas — Guard Tylor Perry, a first-team all C-USA pick last year, leads the Mean Green in scoring at 17.7 per game. He’s adept at knocking down jumpers late in the shot clock. Also, newcomer Kai Huntsberry is enjoying a solid season in his first year in Denton. He’s second in scoring at 12.6. Forward Abou Ousmane, who played with UTSA’s John Buggs III in prep school, averages 11.2 points and a team-high 6.3 rebounds. Ousmane, Aaron Scott and Jayden Martinez (from Steele HS) are all significant threats on the offensive glass.

UTSA — Point guard Japhet Medor leads UTSA with 12.4 points, 4.4 rebounds and 3.9 assists. Jacob Germany, who tweaked his ankle in the second half Sunday against Bethune-Cookman, averages 11.7 points and 7.4 rebounds. Without injured Isaiah Addo-Ankrah, John Buggs III and D.J. Richards will need to hit some perimeter shots to keep UTSA in contention tonight. Buggs is averaging 9.8 points and Richards 9.5. Richards leads the team in three-point percentage at 41.4.