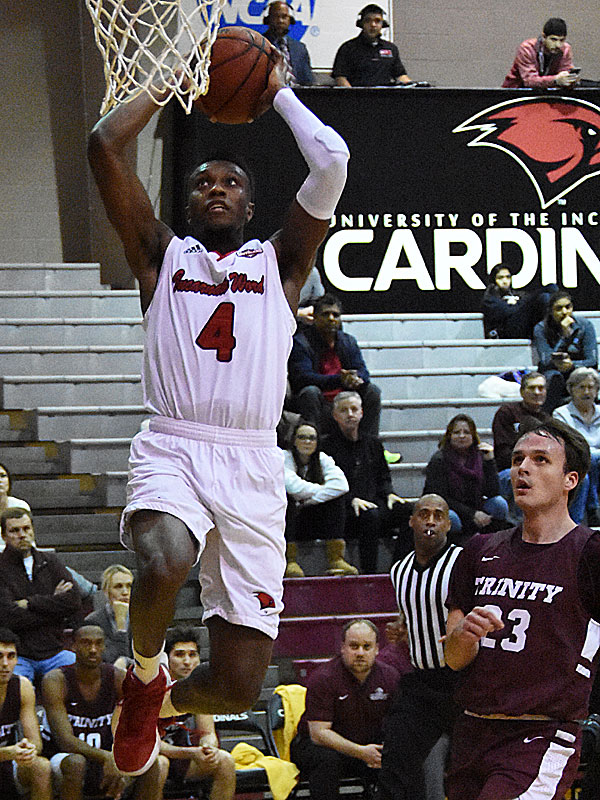 Over the past three games, Christian Peevy has played the best basketball of his career for the Incarnate Word Cardinals.

But in what may come as bad news for opponents on UIW’s schedule this season, the sophomore forward from Chicago still probably hasn’t hit his peak.

First-year Cardinals coach Carson Cunningham said he’s trying to figure out how best to get Peevy in position to score.

“He’s a potent weapon,” Cunningham said, after Peevy produced 23 points and 11 rebounds in an 82-57 victory over Trinity. “He does a few things particularly well, and he’s developing an all-around game from that.

“We just got to try to keep trying to find spots and wrinkles where he can excel, because he’s a dynamic player.”

Peevy sank 8 of 13 from the field and 7 of 7 from the free-throw line to boost UIW past Division III Trinity.

He has now scored 81 points in his last three games.

“It’s really all my teammates,” Peevy said. “They trust me with the ball, and I’m just so happy to convert. I just want to keep this roll going.”

The Tigers took leads of 3-0 and 6-5 on a couple of three-point baskets but couldn’t keep up with the bigger and more athletic Cardinals, who play in the NCAA Division I Southland Conference.

UIW built a 14-point halftime lead and then boosted it to as many as 27 in the final minute.

For the game, the Cardinals shot 54 percent from the field and blew away the Tigers with a 20-2 edge in fast break points.

Early on, it wasn’t pretty, as Trinity used a zone to flummox UIW’s dribble-drive attack.

“They did a good job of jumping some passing lanes,” Cunningham said. “Then I thought we started pass faking better. They have a nice motion offense, good cutting action.

“They run a good operation at Trinity. Coach (Pat) Cunningham has been doing it for a long time, and doing a great job.”

Incarnate Word (5-5)
Trinity (0-7)
(Note: The game was an exhibition for Trinity, and it did not count on the Tigers’ win-loss record.)

UIW guard Augustine Ene makes the most of a broken play when he grabs a loose ball and soars for a resounding dunk.

The Cardinals play the LSU Tigers in Baton Rouge on Sunday at 1 p.m. They also play at Illinois-Chicago on Dec. 17 and at DePaul on Dec. 19 before taking an extended break. UIW opens Southland Conferene play Jan. 2 at home against McNeese State.

Last month, the Cardinals’ defense yielded 83.1 points in six games against D-I teams. In its four games against Division III, counting the Trinity game, UIW has given up an average of 54.8 points.

Sophomore guard Keaton Hervey, a starter for most of last season, is expected to take a redshirt this season after knee surgery.

UIW forward Christian Peevy fakes out a defender on the perimeter and gets to the basket for two of his game-high 23 points.

UIW — Forward Charles Brown III, 12 points and 6 rebounds. Guard Augustine Ene, 8 points, 5 rebounds and 2 steals. Off the bench, guard Jorden Kite, 11 points on 3 of 6 from the three-point arc; also, forward Antoine Smith Jr., 10 points on 4 of 5 shooting, including 2 of 5 from three.

Trinity — Tyler Peavy, 11 points on 4 of 9 shooting, including 3 o 7 from three. A.J. Clark, Stephen Molina and Matthew Colliflower, 7 points each. Clark, a freshman from Johnson, also had 4 rebounds, 3 assists and a steal.

The UIW Cardinals move the ball from side to side on a possession in the secocnd half before finding guard Jorden Kite, a junior from Clark, who buries a three-pointer.