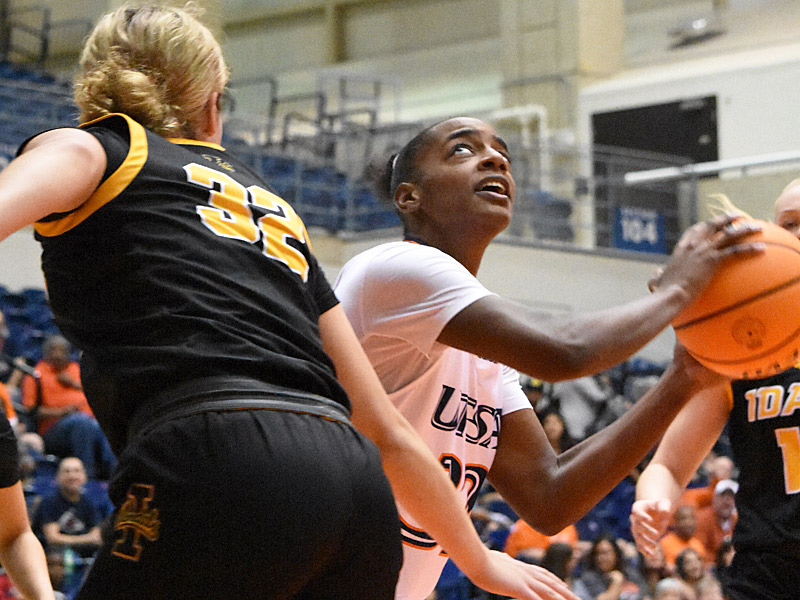 More than a week has passed since a remarkable women’s college basketball game unfolded at the Fertitta Center in Houston.

In the beginning, the Houston Cougars roamed the passing lanes and pounced on just about every pass thrown by the young UTSA Roadrunners.

An early lead for Houston ballooned to 10. Then to 15. As UTSA kept throwing the ball away, the advantage for the home team widened to 21.

It was only the second quarter, and it looked as if the Cougars might win by 30 or 40 or more. Well, let’s just say that it didn’t quite work out that way.

With UTSA junior forward Jordyn Jenkins putting on a show en route to a career-high 35 points, the Roadrunners opened eyes by unleashing a monster rally, coming all the way back into a few second-half tie scores, before losing 93-89 in overtime.

In one sense, the Houston game is ancient history. It was played nine days ago. Before Christmas. Back before the arctic blast.

In the present tense, the weather has warmed again, and UTSA (2-7) is back home at the Convocation Center, hoping to start a winning trend to coincide with the start of Conference USA play.

Eager to put all those pre-conference losses behind them, Roadrunners are preparing to host the Louisiana Tech Lady Techsters (7-4) on Thursday night, before they entertain the UAB Blazers (8-2) on Saturday afternoon.

Coaches and players keep talking about Houston. Aston played the tape of it for her players’ again on Tuesday morning.

The video showed two versions of the Roadrunners.

One of them failed to answer the call after the opening tip, committed numerous turnovers and eventually fell behind, 39-18, midway through the second quarter.

The other played with heart and rallied on a 32-11 streak over a 13-minute stretch that spanned the end of the second and most of the third periods.

That same team battled to the end, with standout performances from several players, including double-digit scoring efforts from Jenkins, Elyssa Coleman, Kyra White and Alexis Parker.

“We re-watched (the tape) this morning,” Aston said late Tuesday afternoon. “What I still don’t know is, what turns their motors on? I mean, I don’t know if they were nervous to start the game, or what.

“They looked a little bit frozen, and then — somewhere in the midst of the second quarter — we got our motors running.”

White, a junior from Judson, said the team still feels positive vibes from the Houston game, even though it will go down as a loss in the record book.

And even though UTSA lost some close games earlier in the season with inconsistent play in the fourth quarter, she said she has a good feeling about the team overall.

“Our last game was Houston, and we lost in overtime, but the game showed a lot for our team,” White said. “We showed grit. We showed fight. We just simply didn’t quit. It was a good way to leave before (Christmas) break.

“Coming back, we’re just trying to get everybody back under their feet and and ready to go play.”

From this point forward, every team that UTSA plays will have Jenkins’ name circled on the scouting report.

At Houston, she struggled early with the physicality of the Cougars’ defense, but she kept battling and hit 12 of 17 shots from the field.

In one stretch, she wowed the crowd at the Fertitta Center with deft moves that you might see in a pro game.

Once, while set up at the elbow, she pivoted, spun through traffic and flipped up a shot left-handed into the net.

In another sequence, she came down on the fast break, sweeping past defenders and into the paint, to score again with the left hand.

She’s on a roll now, having scored 20 or more in five of her last six outings.

“She’s extremely skilled,” Aston said. “There’s no question. She works on her craft. I mean, she’s in the gym all the time (and) she wants to be great.

“The growth of our team is that we’re starting to figure out who can do what, and I think our team is comfortable knowing they need to get her the ball some.

“I’m not sure we knew that a month ago.

“For her, she’s making better decisions when she gets doubled. Right now, people are, I would say, picking poison against us.”

Aston said the team still needs other players to step up and contribute.

“We also need to see Elyssa Coleman get the ball a little more down low,” the coach said. “She was efficient when she got it (at Houston), and then, you know, we need to have (other) players make open (perimeter) shots.”