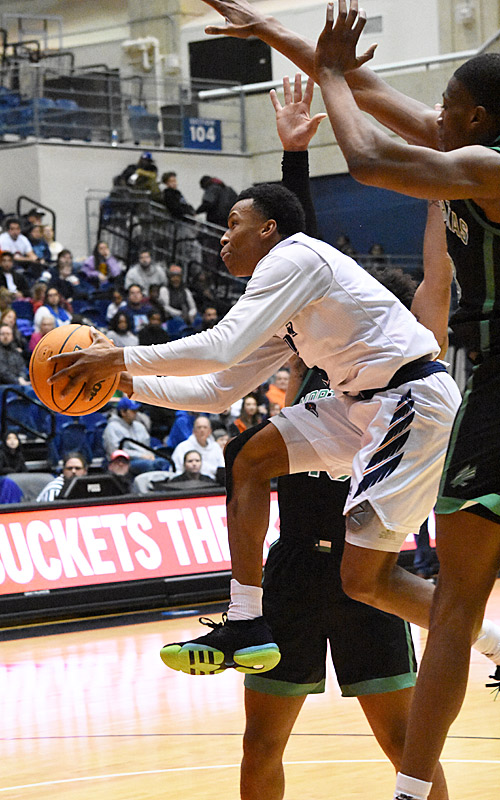 UTSA guard Japhet Medor returned to practice Wednesday after experience holiday travel delays in getting to San Antonio from his home in Florida. – File photo by Joe Alexander

Forging through a few uncertainties coming out of the Christmas break, the UTSA Roadrunners are scheduled to take a bus ride to Louisiana today on their first Conference USA trip of the season.

The Roadrunners (6-6, 0-1) are scheduled to play the Louisiana Tech Bulldogs (7-5, 0-1) on Thursday night in Ruston. Next up, UTSA will move on to Alabama to face the UAB Blazers on Saturday.

The most pressing issue for UTSA centers around starting point guard Japhet Medor. 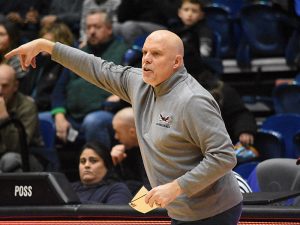 Like most players on the team, Medor went home for the holidays. He was in Florida visiting family as the Roadrunners took three days off following a Dec. 22 home loss to North Texas.

When UTSA returned to on campus workouts Monday, Medor was not there.

Like a lot of people traveling this week, he had been unable to get from Point A to Point B on his itinerary. The last time I checked with Roadrunners coach Steve Henson on Tuesday afternoon, Medor was expected to arrive in San Antonio some time Tuesday night.

The team’s leading scorer was due to work out with the team Wednesday morning before everyone boarded a bus bound for Ruston. In a late-breaking development, the Medor travel issue has been resolved.

Henson just texted to say that Medor had arrived in San Antonio on Tuesday night, as scheduled, and practiced with the team on Wednesday.

Another issue of note was the ongoing question surrounding the status of 7-foot center Carlton Linguard, Jr. UTSA, as expected, has forwarded its request to the NCAA to clear a path for the former Stevens High School standout to gain immediate eligibility.

A transfer from Kansas State, Linguard has been ineligible since he arrived this summer. Henson said Linguard fared well academically in the fall semester, and so UTSA has made the request.

“We’ve submitted the paperwork and hopefully will get an answer from the NCAA soon,” Henson said.

Another unrelated complication in Linguard’s efforts to play this season started to unfold when the team took a mid-December trip to play at New Mexico and Utah. He apparently suffered a concussion on the trip and is now in protocol.

Linguard’s absence from practice was a factor Tuesday afternoon.

“That affected our workout quite a bit,” Henson said. “Our guys hit the wall today. We were without Isaiah (Addo-Ankrah), Carlton and Japhet. So that gives us 12 bodies and two point guards (Erik Czumbel and Christian Tucker).

“So they had to go every single rep. Every single rep they were on the court … There wasn’t much down time for anybody. There was just one sub on each team.”

Linguard’s situation could be vital to the long-term success of the team this year. Since he started to practice full speed following a months-long knee rehabilitation, he showed quickness, jumping ability and multiple skills.

Henson said he doesn’t know how long it will take the NCAA to sort out Linguard’s academic issue.

“My belief is that they move a little faster (on requests) during the season,” the coach said. “The NCAA knows people are sitting around waiting on that. But I think there’s a lot of stuff going on with the (football) bowl games, waivers and appeals and those kind of things.

“I would hope (in Linguard’s case) relatively soon. It’s possible they look at it and want to know more information. More clarification. Our compliance office does a great job handling those situations. We kind of lean on them for it.”

Henson said Linguard “did a very good job in the classroom, an excellent job” in the fall semester. That was part of the process, to show that since he has been in school at UTSA, that he was making progress, the coach said.

“He’s a good student,” Henson said. “He’s got a good (grade point average). We just got to show that we’ve got everything lined up for him. That he’s in good standing. That he’s in good hands. That the move here has been positive for him.”

As for Addo-Ankrah, one of UTSA’s top three-point shooters, it was announced prior to UTSA’s Dec. 22 game against North Texas that he would be out a month with a fracture in his left wrist. It’s his non-shooting hand.

If everything works out on his recovery timeline, fans might expect to see the Houston native back on the floor some time around the first of February.

Henson, talking after Tuesday afternoon’s workout, smiled when it was suggested that a healthy Addo-Ankrah and an eligible and healthy Linguard were two of his recent requests to Santa Claus.

“Those would have been pretty high on the Christmas list, for sure,” the coach said.