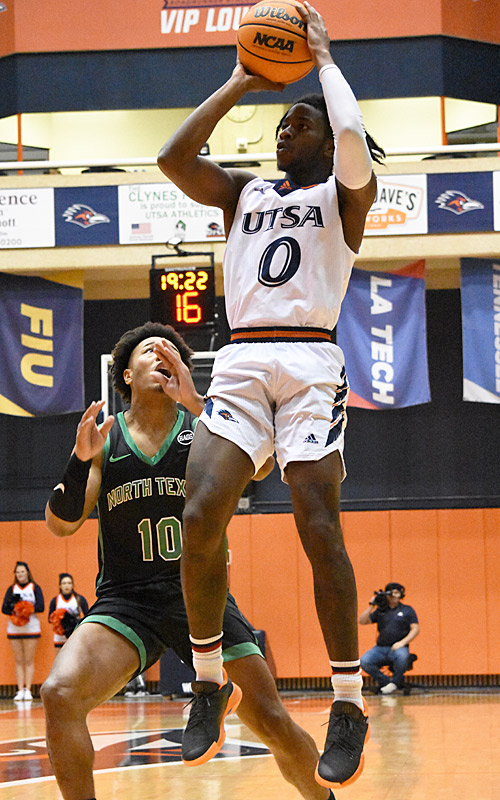 Guard John Buggs III led a second-half charge for the UTSA Roadrunners, but the North Texas Mean Green stopped the rally and puilled away for a lopsided victory in the Conference USA opener for both teams. – Photo by Joe Alexander

Mother Nature directed an Arctic blast of cold air at San Antonio on Thursday afternoon, just about the same time that the North Texas Mean Green and UTSA Roadrunners tipped off in a Conference USA opener at the Convocation Center. 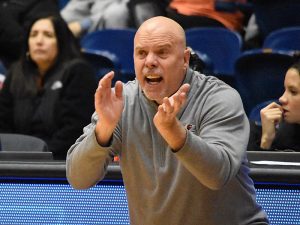 Steve Henson’s UTSA Roadrunners fell to 6-6 on the season and to 0-1 in Conference USA after losing 78-54 to North Texas Thursday night. – Photo by Joe Alexander

At the end of the night, North Texas forward Abou Ousmane emerged as a force of nature himself. He rained a career-high 37 points on the UTSA Roadrunners in leading the Mean Green to a 78-54 victory.

Ousmane hit 15 of 19 from the field and grabbed 11 rebounds as North Texas (10-2) won its fifth in a row on the season. In addition, the Mean Green added to their recent dominance of the Roadrunners, improving to 9-2 against UTSA over the past eight seasons.

Ousmane, a 6-foot-10 Brooklyn native, was the talk of post-game interviews. Coming in, he was averaging a little more than 11 points. His previous career high was 23.

“I was most impressed with his patience,” North Texas coach Grant McCasland said. “He was 15 of 19, and I thought he was composed. And then when he took his time and our team was patient on the offensive end, I thought we got the shots we wanted. That showed in 17 assists and nine turnovers.” 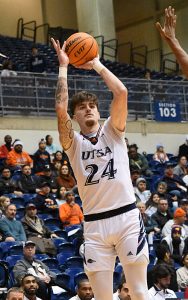 UTSA (6-6) didn’t shoot well in the first half but still managed to stay within reach of the visitors, trailing by 11 at halftime. Led by Japhet Medor an John Buggs III, the Roadrunners hit a few threes, attacked the basket and pulled to within one point twice early in the second half.

From there, the Roadrunners started to settle for jump shots, lost a little of their edge on each possession and watched as the Mean Green exploded for 17 unanswered points. A dunk by Ousmane capped the streak and made it an 18-point game, 60-42, with 6:55 remaining.

UTSA never got closer than 15 the rest of the way and lapsed again in the final minutes, as North Texas rolled up as much as a 27-point lead. It all left UTSA coach Steve Henson and his staff searching for answers.

Asked what he told his players in the locker room, he said, “I was pretty honest with ’em. It’s not acceptable. You know, it’s a home game. It’s a conference game. We were in pretty good shape there midway through the second half and ended up losing badly. You can’t feel good about that.

“If they feel good about that right now, then something’s not right. It’s just not good enough. You know, we gave up 50 percent (shooting) to them. We shoot 33 percent. Turned it over too much and got out-rebounded. 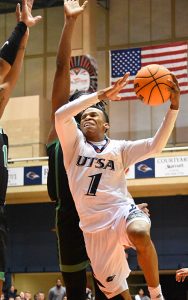 UTSA’s Japhet Medor battles to create space on a drive to the hoop. Medor finished with 12 points, four assists and three rebounds – Photo by Joe Alexander

“You know, there’s not many phases of the game left. Again, proud of certain stretches of the ball game. I still love this team. I love our guys. I like their attitudes, for the most part. But we’ve got to play harder.”

Injuries played a role in the lopsided margin. UTSA was playing its first game of the season without forward Isaiah Addo-Ankrah, one of the team’s best three-point shooters. Addo-Ankrah, who scored 14 in his last outing, was sidelined after being diagnosed earlier this week with a wrist fracture.

Additionally, UTSA center Jacob Germany also was less than full speed. Germany twisted an ankle badly in a home game on Sunday and wasn’t himself in a couple of days of practice coming into Thursday night.

Germany had a good first half in some respects, with eight points and seven rebounds. But matched against Ousmane, it appeared he had some trouble springing off the floor and with lateral movement.

Regardless, he played with significant heart and finished with 11 points and 12 boards. Medor led the Roadrunners with 12 points and John Buggs III had 10.

Foul trouble plagued UTSA freshman standout DJ Richards. Richards had three in the first half and picked up a fourth early in the second half. He finished with eight points on three of 11 shooting. Richards was two of eight from three.

In scoring 54 points, the Roadrunners fell 16 shy of their season average. They also shot 32.7 percent from the field, which was also down from their 41.2 percent reading through the first 11 games.

Former UTSA great Devin Brown was a face in the crowd at courtside. Brown, No. 3 on the school’s all-time scoring list with 1,922 points, led the Roadrunners to the 1999 NCAA tournament. He later played in the NBA and won a championship with the Spurs. Brown was recently named to the San Antonio Sports Hall of Fame.

Posting up to score

Freshman Massal Diouf works inside to score for the Roadrunners late in the first half. https://t.co/hyCDEtrt3Q pic.twitter.com/OWeabwaIFT

With North Texas forward Abou Ousmane scoring 2o first-half points and the Mean Green clamping down defensively, the Roadrunners found themselves down by 11 at intermission. North Texas held UTSA to 32 percent shooting and surged at the break to a 34-23 lead.

UTSA’s offense never got untracked in the half, shooting 9 of 28 from the field and 1 of 7 from three-point distance. Germany led the Roadrunners with eight points and seven rebounds at the break.