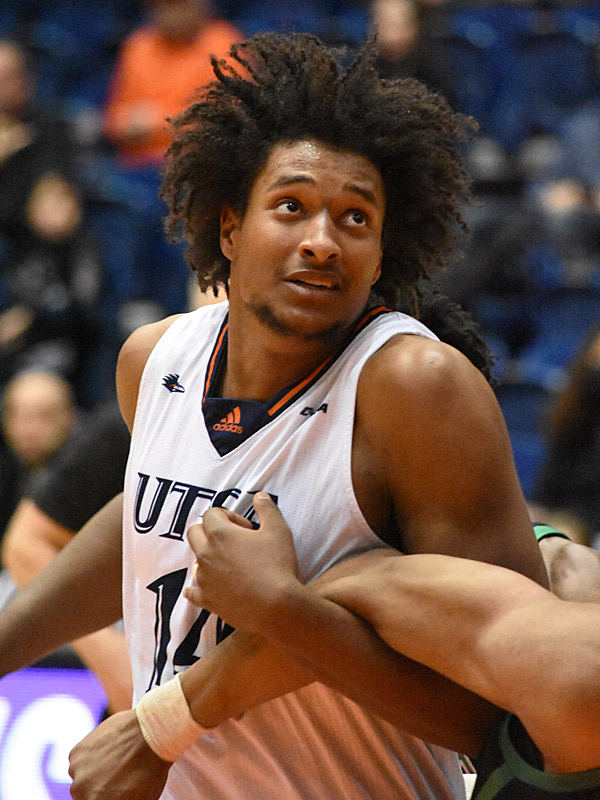 Freshman Massal Diouf is a UTSA biology major who expresses fascination about things such as the makeup of cells. He wants to attend medical school one day and says he’s aiming to become a cardio-thoracic surgeon. – Photo by Joe Alexander

As a former youth sports phenomenon from a small town in The Netherlands, affable UTSA freshman Massal Diouf left home four years ago to chase his basketball dreams.

From arenas in Europe, to the West Coast of the United States, and then on to Canada and South Texas, the 6-foot-9, 240-pounder has played the game he loves and has since taken on a new passion — the study of biology.

Now three months shy of his 20th birthday, Diouf’s days are spent either in the gym, trying to defend the pick and roll, or in the UTSA classroom, pondering the nature of cell structure.

The Roadrunners’ pre-med student in the pivot has been so busy in his first year of college, in fact, that he hasn’t really had time to consider whether he misses being home.

“Obviously I’ve been away for a long time, at this point,” Diouf said Wednesday afternoon. “I wouldn’t say that I miss home, where I’d want to be home.

“It’s not like I want to be home. It’s more so I’d like to have a little bit of home with me.”

By age 15, Diouf traveled from his hometown of Gouda, in South Holland province, to both Finland and Denmark as a member of The Netherlands’ under-16 national basketball team.

A year later, the former soccer, tennis and judo athlete left home and moved to California to finish high school.

After graduation from The Athenian School in Danville, in the San Francisco Bay Area, Diouf hit the road again.

In order to play a year of prep school and gain more experience on the basketball hardwood, he relocated to Canada, in Edmonton, in the western province of Alberta.

Now, Diouf has spent a little more than four months in San Antonio, charming those around him with a smile and old-school manners.

“He thanks the coaches after practice,” UTSA coach Steve Henson said. “Every day.”

Diouf is also blessed with a wry sense of humor.

Ask him how he has adjusted to his new surroundings in Texas, a home half-way around the world from where they sell Gouda cheese in Europe, and he just smiles.

“I was getting prepared for Texas (while living in Canada),” Diouf explained. “In Alberta, where my prep school was, that (is a place) described as the Texas of Canada.

“So, I got the soft-core version in Alberta — and then I was ready for real Texas.”

“A lot of truckers,” Diouf said. “I feel like the culture is very similar. A lot of pride in their own culture. That’s what I see a lot in Texas, too. Go big, or go home. That sort of stuff.”

Asked if he had been to a Buc-ee’s yet, he said he hasn’t but that “it’s still on the bucket list.”

“I’ve seen the logos,” Diouf said. “Unfortunately, haven’t stopped there yet. I was able to cross Cracker Barrel (off the list) on the last (road) trip. So I got that one out of the way.”

Over the past few days, UTSA has been preparing to host the Middle Tennessee State Blue Raiders.

The Roadrunners (6-8, 0-3 C-USA) will play the Blue Raiders (9-5, 2-1) tonight at 7 at the UTSA Convocation Center. Somewhat surprisingly, Diouf is expected to start his fifth straight game.

A player who wasn’t high on coaches’ list of candidates to be in the rotation when he arrived on campus in late August, Diouf has played double-figure minutes in four of his last six games.

If he keeps rebounding and playing defense at his current level, he could join the likes of Giovanni De Nicolao, Byron Frohnen, Jhivvan Jackson and Keaton Wallace as players who have started 10 or more games as freshmen under Henson.

How did this happen?

“He just kept working, doing things right every single day,” Henson said. “We had been cycling through that fifth starter every few ball games, anyway. A couple of different guys played the four (power forward) for us.

“Decided to take a look at him with his rebounding and his toughness, to slide him in at the five (at center) and move Jacob (Germany) to the four. It hasn’t translated (as we expected). We thought it might jump start Jacob offensively.

Even though the Roadrunners have struggled recently, losing both games on a C-USA road trip to Louisiana Tech and UAB last week to fall to 0-3, advance metrics have suggested to Henson that Diouf has earned the right to be on the floor.

“Massal, with his physicality and his defense, his plus-minus numbers are No. 1 on the entire team,” the coach said. “If you can go in and defend and rebound and don’t turn the ball over, you can impact the game.”

Diouf, asked if he is surprised that he is starting and playing for the Roadrunners in his first year out of the Western Canada Prep Academy, shrugged and offered a diplomatic response.

“For me, it’s pretty easy,” he said. “You just always got to want to play. You always got to be ready to play. But I also understood that I’m coming in as a freshman.

“So I didn’t have any qualms about waiting, sitting on the bench, supporting my teammates.

“I know that all these guys have a lot more experience. I mean, they’re way more experienced at the college level (than me). I’m just grateful to have an opportunity to play.”

In a recent interview with Andy Everett on the team’s radio broadcast, Diouf revealed his long-term goals — to go to medical school and then, hopefully, become a cardio-thoracic surgeon.

“I know that’s a long way away before I can get there,” he said. “But I’m just going to take it step by step.”

Diouf called his pre-med plans an “obsession” that he hopes to undertake after his career in basketball.

“I could not tell you where the obsession comes from,” he said. “There is no one in my family that does it. I do not have any direct relationships with doctors. I didn’t watch doctor shows growing up that made me fall in love with it. Honestly, it’s just really interesting to me.”

Being from Europe, Diouf brings an interesting perspective to the program. He grew up in a nation that did not have sports in high schools and didn’t have the facilities that American athletes enjoy.

He said athletes who wanted to play in The Netherlands joined clubs. His original club was called Bouncers Basketball.

“(Playing college sports in the United States) gets described as a full-time job a lot,” Diouf said, “But it really isn’t, because we’re all just doing what we love to do.

“I think that’s where our stamina and work ethic come from. When we’re playing basketball, practicing, it doesn’t feel like work, per se, it’s more so, ‘We get to practice. We get to practice at this level.’ ”

“At the end of the day, when I was growing up, Bouncers Basketball did not have a gym like (the Convocation Center) to play in. We had to rent gyms, and then we would all come in together and play in those gyms.

“But, to have a gym like this (at UTSA), that I can play in every day, that’s something that I could never have dreamed of.”