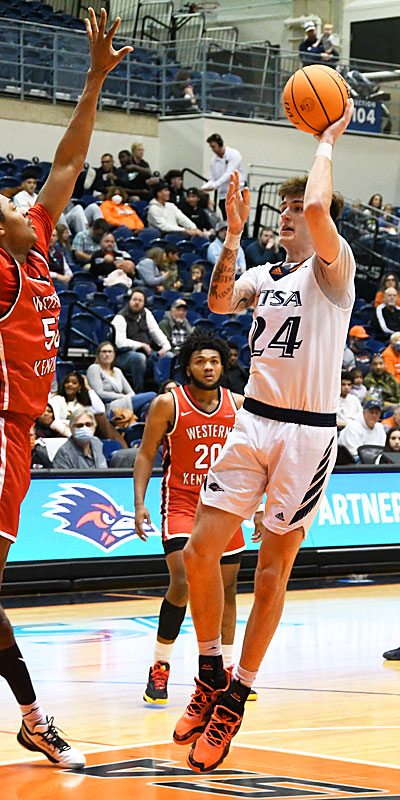 The UTSA Roadrunners entered a Saturday afternoon home game without the services of injured guard Jordan Ivy-Curry, their leading scorer.

Not a great sign for the team with the worst record in Conference USA. 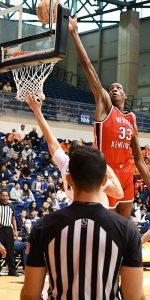 Western Kentucky’s Jamarion Sharp, a 7-5 center, rises up to block a shot against UTSA. – Photo by Joe Alexander

But instead of allowing the Western Kentucky Hilltoppers to run away with an easy one, 6-foot-11 center Jacob Germany and friends played hard and stayed in contention to win until the end.

Getting big performances from guards Josh Anderson and Jairus Hamilton, who each scored 18 points, Western Kentucky fended off rallies by the Roadrunners in each half en route to a 71-65 victory at the UTSA Convocation Center.

Hilltoppers point guard Dayvion McKnight also made a big play down the stretch as the visitors escaped with their fourth straight win and their second in three days.

On the flip side, an inspired performance by Germany went for naught, with the Roadrunners losing their fifth game in a row.

Germany scored 26 points and pulled down 11 rebounds against the Hilltoppers and their 7-foot-5 center, Jamarion Sharp.

It was one of the best performances by a center this season against Sharp, the nation’s leading shot blocker.

Unofficially, seven of Germany’s 11 baskets came on jumpers or hooks hoisted from outside the paint.

“Let me tell you,” Western Kentucky coach Rick Stansbury said, “as you well know, I got a pretty good defender in there. I’ve never had a player go over him this year.

“We had one go through him, physically, but Germany’s the first guy that’s gone over the top of him. All year long. He was really good.” 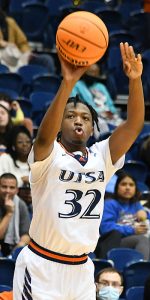 Sophomore Isaiah Addo-Ankrah started for the first time but struggled with his shot, hitting 2 of 9 from the field and scoring five points. – Photo by Joe Alexander

“You go on the road, it’s never easy,” Stansbury said. “We knew this was a much better team than their record. They’ve been in every game like this, and they just haven’t pulled out some games.

“I thought they had a little extra emotion playing without their point guard, but we felt like the other guys made their team better, and they did.”

Germany said it’s always been a challenge for him to play against Western Kentucky. Last year, he faced Charles Bassey, now with the NBA’s Philadelphia 76ers.

This year, it was Sharp, who is less of an offensive threat than his predecessor but quite the presence as a defender.

“I think Western Kentucky does a really good job developing bigs into really elite big men,” Germany said. “That’s why Bassey’s in the league right now. You know, (Sharp) will probably be in the league in a few years.”

Germany made a statement with his individual performance, but he said he doesn’t know if he necessarily proved a point.

“I just went out there and competed,” said Germany, who hit 11 of 19 from the field. “They were giving me the looks that I wanted.”

As for the team, Germany said he thinks the Roadrunners are close to turning the corner on a difficult season.

Dragged down by Covid-19 issues and sundry other issues that have made game-to-game consistency nearly impossible, UTSA is 2-14 since mid-December. The Roadrunners’ 12 C-USA losses are the most in any of six seasons with Coach Steve Henson at the helm. 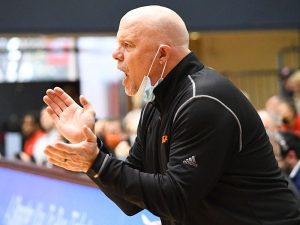 UTSA coach Steve Henson says his players have maintained a positive attitude during a two-month streak of misfortune. – Photo by Joe Alexander

Four of the losses have been by six points or less. Previously, the Roadrunners’ worst showing in the C-USA under Henson came in 2019-20, when they went 7-11. The year before Henson took over, UTSA finished 5-27 and 3-15.

It’s uncertain when Ivy-Curry, who leads the Roadrunners in scoring at 15.4 points per game, could make his return. Henson says his explosive wing player is making progress, but the coach says he isn’t close to being able to practice. The 6-foot-2 sophomore sprained his ankle at the end of a game Monday night at Middle Tennessee State.

“There were a lot of positives, but with the game on the line, we just didn’t make the play that we needed to make,” Henson said.

Henson said the Roadrunners definitely missed Ivy-Curry, who has had to sit out seven games this season, including six in Covid-19 protocols. 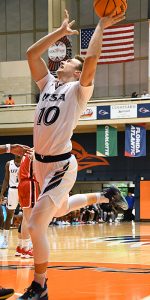 “For sure, he does so much for us,” Henson said. “He’s our leading scorer and one of our better three-point shooters … We missed him. (But) I’m proud of the other guys that did step up.”

“Darius (McNeill), in the first half, got in the middle of the zone and made some nice plays,” Henson said. “(Lachlan Bofinger’s) energy was great.”

Western Kentucky — Anderson came off the bench for 18 points, including 12 in the first half. He also had six rebounds and two steals. Hamilton scored 13 of his 18 points in the second half. He also pulled down seven rebounds. McKnight posted up McNeill with 1:33 remaining and hit a shot that put the Hilltoppers in front, 68-63.

UTSA — Czumbel contributed 14 points and four assists. He hit a season-high four three-point shots. McNeill finished with six points, six assists and four rebounds. Starting for Ivy-Curry, Isaiah Addo-Ankrah scored five points. Meanwhile, Dhieu Deing was held to three. Together, Addo-Ankrah and Deing were a combined 2 of 13 from the the three-point line.

A moment to remember from the first half

One defensive gem deserves another

Whoa. UTSA's Dhieu Deing strips a Western Kentucky player on the drive and takes it the other way. Deing's layup was blocked by Western Kentucky's Jamarion Sharp. https://t.co/hyCDEtJ4sq pic.twitter.com/8ruTwKfa80

Shooting it from downtown

Jairus Hamilton buries a three out of the corner for Western Kentucky. https://t.co/hyCDEtJ4sq pic.twitter.com/BUHcrA0PLA