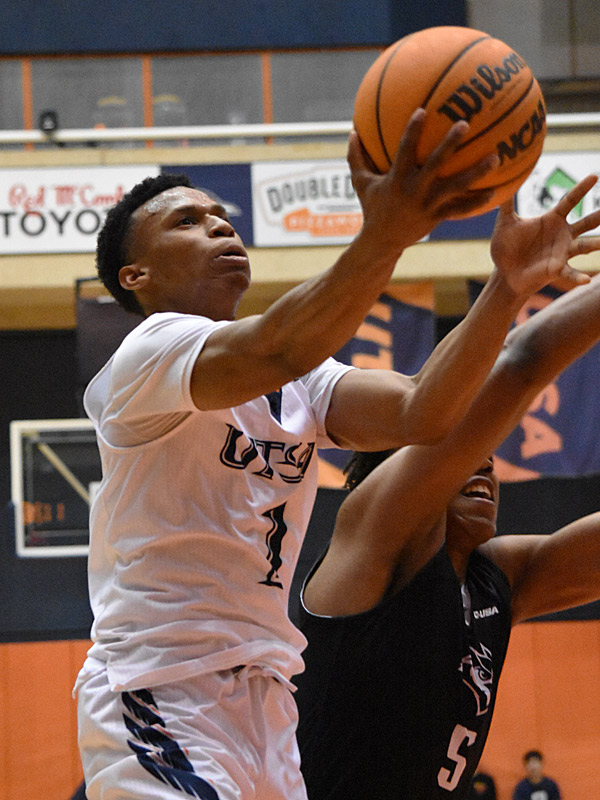 Point guard Japhet Medor led the UTSA Roadrunners with a season-high 30 points on 11 of 21 shooting from the field. – Photo by Joe Alexander

Guard Quincy Olivari tied his season high with 30 points and center Max Fiedler had a triple-double Monday night as the Rice Owls erased an 18-point deficit to down the UTSA Roadrunners, 88-81, in overtime.

Playing with poise on UTSA’s home court, the Owls also received a boost from guard Travis Evee in the extra period. The 6-foot-1 playmaker buried a three on the end of a long possession with 1:56 remaining to help the visitors pull away. 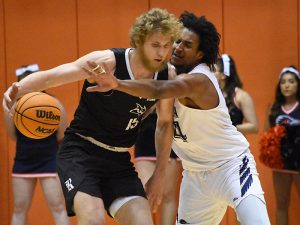 Massal Diouf (at right) had his hands full all night as he tried to check Rice center Max Fiedler, who finished with a 24-point triple double. – Photo by Joe Alexander

Evee finished with 19 points for the Owls, who improved to 13-5 on the season and 4-3 in Conference USA.

Japhet Medor scored 30 points to lead the Roadrunners. UTSA fell to 7-12 overall and 1-7 in the C-USA despite playing well for most of regulation. The Roadrunners played for the second straight game without injured center Jacob Germany, who is out with a concussion.

Rice coach Scott Pera said “it came down to defense” in climbing out of double-digit deficits that spanned much of both halves.

“I thought (assistant coaches) Van (Green) and Greg (Howell) did a great job making a huge adjustment for the second half,” Pera said in a video posted to Rice’s Twitter page. “We got just enough stops. I thought we could get good shots offensively.

“Obviously, we weren’t making ’em in the first half. Even in the second half, we just struggled. We struggled with things we are normally good at. But our kids are old enough now to stay with it. They also listened to the game plan down the stretch, and that was to own three feet and in.

“Keep getting that ball three feet and in. Get to that foul line, because they were in the double bonus. You know, Mekhi (Mason) hit a huge three when Quincy drove. Travis hit a huge three. And then Cam (Sheffield) made an unbelievable play to get us the ball late. And Travis hit a big shot — again (in the overtime).

“Just a great team win, and I thought our three older guys (Olivari, Fiedler and Evee) certainly carried us.”

For UTSA, the loss stung badly. It was the team’s fourth straight setback. It was also a lost chance for the Roadrunners to prove that they could beat one of the better teams in the C-USA.

In addition, they needed the momentum with two home games remaining this week, including a Thursday night test against the conference-leading FAU Owls.

They needed the win, but they couldn’t get it, despite holding an 18-point lead with four minutes left in the first half and a 13-point spread at intermission. When Christian Tucker hit a jumper with 7:06 left in the game, the Roadrunners hiked the advantage to 16.

At that juncture, things started to unravel for the home team. 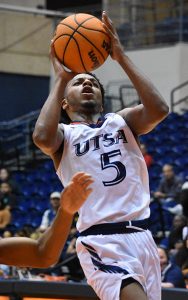 The Owls, one of the better offensive squads in the nation, started to roll. Olivari hit a jumper with 6:47 remaining to start a 21-5 run by Rice to the end of regulation.

A couple of misses on the front end of one-and-one free-throw situations and a turnover against the Sheffield-led backcourt pressure in the final minute cost UTSA dearly.

In addition, Medor had a chance to win it for the Roadrunners with 1.1 seconds left, but he couldn’t get it done. With UTSA trailing by one, he went to the free throw line and missed the first attempt, and then he tied it 72-72 by knocking down the second.

Once the game reached overtime, the Owls took control. They played better defense and outscored the Roadrunners 16-9. With UTSA failing to generate offense on its own end, Olivari knocked down six free throws in the final 1:24 to seal it.

Asked about the mood in the locker room afterward, UTSA coach Steve Henson said it “was what it should be.”

“Our guys were devastated,” the coach said. “This one hurts bad. I wouldn’t expect any other response.”

Jacob Germany suffered the concussion sometime during the UTEP game last Wednesday in El Paso, Henson said. As a result, he sat out last Saturday at Charlotte and again Monday night against Rice.

Henson said he doesn’t expect Germany to to play on Thursday against the FAU Owls. He said “there’s a chance” that the 6-foot-11 senior will be ready by Saturday.

The timeline for the return of forward Isaiah Addo-Ankrah is also murky. Addo-Ankrah has missed all eight conference games with a fracture in his left wrist. Henson said he could begin shooting some at the end of this week and could have the cast removed next week.

UTSA point guard Japhet Medor
sinks a jumper to cap a long possession. Medor has 17 in the half. https://t.co/hyCDEtJ4sq pic.twitter.com/50vtzfeX92

Rice — Guard Quincy Olivari scored 30 and pulled down eight rebounds. He also had 30 points on Dec. 17 at home against Northwestern State and on Dec. 4 on the road at Texas State. Olivari hit nine of 18 from the field and five of 12 on three-pointers. Max Fiedler had 24 points, 13 rebounds and 11 assists. Five of his rebounds were on the offensive end. Travis Evee had 19 points and five assists. 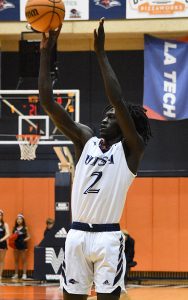 With Jacob Germany not playing, Aleu Aleu started at forward and contributed nine points and eight rebounds in 40 minutes. – Photo by Joe Alexander

UTSA — Japhet Medor scored 30 points, including 19 points on seven of 11 shooting from the floor in the first half. In the second half, he cooled off to three for eight, and then one for two in the overtime. On free throws, Medor was six for eight for the game, but he missed a couple in the final minute. DJ Richards scored 14 and John Buggs III 13. Aleu Aleu started and produced nine points, eight rebounds and two assists in 40 minutes.

Playing without their starting center for the second straight game, the Roadrunners kicked up the tempo and raced to a 45-32 halftime lead on the Owls.

UTSA hit eight three-point shots en route to one of their best offensive halves in weeks. Buggs and Richards buried three triples each, and Medor had two. Medor led the way with 19 points and three assists.

The Roadrunners played with pace from the outset. Even though the Owls rank as one of the top-scoring teams in NCAA Division I, the Roadrunners didn’t back down from the challenge. With 4:07 remaining, they had built their biggest lead at 18 points.

UTSA played without injured senior center Jacob Germany for the second game in a row.

UTSA’s DJ Richards takes off on the fast break and scores with the left hand. https://t.co/hyCDEtJ4sq pic.twitter.com/FIkuIhNg76