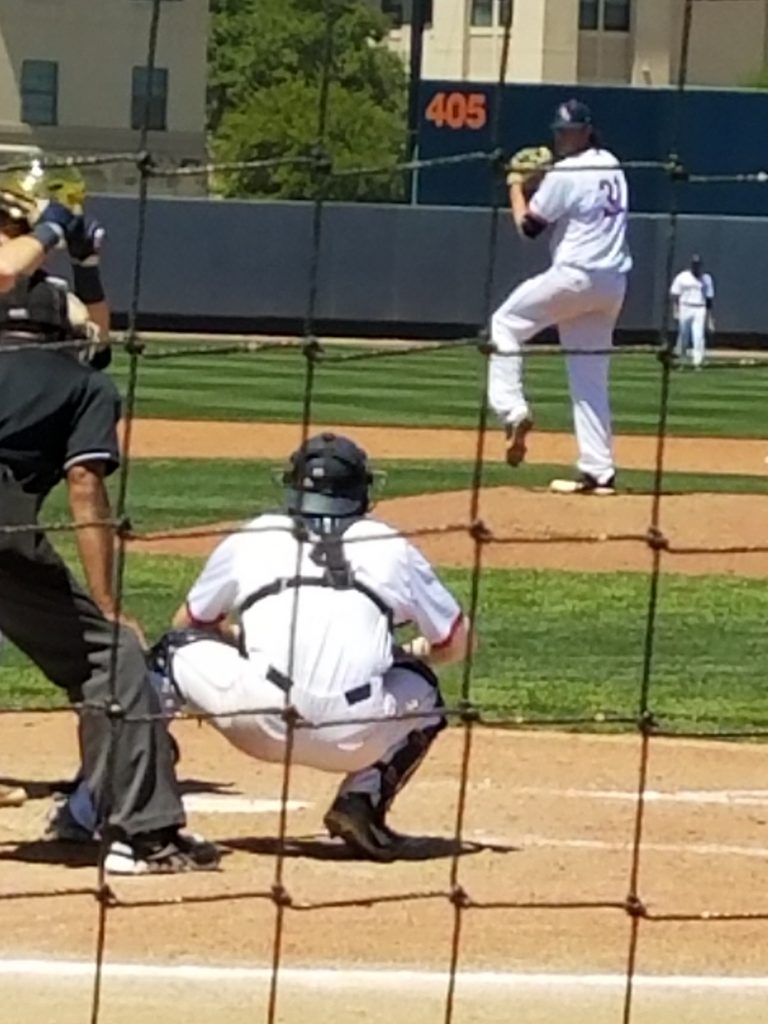 Relief ace Derek Craft struck out five in two and a third innings to earn the victory for the Roadrunners. (Photo by Jerry Briggs)

Just call them drama kings for a day.

Leading by three runs on Sunday afternoon, the UTSA Roadrunners allowed the FIU Golden Panthers to score once in the seventh and twice in the eighth to tie the score.

And then, just as it seemed that the Panthers might steal another Conference USA baseball victory in San Antonio, relief pitching ace Derek Craft put a stop it.

Craft struck out five in two-plus innings of scoreless relief, setting the stage for a two-out, 10th-inning rally and a 5-4 win for the Roadrunners.

After Dylan Rock’s single scored Ben Brookover from third, UTSA had emerged with two victories in the three-game series and renewed hope for a strong finish to the season.

UTSA players stormed the field after Rock’s RBI single to left, celebrating a win that boosted the Roadrunners (21-17 overall, 9-8 in conference) into fourth place in the C-USA standings.

“The later we get in the season, any victories are good victories, especially as you inch your way toward the conference tournament,” UTSA coach Jason Marshall said. “But the margins in our league are so slim. From top to bottom, pretty much anybody can beat anybody on a given day.

“Just proud of our resiliency to, one, give up the lead but, two, just hang tough and continue to get outs. Derek Craft just kind of hung in there, threw some zeroes up and gave us a chance to get to that moment.

“And then just proud of Dylan Rock, a freshman, for stepping in there and getting the big hit.” 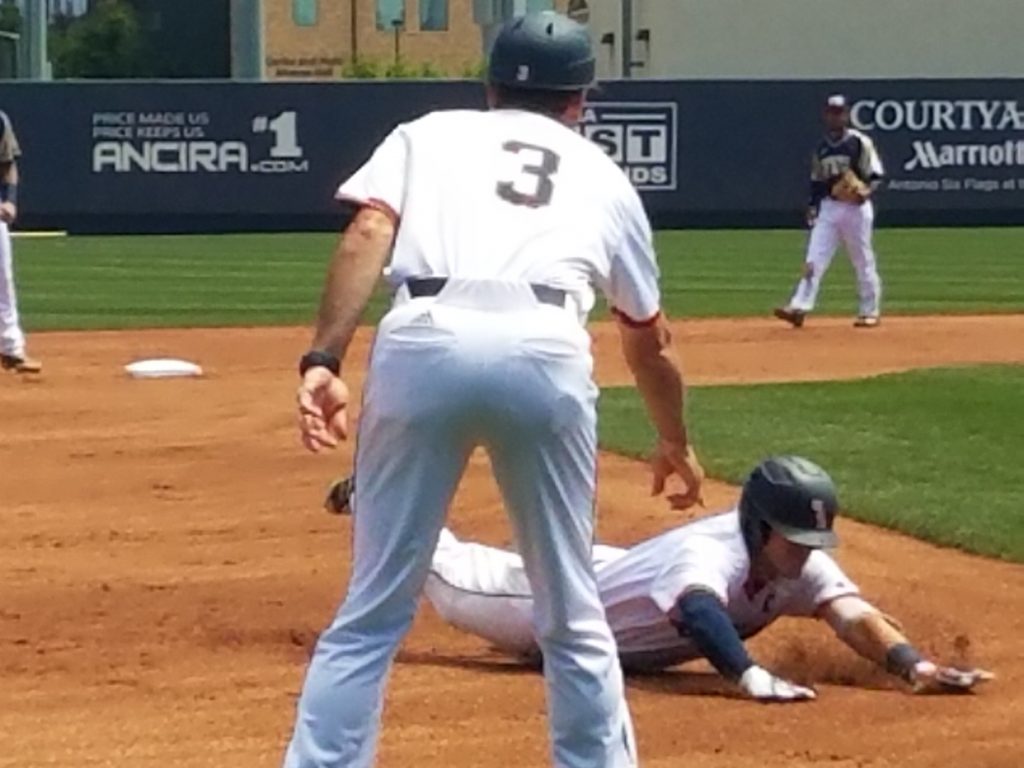 UTSA’s Ben Brookover executes a head-first slide into third base with a second-inning triple. (Photo by Jerry Briggs)

With two out in the bottom of the 10th and nobody on, Brookover stepped to the plate for the Roadrunners.

Marshall, in the third-base coach’s box, shouted some encouragement at the senior from Reagan: “Get us a double, Ben.”

Brookover promptly obliged by powering a 2-1 fast ball from Tyler Myrick to the base of the fence in center field.

As he pulled into second standing up, UTSA was in business.

With the game on the line and Rock at the plate, a wild pitch from Myrick skipped to the back-stop, allowing Brookover to take third.

At that point, Rock slapped a 2-2 fastball into left field with some top-spin, bringing Brookover home for the winner.

“Coming into today, we knew it was kind of a must win,” said Brookover, who had two doubles and a triple. “We knew that if we won, we’d be in or around fourth place, and if we lost we’d be in (or) around eighth place, so a lot of guys had the mentality that this was a must win.

“It got a little sketchy at the end, but we definitely took care of business.” 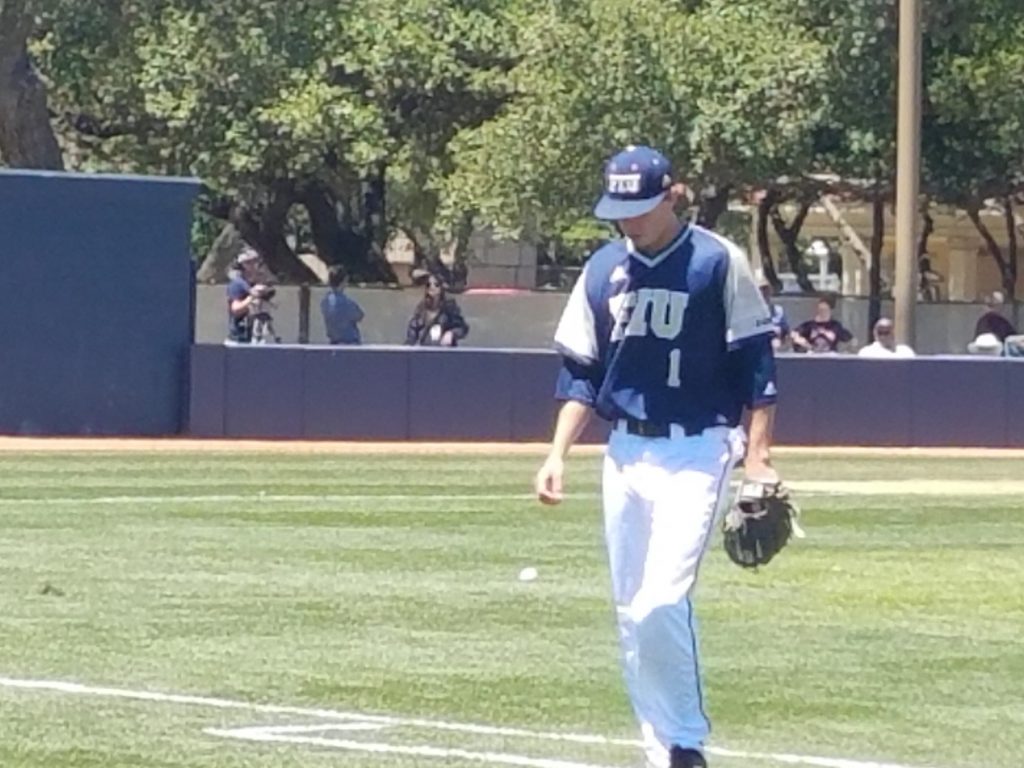 FIU starter Nick MacDonald pitched well, striking out six in 5 and 1/3 innings. But he tired at the end, giving up three runs in the sixth and leaving the game with UTSA leading 4-1. (Photo by Jerry Briggs)

UTSA-FIU series at a glance

With a revised schedule, the Roadrunners and Panthers played two nine-inning games on Friday, with UTSA winning the opener 12-4 and then dropping the nightcap, 2-1.

Brookover homered in the first game and drove in four. For the series, he produced four hits, scored five runs and had five RBIs.

Craft, a pro prospect, pitched in all three games.

In Game 2, he took the loss after giving up a game-winning homer to Logan Allen in the eighth. But by Sunday, he earned redemption and a victory that improved his record to 3-3.

The 6-foot-8 right-hander, with a fastball clocked at 96 mph on the radar gun, worked a combined five innings in the three games and allowed one run on five hits. He struck out seven and walked two.

UTSA hosts intra-city Division I foe Incarnate Word in a non-conference game on Tuesday night. The Roadrunners return to C-USA competition on Friday with the first of three games at Middle Tennessee. 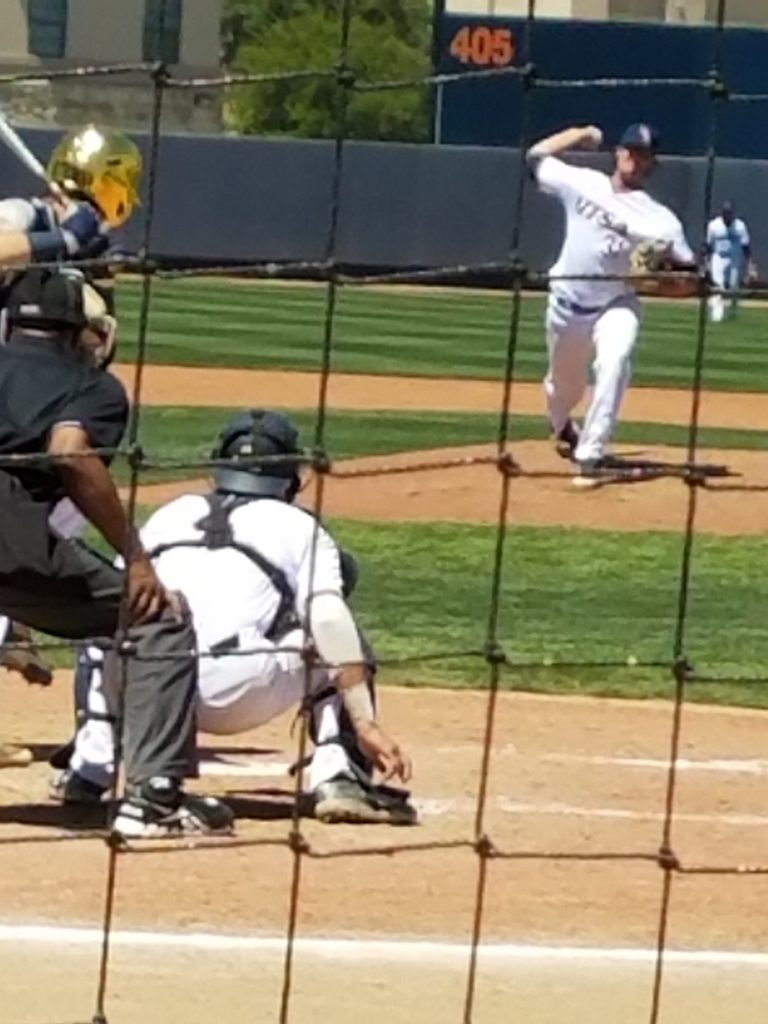 UTSA’s Derek Craft fires a pitch in the eighth inning against the FIU Golden Panthers. (Photo by Jerry Briggs)

UTSA players applaud teammate Ben Brookover as he rounds the bases following a three-run homer in the opener of a doubleheader Friday against FIU.

FIU freshman Logan Allen got a second chance to beat the UTSA Roadrunners on Friday night, and he didn’t waste it.

Coming off the bench as a pinch-hitter, Allen belted a solo homer in the eighth inning to boost the Golden Panthers to a 2-1 victory and a split of a Conference USA baseball doubleheader at Roadrunner Field.

UTSA won the first game, 12-4, saddling Allen with the loss as the starting pitcher.

Brookover delivered in the fifth inning as UTSA rallied from a two-run deficit and into a 4-3 lead.

Batting from the left side, Stacy sliced a twisting shot over the left-field wall to highlight a six-run eighth, turning the game into a run-away.

“Just glad we were able to extend the lead in the first game,” UTSA coach Jason Marshall said. “To get a little bit of a cushion there, late in the game, and to win the first game in a series is always key and important, especially to defend your home turf on a Friday.”

Junior Kyrell Miller (3-1) was the winning pitcher in 3 and 2/3 innings of relief. He yielded one run on three hits.

Miller struck out seven and walked one.

“Knowing how (starter Steven) Dressler has thrown all year and to see him come out of the game early, and for us to just hold serve … Kyrell Miller threw really well,” Marshall said. “(He) struck a couple of guys out to end an inning and then struck three guys out the following inning.”

Allen (4-5) started for the Panthers and was pitching well until he ran into trouble in the fifth.

He grooved a pitch to Brookover, who jerked it on a line over the left field wall and into the net for a lead that UTSA would not relinquish.

FIU’s Lorenzo Hampton delivers an RBI triple to right field Friday in the opener of a doubleheader at UTSA.

FIU jumped out to a 3-1 lead in its first four at bats.

The Panthers opened the scoring in the first inning with an RBI triple by Lorenzo Hampton.

They added another run in the second on a solo homer by Adan Fernandez.

In evaluating what went wrong in the second game of the double-header, Marshall started his analysis with FIU starting pitcher Andres Nunez (see video above).

The 6-foot-4, 240-pound, right-hander pitched seven innings, limiting UTSA to one run on five hits. He struck out nine.

“You know, I got nightmares of Nunez,” Marshall said. “In 2015, he pitched an absolute fantastic game against us in the conference tournament.

“He’s had some hardships and some injuries, and now he’s back, and once again beats the Roadrunners.”

Allen also did his part.

After UTSA scratched out a run against Nunez to tie the game in the seventh, FIU coaches elected to pinch hit Allen for Juan Teixeira to lead off the eighth.

He delivered with a solo homer over the left field wall against UTSA reliever Derek Craft.

“He got into one, and on a night like tonight when the wind’s blowing out to left, it doesn’t take a lot,” Marshall said.

It was Allen’s first homer of the season in 82 at bats.

UTSA freshman Jonathan Tapia turns on the jets to beat a throw to first base after an FIU infield bobble in the seventh. The error allowed Chris Estrada to score from third, tying the game, 1-1.

Officials on Thursday agreed to play two games Friday, take Saturday off because of forecasts for inclement weather, and then play the finale on Sunday.