Guard Giovanni De Nicolao hit a driving layup with one second remaining Thursday as UTSA held off the Louisiana Tech Bulldogs, 78-76, in a Conference USA thriller at Ruston. 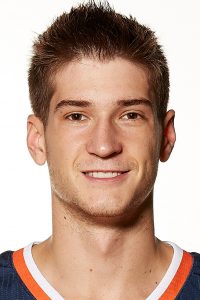 Electing not to call time out, the Roadrunners rushed it up the floor, looking for Keaton Wallace.

With Wallace covered on the wing, De Nicolao drove and double-clutched a shot that fell through to give UTSA the lead.

Inbounding from under UTSA’s basket, Louisiana Tech threw it down court and misfired on a desperation play that left the Roadrunners (9-7, 2-1) with the victory.

Undeterred, the Roadrunners roared from behind with a 25-10 streak highlighted by nine points from Jhivvan Jackson, who led the team with 21 on the night.

At that point, Louisiana Tech mounted its own rally. Boykins hitting a three-point shot with 25 seconds left and then tied the game at 76-76 on three free throws.

In UTSA’s last game, a 72-71 loss at home to North Texas on Saturday, De Nicolao had a chance to win it and missed a driving layup attempt in the final seconds.

He gained a measure of redemption with a couple of clutch plays against Louisiana Tech.

With 2:56 remaining, the 6-3 sophomore from Italy drained a three-pointer to give his team a five-point lead.

At the end, with the game tied, he connected again on a freelance play for the winner.

“We were supposed to run a play for Kea (Keaton Wallace),” De Nicolao told the team’s radio broadcast. “That was denied, so I just went one on one.

“I bounced off my man and I shoot … I knew it was going in because I can’t miss twice in a row (on a) buzzer beater.”

The Roadrunners likely gained some confidence with their first road win of the season in conference, in a traditionally tough place to play, and doing it by rallying from nine-point deficits in both the first and second halves.

“We can make runs in one minute,” De Nicolao said. “We can score 10 points in a row. But I think the main focus, why we came back, was because of our defense.

“If we get stops on ‘D’ we can run and we can score from three.”

“He’s never been afraid of the moment, from the time he stepped on campus,” UTSA coach Steve Henson said. “In an exhibition game last year, he hit a game winner. He steps up and makes a lot of big plays in games. We have a lot of confidence in him.”

Southern Miss at a glance

With the victory, Southern Miss improved to 8-8 overall and 1-2 in Conference USA.

UTSA became the first Conference USA team to win back-to-back games at LA Tech’s Thomas Assembly Center. UTSA is also only the second program to win in the facility since LA Tech joined the C-USA in 2013-14.