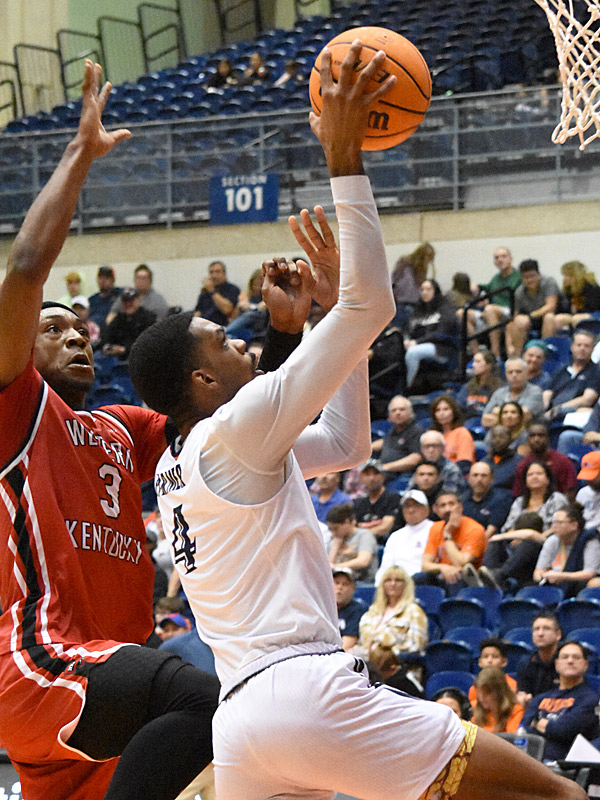 The UTSA Roadrunners executed a spirited rally in the second half, chopping into most of what had been a 19-point deficit, but clearly that wasn’t good enough for them against the towering presence of Jamarion Sharp and the Western Kentucky Hilltoppers. 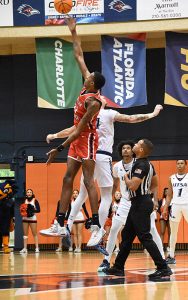 At the end, Sharp picked up his fifth foul and then drew a technical on his way off the floor at the UTSA Convocation Center, setting up four straight free throws for the home team.

The Roadrunners made all of them, pulling to within six with two minutes remaining.

Without their big man on the court, the Hilltoppers didn’t waver. They steadied themselves, went to work on the offensive end and made the key play in front of an announced crowd of 922 fans.

Guard Dayvion McKnight backed a defender down inside and kicked it out to Emmanuel Akot, who hit a three. Trailing by nine points as a result, the Roadrunners would not get closer than seven the rest of the way.

UTSA coach Steve Henson agreed that his team’s first-half performance, a 20-minute slog in which the Roadrunners shot 25 percent from the field and fell behind 38-20, was just to much to overcome.

“First half was disappointing,” Henson said. “Thought we’d come out better. Just couldn’t get anything going.” 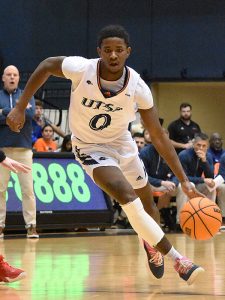 John Buggs III led the UTSA Roadrunners with 15 points. The redshirt sophomore from Louisiana hit three 3-point shots, all in the second half. – Photo by Joe Alexander

Henson said he felt like the Roadrunners needed “some juice, some energy.” But part of the problem stemmed from the play of Sharp, who effectively turned off the power in the building with his defense.

In the half, he blocked four shots, altered a few others and made a steal. UTSA, in turn, didn’t take care of the ball, coughing up 12 turnovers that led to 20 of WKU’s 38 points.

The Roadrunners played better in the second half. John Buggs scored 13 of his 15 points down the stretch. Josh Farmer also got going, scoring eight of his 13 off the bench.

Indeed, it may have been best stretch of the season for the 6-foot-9 sophomore from Houston, as he dunked once on the fast break and then took it inside with confidence against Sharp.

But, in the end, it was too deep of a hole to dig out of. The Hilltoppers, playing under assistant coach Phil Cunningham for the fourth straight game, came into the Roadrunners’ building and seized a game they had to have. 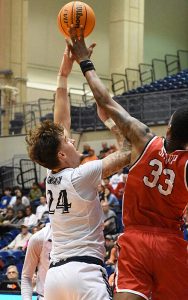 Within the five-game skid, three of the losses came in C-USA play and all three came by five points or less. Sharp said his teammates were just tired of losing the close games.

“Honestly, after those three close games, we were like, ‘We’re not being short no more,’ ” Sharp said. “We’re coming in for the win, because we’re going to play as hard as we can and give it all we can.”

Sharp also said the players wanted to win for head coach Rick Stansbury, who has been out with what school officials are calling a “health matter.”

“We’re doing it for our coach,” he said. “He’s out sick now. So, it’s like, everything we do is for him. We think about him constantly.

“But it’s like, at the same time, he taught us that when one player gets hurt, another’s got to step up. If he’s out sick, we all got to step up and take charge.” 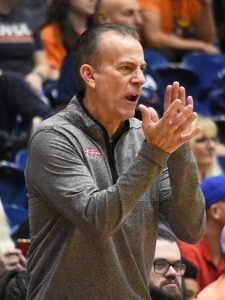 Western Kentucky assistant Phil Cunningham served as interim coach for Rick Stansbury, who was home resting after a ‘health matter’ sidelined him just before the new year. Stansbury has been out for four games. – Photo by Joe Alexander

For the Roadrunners, they’ll need to take the positives from a weekend split at home and keep working. They beat a good Middle Tennessee State team, 75-72, on Thursday night and played well in the second half against Western Kentucky.

Lachlan Bofinger came off the bench and provided some energy during UTSA’s rally. Farmer, at times, was electric.

In one sequence, he capped a long possession by catching a kickout pass from Bofinger before draining a three. Thirty five seconds later, on the next possession, he followed with a driving layup.

“Love the effort, energy and passion that Josh is playing with,” Henson said. “He’s bringing that every game. We always try to direct his energy and his talk the right way, but, yeah, that’s something we need. With his length and quickness, he gives us a boost.” 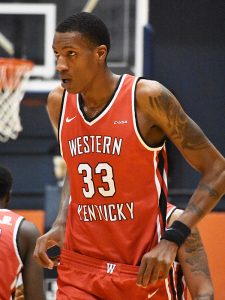 NCAA Division I shot-blocking leader Jamarion Sharp totaled six blocks to give him 67 in 15 games. – Photo by Joe Alexander

WKU’s Jamarion Sharp served notice on UTSA’s first offensive possession that he meant business. He blocked a shot by Roadrunners center Jacob Germany, spiking the ball to the floor with authority. Sharp finished the half with eight points, six rebounds, four blocks and a steal. As a result, the Hilltoppers dominated the scoreboard, as well, building a 38-20 lead.

UTSA coach Steve Henson is not happy after freshman DJ Richards is called for this offensive foul. https://t.co/hyCDEtJChY pic.twitter.com/tbNVYFRRA2

UTSA forward Lachlan Bofinger hustles for an offensive rebound and passes out to John Buggs, who nails a three. https://t.co/hyCDEtJChY pic.twitter.com/kVIiJiZudE

UTSA forward Josh Farmer steps out to hit a three in the first half against Western Kentucky. https://t.co/hyCDEtJChY pic.twitter.com/r2DCzn1gIR

UTSA coach Steve Henson issued a warning to fans who may have noticed that the Western Kentucky Hilltoppers lost five in a row in January.

Henson said the Hilltoppers have returned to their winning ways.

“They’ve been terrific (in) their last three,” he said.

Coming off three straight victories, including two on the road last week, the Hilltoppers will tip off against the Roadrunners today at 3 p.m. at the UTSA Convocation Center.

UTSA is expected to be without guard Jordan Ivy-Curry, its leading scorer who has an ankle injury and has not practiced this week.

Western Kentucky, anchored by 7-foot-5 center Jamarion Sharp, won on the road at Charlotte and Old Dominion last week and then knocked off the FAU Owls 76-69 Thursday night at home in Bowling Green.

“Their first five minutes of offense against Charlotte was as good as I’ve ever seen ’em, and this is our sixth year here,” Henson said. “I’ve never seen ’em have a stretch where they looked as precise as those possessions early.”

Henson said the Hilltoppers are mixing defensive schemes and playing with a shortened rotation.

“The ones playing all know their roles really well,” he said. “They’re hot, and they’re playing great basketball right now.”

Western Kentucky’s success on defense, and lately its offense, to a lesser degree, revolves around Sharp.

Sharp is 7-5 and 235 pounds and leads the nation in blocked shots, averaging 4.5 a game. He also averages 8.4 points and 6.7 rebounds. Sharp doesn’t shoot the ball much, but when he does, he makes most of them.

In fact, the native of Hopkinsville, Ky., shoots 73.4 percent from the field. He is 13 for 13 from the field in his last three games, including 7 for 7 in the victory over FAU two nights ago.

“He’s terrific,” Henson said. “He impacts the game on both ends of the floor. Just such a threat with his rolling at the rim. (They) throw it anywhere near the basket and he can go get it. He’s shooting 80 percent from the field because they’re all dunks.

“He moves pretty well, defensively, blocking a ton of shots. It’s not surprising with that length. But he’s not just standing and waiting … He moves around, gets after ball screens. He’s a good player.”