We are devastated to learn about the passing of @UTRGVMBB Coach Lew Hill. We offer our deepest condolences to Renee and Coach Hill’s entire family during this unimaginable time #UTRGV #WAChoops https://t.co/j80UGbzUaz

Steve Henson’s emotions ranged from elation to devastation — all within 24 hours. On Saturday, the UTSA coach felt a surge of energy when his team romped to a 90-47 victory to complete a two-game road sweep at Florida International.

But by Sunday evening, after the team had returned from its triumphant trip to Miami, he felt only sadness after learning that a long-time friend in the coaching fraternity had passed away. 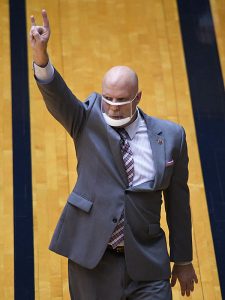 With his surging Roadrunners preparing for a weekend home series against Florida Atlantic, Henson on Tuesday talked to reporters on a zoom call about the death of UT Rio Grande Valley coach Lew Hill.

“Probably be hard for me to talk about it very much, to be honest,” Henson said. “Just devastating news on Sunday.”

Hill, 55, died a day after coaching his last game. In his fifth season as coach of the Vaqueros, his team lost 77-75 on Saturday night at Texas Southern. School officials announced the coach’s death Sunday night. The cause of death wasn’t known.

The coach’s passing hit his friends at UTSA hard.

Henson had worked for 12 years with Hill on Lon Kruger-led coaching staffs at UNLV and Oklahoma. Assistant Mike Peck had been with Hill on the UNLV staff. Another UTSA assistant, Scott Thompson, worked under Kruger and with Henson and Hill for five seasons with the Sooners, highlighted by a 2016 trip to the Final Four in Houston.

“Twelve years together,” Henson said. “Very, very good friends. He was a good man. It’s really, really heartbreaking. Stayed in very close contact with him. Talked to him pretty regularly. He was dealing with some health issues. Breaks my heart. To watch him … continue to grow, he was such a mentor to the players.

“He had a reputation as a very good recruiter, which he was.

“But after the kids landed in our programs at UNLV and Oklahoma, he was terrific mentoring them. He was a father figure to those who needed a father figure. He grew as a coach. He grew as a man … It’s heartbreaking. We lost a good coach and a great man. Our prayers are with (his wife) Renee and all of his family.”

After the 2015-16 season, Henson, Peck and Thompson came to UTSA, while Hill got the head coaching job at UT Rio Grande Valley.

Hill made five-win improvements in each of his first three years, culminating with a 20-win season in 2018-19 that saw the Vaqueros win an NCAA Division I postseason games for the first time while hosting two rounds of the CIT.

For his efforts, Hill was a finalist for the 2019 Ben Jobe Award, presented annually to the top minority coach in Division I men’s basketball. In total, the Vaqueros made two postseason appearances under Hill, including an appearance in the 2018 CBI.