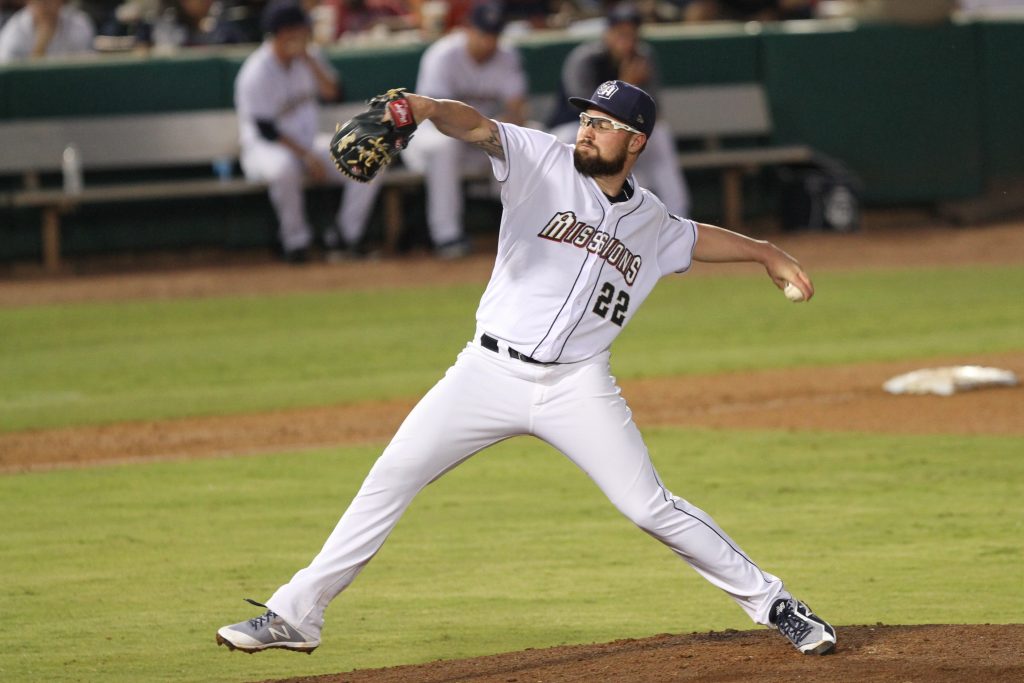 Lefthander Logan Allen has forged an 8-5 record and a 2.78 earned run average to emerge as one of the top pitchers in the Texas League. (Courtesy photo, San Antonio Missions)

Philip Allen can’t walk, can’t talk and can barely see. Afflicted with severe cerebral palsy since he was an infant, Philip has struggled physically ever since.

But that doesn’t necessarily mean that the older brother of San Antonio Missions pitcher Logan Allen doesn’t feel joy and can’t have a good time when the occasion calls for it.

Allen, one of the top pitchers in the Texas League, made sure of that on Saturday when he sent out a tweet directed to Philip.

“Happy 31st Birthday to the best big brother I could have ever asked for!” Logan wrote. “I thank God every day for you! I love you, Philip.”

Especially poignant in the tweet was a hashtag that said simply, “What handicap?”

A few days ago, Logan Allen, 21, sat in the dugout at Wolff Stadium and talked at length about his tightly-knit family, based in Asheville, North Carolina.

About how much he appreciates his parents.

About how he connects with his younger brother, Bryson, age 17. And about Philip, who has shaped his life in so many ways.

“He’s the best person in the entire world,” Logan Allen said last week. “He’s always happy. He’s never sad. Everything’s always great. He definitely is someone I look up to.

“He’s also an inspiration, a reminder every day, that you don’t get these opportunities (all the time), and there’s a million people in the world that wish they could be where you are.”

When Philip was diagnosed as an infant, physicians worried that he wouldn’t have long to live.

Even though the journey has often been painful, he has lived for more than three decades now and beats the odds on a daily basis.

Missions manager Phillip Wellman said he thinks his No. 1 pitcher draws strength from his older brother’s drive to survive.

“I think that’s part of his overall attitude about life,” Wellman said. “I think he understands how precious these moments are. He’s extremely grateful for the opportunity, and he goes about his business that way.”

Drafted by the Boston Red Sox out of Florida’s IMG Academy in 2015, Allen was one of several minor league prospects shipped later that year to the San Diego Padres for reliever Craig Kimbrel.

With the Padres, Allen has evolved into one of the organization’s top-rated prospects.

He is 15-13 over his last two years, including 8-5 in his first year with the Missions.

On his best days, he dominates, as evidenced by a combined no-hitter at Tulsa on May 31.

Against the Drillers, he pitched seven innings and teamed with Jason Jester for just the 13th no-hitter in the ball club’s history.

Even on his bad days, Allen is pretty good. On Friday night, for example, he yielded three first-inning runs in a 3-2 loss to Northwest Arkansas.

But after the hard-luck first, he settled down to blank the Naturals over the next five innings, artfully painting a low-90s mph fastball on the corners and striking out seven along the way.

“The biggest attribute is his command,” Wellman said. “You know, he can hit a gnat in the rear end. That’s very good. And his changeup is outstanding.

“You know, right now, it’s just a matter of him being young. He’s 21 years old. He lacks timing and experience. That’s what we’re here to give him.”

Some of his athleticism may be a family thing, as his father, Norman Allen, once played professional hockey.

Logan Allen said that Bryson, his teenaged brother, once played baseball and might have evolved into No. 1 talent in the family at that sport.

But with baseball in his rearview mirror, Bryson has since taken up “three-gun” competition shooting.

Grudgingly, Logan admits his younger brother is the best of the brothers when the two go hunting in the offseason.

“If someone’s got to take the shot, it’s definitely him,” he said. “He shoots a little straighter (than I do).”

In an article published in 2016 in the East Village Times, a San Diego sports website, Logan said his parents have always “hyped” his visits to his older brother.

Grinning from ‘ear to ear’

“When I came home and he heard my voice, it was special,” he told writer James Clark. “Seeing his head whip around to look at the door when he heard me call his name. He was grinning from ear to ear and stomping his feet.

“It’s like that every time I walk in the door, and it gives me chills just thinking about it.”

Logan’s relationship has been chronicled in the media more than once, so he does get feedback from the public about it.

“When I talked to people about this, they say, ‘How’d you grow up with that?’ “ he said. “I don’t want people to feel sorry for me. This was never an issue. Yeah, you have people staring and stuff like that.

“But the lessons I’ve learned from him, and he’s never said one word to me, ever, you know. (Because he) can’t talk. But I’ve learned more from him than anyone, I’d like to think…

“Just by him sitting there, smiling, just going through his daily routine. That boy has been through more than I have — 10 times through. It’s incredible.”

Happy 31st Birthday to the best big brother I could have ever asked for! I thank God every day for you! I love you Philip! ?? #whathandicap pic.twitter.com/KNUJPhH9Ln