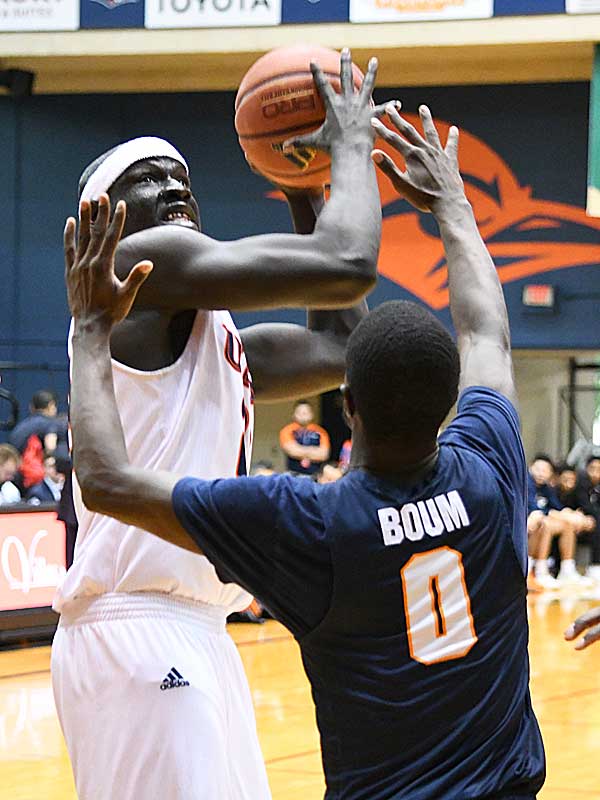 Forward Atem Bior produced a career-high 13 points and pulled down seven rebounds as the Roadrunners improved their record in Conference USA to 3-3. – Photo by Joe Alexander

UTSA coach Steve Henson was grinning slightly as he walked around the perimeter of a media scrum and moved into position for his post-game interview session Saturday afternoon.

Before taking a single question, he had one declaration to make. 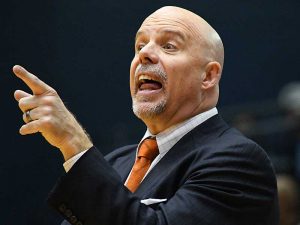 “Fire away,” Henson said. “A dollar for the first one that says, ‘Was that (game) just like Wednesday?’ Yes.”

The teams were the same — the UTEP Miners against Henson’s Roadrunners. The flow of the game was also about the same, with the Miners executing a thrilling second-half rally for the second time in four days.

But, with all due respect, this one was different in an important way.

The Roadrunners won this one, even though they did fritter away most of a 23-point lead before steadying themselves at the end to nail down an 86-70 victory over the Miners.

With the decision, the Roadrunners improved to 8-1 at home and gained a measure of redemption after blowing a 24-point lead and then losing 80-77 to the Miners in overtime at El Paso.

After the game in West Texas, the Roadrunners returned to San Antonio in a funk, having squandered their second golden opportunity in two weeks to win on the road in Conference USA.

Coming home, they knew they had to make amends.

“Just glad our guys bounced back the way they did,” Henson said. “Had two good days of preparation. Weren’t real long practices, but we worked real hard on keeping our legs fresh and making a few adjustments. 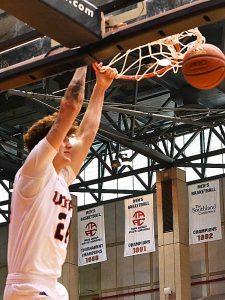 Freshman center Jacob Germany went 4 for 4 from the field, including a highlight-reel dunk. – Photo by Joe Alexander

“Came out and re-established what we’d established in the first half (in El Paso).”

In the first half at El Paso, UTSA looked very good.

After that, everything unraveled, as the Miners roared from behind with separate runs of 17-0 and 8-0 en route to the biggest comeback in school history and the biggest in NCAA Division I this season.

Less than 72 hours later, both teams tipped off in San Antonio, and a season-high crowd of 1,684 fans watched curiously as deja vu started to set in.

With 61 percent shooting, the Roadrunners bolted to a 48-31 halftime lead, and then they emerged from the dressing room after intermission with equal intensity.

They continued to apply pressure on the Miners, hiking the advantage to 62-39 when Atem Bior scored on a bucket in the paint.

At that point, just as they did a few nights ago, the Roadrunners got careless with the ball, started turning it over at an alarming rate and allowed the Miners to rally. 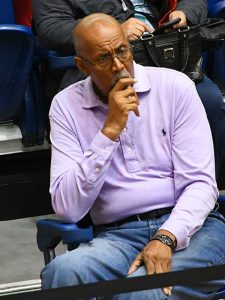 Texas basketball legend Nevil Shed takes in Saturday’s game at the Bird Cage. He played for the 1966 NCAA champion Miners of Texas Western College (now UTEP) and later became an assistant coach and an administrator at UTSA. – Photo by Joe Alexander

UTEP capitalized on five turnovers, blitzing the home team with a stunning 19-2 run over the next five minutes.

All of a sudden, in a game that looked lost, the Miners had life — down by six with 7:25 remaining.

“To be honest, it felt worse tonight, than it did on Wednesday,” Henson said of the UTEP comeback. “On Wednesday, it wasn’t like we totally lost our composure.

“Tonight, it was. We were throwing that ball around, making weak plays. It was very, very similar.

“…What happened (in El Paso) was in our minds a little bit. So, yeah, the wheels came off. But, we regrouped and finished the game better.”

Aided by big plays from Jhivvan Jackson, Keaton Wallace, Luka Barisic and Makani Whiteside, the Roadrunners constructed a 17-6 run to put the game away.

A couple of Jackson free throws with 1:54 remaining capped the streak and widened the lead to 81-64.

Winless on the road in the C-USA at 0-3, UTSA plays next at North Texas (on Thursday) and at Rice (next Saturday.) Both with a tip off at 7 p.m.

UTEP guard Nigel Hawkins drives inside for a left-handed layup early in Saturday's game. The UTSA Roadrunners held off Hawkins and the Miners, 86-70. https://t.co/hyCDEtJ4sq pic.twitter.com/ox4r0niPJW

UTEP — Bryson Williams produced 21 points on 9 of 17 shooting, 7 rebounds. He had 34 points Wednesday night. Souley Boum scored 18 points. Not counting Williams, the Miners hit only 16 of 53 shots from the field (30.1 percent). Guard Daryl Edwards, who hurt the Roadrunners in El Paso, scored only three on 1 of 10 shooting.

UTSA — It’s notable that the Roadrunners beat a good team on a day when they made only six three-point shots. Known for their long-distance artistry, they were 6 of 20 from three. They made up for it with strong play from big men Atem Bior (13 points, 7 rebounds), along with Jacob Germany and Luka Barisic (both with 9 points).

UTSA's Jhivvan Jackson passes out of traffic on the wing and into forward Atem Bior, who sinks a hook shot on the UTEP Miners. Roadrunners, 48-31, at intermission. https://t.co/hyCDEtJ4sq pic.twitter.com/DVCZKriSMZ

The highest-scoring tandem in Division I combined for 44 points. Jackson produced 23 points, seven rebounds and five assists. Wallace scored 21, and also had eight rebounds, three assists and two steals. Jackson was off the mark with his shooting touch (5 of 14), including a missed layup late in the game, but he sank 12 of 12 at the line. Wallace hit 8 of 18 from the field.

Keaton Wallace drifts to his right and then buries a three late in the first half. UTSA, 46-30. w / 0:29. pic.twitter.com/sADKePQvng

Wallace scored 16 points and Bior came up big with 11 points and five rebounds, leading the Roadrunners to a 48-31 advantage at the break. UTSA played strong defense, limiting the Miners to 35.3 percent shooting. UTSA also won the battle of the boards, 23-16. On the offensive end, the Roadrunners sizzled at 61.3 percent. UTSA hit eight of its last nine shots before intermission.

After the Miners pulled to within six, Barisic stopped the run with a three-point play. Later, the Miners had it down to nine when Whiteside nailed a three from the arc to make it a 12-point game with 4:30 remaining. From there, UTSA never allowed UTEP to cut the lead under 10. Jackson made sure of it by hitting six of six at the free throw line in the last two minutes.

Jhivvan Jackson snakes inside for a floater. UTSA, 48-31 at the half. https://t.co/hyCDEtJ4sq pic.twitter.com/bd0wc8xETl