Jordan Thompson likely will always remember his first at bat in the NCAA baseball tournament.

The former standout at Boerne Champion High School hit a two-run homer in the second inning Friday to help ignite the Texas A&M Aggies in an 8-2 victory over the Oral Roberts Golden Eagles.

Thompson, a San Antonio native, added a single to give him two hits in the opening game of the College Station regional. 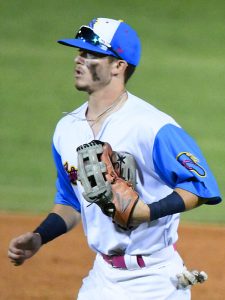 At 6 feet and 175 pounds, Thompson packs quite a wallop with his bat, and he proved that in the bottom of the second. With the Aggies trailing 1-0, Brett Minnich hit a double to get A&M started.

Thompson then unloaded with a blast that carried over the left field wall.

Playing their first NCAA game under first-year coach Jim Schlossnagle, the Aggies made it 3-1 in the fifth inning and then 6-1 in the seventh on Austin Bost’s three-run homer.

In a two-run eighth for the Aggies, Thompson struck again. He singled and eventually scored on a Jack Moss’ double. All told, Thompson finished his day two for four, with two runs scored and two RBI.

Not bad for a player that wasn’t heavily-recruited out of high school.

Thompson played as a freshman at the University of the Incarnate Word. He moved on in his sophomore year to toil at Grayson College. With the season cut short by the Covid-19 pandemic, Thompson looked for his next opportunity and found it with the Flying Chanclas de San Antonio.

So, in the summer of 2020, with much of the nation locked down in quarantine, he played with the Chanclas in the Texas Collegiate League to hone his skills and to prepare for his first season with the Aggies.

“My journey to get (to A&M) was a little unconventional, but it’s my journey, and I wouldn’t change it for the world,” he told The JB Replay on the eve of the TCL season. “Going from UIW, a coaching staff change, leaving to go to Grayson, then going on to Texas A&M, I love my story. 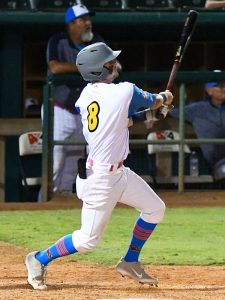 Jordan Thompson takes a big swing at a pitch in 2020 with the Flying Chanclas. For fans in San Antonio at Wolff Stadium, the Chanclas were the only show in town that summer after officials canceled all levels of affiliated professional ball at the minor-league level. – Photo by Joe Alexander

“I’m just really excited to be where I want to be. It’s every kid’s dream to go to a Power 5 conference, (to) Texas A&M especially.”

Thompson has seen it all in terms of the business of college baseball.

He has experienced two coaching changes. In 2019, after his freshman year at UIW, coach Pat Hallmark left to take a new job with the UTSA Roadrunners. At the end of the 2021 season, just as Thompson won the Wally Moon Award as the Aggies’ most improved player, his world was rocked again.

Rob Childress, the coach who brought him to College Station, was dismissed and Schlossnagle was hired.

With the former head coach at TCU now in charge in Aggieland, Thompson didn’t flinch. He adapted to the change, stayed with it and played in 39 of the Aggies’ 56 games this season, starting 28 of them. Thompson hit a modest .253 with four home runs and 22 RBIs.

But, as Oral Roberts now knows, one of the smallest players on the A&M squad can play at the major college level, and he can achieve on the big stage of the NCAA tournament.

“He has been the ultimate team guy and ready to perform when called upon,” Schlossnagle told reporters on the eve of the regional. “That’s how you put together special seasons.” 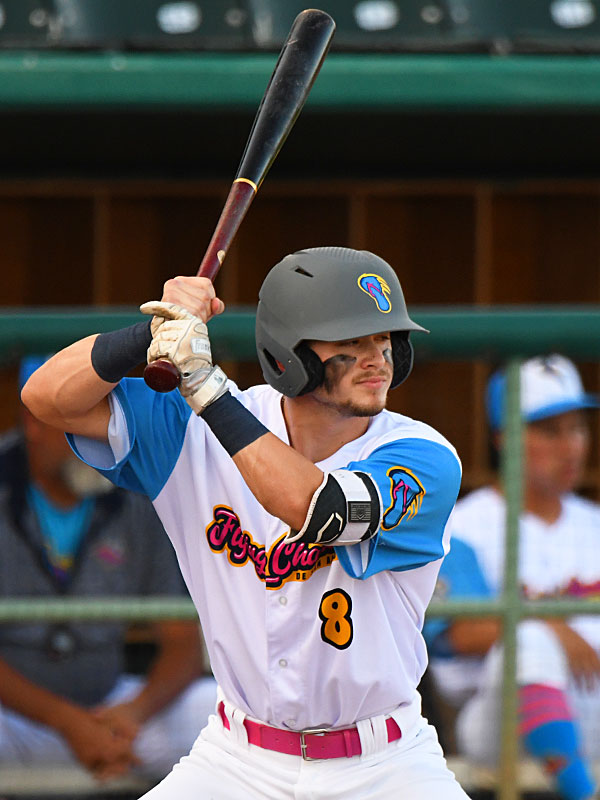 Jordan Thompson played outfield for a Flying Chanclas team that included the likes Kite McDonald (from Antonian and Mississippi State) and Porter Brown (from Reagan and TCU). – Photo by Joe Alexander