What a performance from these two this afternoon 👏#The150thOpen pic.twitter.com/nyRQO6JnbY

They’ll try to match the intensity on Sunday, with the coveted Claret Jug trophy and a major championship hanging in the balance. Both will enter the final 18 holes of the tournament tied for first at 16 under par.

Still clinging to championship hopes, Cameron Young and Cameron Smith (both -12) remain in the title picture, as do Scottie Scheffler and Si Woo Kim (-11).

Because of McIlroy and Hovland’s position atop the leaderboard, both will be paired together, just as they were on a memorable Saturday.

“It’s nice I get to play with Viktor again,” McIlroy told NBC news. “It’s a comfortable pairing for both of us, and I’m looking forward to that. But, yeah, I’ve kind of been knocking on the door for awhile (in major championships).”

The pressure would seem to be more pronounced for McIlroy, 33, a legendary name in the game from Northern Ireland, who is playing in front of a crowd that has been chanting for him all week.

Hovland, 25, a native of Norway who played at Oklahoma State University, is trying to win his first major.

This would seem to give the edge to McIlroy, who has been in pressure situations more often.

Then again, he hasn’t won in one of golf’s four majors since 2014 when he claimed titles at both The Open, formerly known as the British Open, and the PGA.

“This is the best chance I’ve had in a long time,” McIlroy said on NBC’s afternoon telecast. “I just need to stay in my own little world for one more day and hopefully I can play the sort of golf that’s good enough to win.”

A teammate of Hovland on the 2021 European Ryder Cup team, McIlroy authored the shot of the day. It came after he made a potentially disastrous mistake and sent a ball into a green-side bunker.

But from the sand, McIlroy blasted out brilliantly with a shot that took a few bounces on the green and rolled into the cup for eagle.

“As soon as I hit the bunker shot I knew it was going to be close,” McIlroy said. “I didn’t imagine it was going to go in. Sometimes you need little bits of luck like that to go on and win these types of tournaments.

“That was a real bonus. I played well from there on in. Definitely the highlight of the day.”

Hovland started to get extremely hot on the front nine when he birdied four holes in a row. But after McIlroy seized momentum with the eagle on 10, the former Big 12 Player of the Year at Oklahoma State responded with a birdie on the same hole to tie.

Playing with confidence and feeding off the crowd, McIlroy kept applying pressure, taking a one-shot lead with another birdie on No. 14.

“It kind of felt like match play,” Hovland told NBC. “I didn’t try to think of it that way. You know, regardless of whether he made his putt or missed his putt.

“That wasn’t going to change what I was doing. I knew I just needed to play good golf and I was really happy that I was able to shoot a bogey-free round today.”

McIlroy made his biggest mistake of the day on No. 17, the famous road hole, when he hooked into the rough off the tee.

From there, he hit a ball that bounced on the fairway, and kept bouncing until it hit a wall short and way to the right of the green.

While Hovland made par, McIlroy notched his only bogey of the day to fall back into a tie for first.

On No. 18, it stayed tied way as both birdied to put them at six under for the day. Hovland vowed that he’d take an aggressive approach to the last round.

“I’m going up against one of the best players in the world,” he said. “Certainly not going to hold back, because I know he’s definitely not. I’ll probably need to play more like I did today and, yeah, hopefully that gets the job done.”

Rookie Cameron Young, who emerged on the world’s golf stage in May with a tie for third at the PGA, added another impressive performance in a major on Thursday with an eight-under par 64 for the first-round lead in the 150th Open Championship. 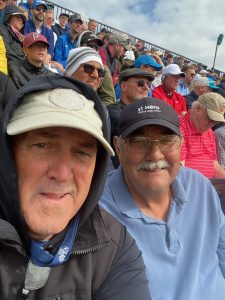 U.S. travel partners John Conway (at left) and Tom Reiter take in the first round of the 150th Open Championship on a cool day in Scotland. Reiter has been filing essays, journals and photos for The JB Replay. — Photo special

Young recorded eight birdies and no bogeys on the par-72 Old Course at St. Andrews, Scotland, to take a two-stroke lead over Northern Ireland’s Rory McIlroy, the second-ranked player in the world.

McIlroy shot a 66. Cameron Smith and Robert Dinwiddie were tied for third at 67.
Eight players were locked at 68, including Masters champion and world No. 1 Scottie Scheffler, a former University of Texas golfer.

Superstar Tiger Woods, playing 17 months after suffering serious injuries in an automobile accident, struggled from the start and finished in the back end of the 156-man field at 78.

Young is a 25-year-old from New York who attended a prep school on the campus at Fordham University and learned the game from his father, David Young, a PGA Tour professional at Sleepy Hollow Country Club.

Cameron Young, who played in college at Wake Fores University, spent most of last year on the developmental-level Korn Ferry Tour. 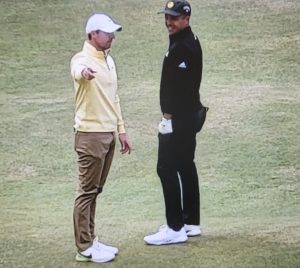 Rory McIlroy and Xander Schauffele confer Thursday during the first round of The Open. McIlroy shot a 6-under 66, while Schaufelle fired a 69. — Photo special to The JB Replay

This year, he’s played a PGA Tour schedule that has included five top-10 finishes, including three seconds. He is ranked 32nd in the world and 18th in the FedEx Cup standings.

According to media accounts, Young was asked about rising to an elite level in the game after growing up in an area of the United States that isn’t known for its golf.

“It might sound a little improbable, but I’ve been around golf my whole life,” he said, quoted in a story by Jacob Camenker of The Sporting News. “That’s just kind of what I do.”