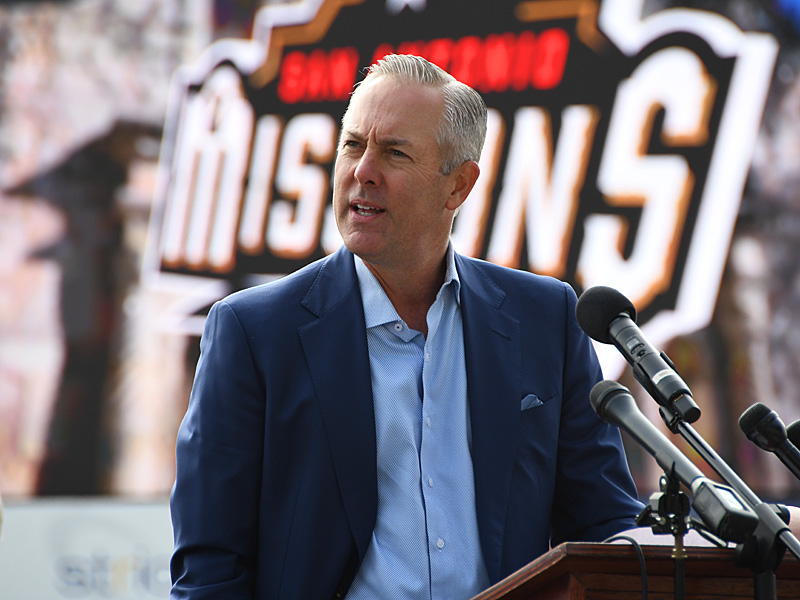 The San Antonio Missions baseball team on Thursday morning unveiled its first local ownership group in almost 40 years, a transaction hailed as one that would secure the franchise’s future in the Alamo City.

The Missions of the Double-A Texas League will continue to play at Wolff Stadium, but it has also been widely speculated that a new downtown facility and the potential for a move back to Triple-A could be on the horizon.

The price tag for the franchise was reported at $29 million by Baseball Digest.

For the first time since the late Tom Turner Sr. owned the franchise from 1979-86, the Missions will operate under local ownership. Elmore, a California-based travel industry executive, purchased the franchise in 1987 and ran it for 34 years starting in the summer of 1988.

Ryan Sanders Baseball, owned by the families of baseball Hall of Famer Nolan Ryan, CEO Reid Ryan, and Don Sanders, will join Designated Bidders as owners and operators of the Missions.

Reid Ryan, the son of the former major league pitching great, will oversee a Missions front-office that will include longtime team president Burl Yarbrough and his staff.

Local elected officials hailed the ownership transaction at a news conference near home plate at Wolff Stadium, the team’s home field since 1994.

“This is a long-time coming,” said outgoing Bexar County Judge Nelson Wolff, the stadium’s namesake. “I’m glad to see it did get done before the year was over. It’s something a number of us have pushed for, for a long time. To get fan support, do the right thing for baseball, you need local ownership, people that have given back to the community.

“We’ve got a great ownership group, every one of them. Every one of them have made contributions to the community. I think they’re well respected. That’s what it takes to build a successful franchise.”

Ryan Sanders Baseball has long been recognized as a leader in minor league sports.

The group founded the Round Rock Express and built Dell Diamond in 2000. It also founded the Corpus Christi Hooks and developed Whataburger Field in 2005. Both Reid and Nolan Ryan have extensive experience with MLB. Nolan Ryan served as the Texas Rangers’ CEO from 2008-13 and Reid Ryan worked as the Houston Astros’ president of business operations from 2013-19.

The Missions first played in 1888. A franchise that has produced the likes of Brooks Robinson, Billy Williams, Joe Morgan, Fernando Valenzuela, Orel Hershiser, Mike Piazza and Pedro Martinez has been a Double-A team for most of that time.

In 2019, they played one season in Triple A in the Pacific Coast League, followed by the next season when they were forced to suspend operations in the wake of the Covid-19 pandemic.

As the pandemic subsided, the Missions returned to play in 2021 at the Double-A level, having to make a move down in the wake of a new agreement between minor and major league baseball. Concerns about an aging stadium that didn’t meet new specifications were cited as a factor.

The Missions are an affiliate of major league baseball’s San Diego Padres.

Smith talked to reporters after making opening remarks and fielded questions about the possibility of a new stadium.

In addressing reporters, Smith said stadium planning will be a focus of the new group in coming months. Asked how much land it would take, he cautioned that “there has been no site selected.”

“There is no plan,” he added. “The plan has strictly been, let’s have local ownership. That is the only way this will stay in San Antonio long term. So that was step one.

“A fully developed plan for a ballpark is definitely next on the agenda, and to answer your question around how many acres are required, is kind of like asking how long is a rope.”

“The smallest site for a new ballpark is actually kind of amazing,” he said. “It’s in El Paso, home of the Chihuahuas, and it sits on just over five acres. But that is five acres shaped by the hand of God himself.”

Southwest University Park opened in 2014. It cost a reported $72 million. Smith said El Paso’s tract of land was “the perfect shape for a ballpark.”

“Most new ballparks range between seven and eight acres,” he said. “But it’s far more about the dimension. There’s an optimal orientation for a ballpark. You can have a 10-acre site that doesn’t work and a five-acre site that’s perfect.”