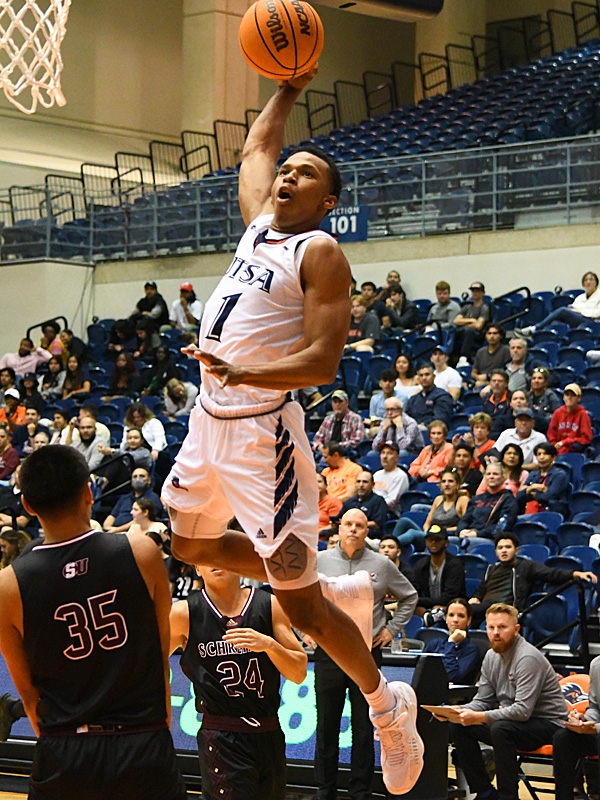 High-flying point guard Japhet Medor passed for 10 assists and made four steals for the Roadrunners in an exhibition against the Schreiner University Mountaineers. – Photo by Joe Alexander

In the wake of an opening burst of energy from the Schreiner University Mountaineers Wednesday night, fans of the Kerrville-based Division III men’s basketball program took full advantage of the opportunity.

They cheered with gusto when Schreiner’s Jackson Reid hit a three for the first points of the game. 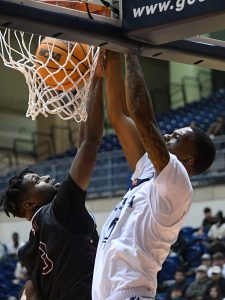 Josh Farmer came off the bench for 10 points and four rebounds and sparked a Roadrunners rally early in the first half. – Photo by Joe Alexander

They applauded again when Reid, from New Braunfels High School, assisted on another trey by Darian Gibson that staked the Mountaineers to a one-point lead nearly four minutes into the exhibition against the Division I UTSA Roadrunners.

The dysfunctional start for UTSA didn’t last long. The Roadrunners made some substitutions, cranked up their defense and outscored the Mountaineers by 28 points in the last 16 minutes of the half en route to an easy 93-60 victory.

“We gave up some strong-side, drive-kick threes,” he said. “We can’t give up those corner threes. The ones where they beat us to the outside and they helped across, that’s a little different. We got to get our rotation a little sharper on that.” 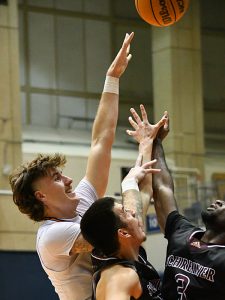 Roadrunners center Jacob Germany contributed 15 points and nine rebounds. The Mountaineers had no answer for his length at 6-feet-11. – photo by Joe Alexander

Part of the problem early stemmed from Schreiner running motion offense that the Roadrunners hadn’t seen during preseason camp.

“They ran some good motion … and they had us on our heels a little bit,” the coach said. “Had a little too much dribble penetration. We had certain lineups that did a terrific job. We subbed those three big long guys in the game early and right away we got three consecutive stops.”

“That was an exciting lineup for us,” Henson said. “Just got to take some more steps defensively.”

Offensively, the Roadrunners showed some positive signs, and it was a good thing to see for home-crowd fans who grew weary last year of watching a clunky offense that averaged only 67 points a game.

Against Schreiner, the Roadrunners’ unveiled a maestro at point guard in Japhet Medor, who made beautiful music most of the night against the outmanned Mountaineers.

Medor, in his first game at UTSA, passed for 10 assists against only one turnover. He also came up with four steals, all in only 20 minutes.

Altogether, the Roadrunners passed for 18 assists on 34 field goals and shot a good percentage from the field (51.5 percent) and from three (42.9).

“Oh, man, just to see a different opponent was everything that we’ve been waiting for,” guard John Buggs III said. “It was a great feeling. Long time coming for all of us.”

Also making his UTSA debut, Buggs scored 17 points, including 11 in the second half, and led five players in double figures.

Even though Schreiner was no match for the home team athletically, UTSA felt good about a night when the team hit 12 of 28 from beyond the arc.

Buggs made five of them, while Isaiah Addo-Ankrah hit four and freshman D.J. Richards knocked down three.

A five-point sequence unfolds for UTSA in the last 30 seconds of the first half. Isaiah Addo-Ankrah hits a three. Japhet Medor forces a turnover and Jacob Germany finishes with a 2-handed stuff. https://t.co/hyCDEtJ4sq pic.twitter.com/27qIkGBEkq

The UTSA Roadrunners were decidedly out-of-sync early Wednesday night in their first showing of the season in front of the home fans. In an exhibition against the Division III Schreiner University Mountaineers, they scuffled a bit and fell behind by a few points. But after that, they stoked their competitive fire and rolled to a 56-29 lead at intermission. UTSA’s starting five included Jacob Germany at center, and he was flanked by Addo-Ankrah, Erik Czumbel, Buggs and Medor. It’s a small lineup, indeed, as the five stand 6-feet-11, 6-7, 6-3, 6-2 and 6 feet, respectively.

With UTSA in attack mode, freshman DJ Richards buries a three from the corner off an assist from senior Japhet Medor. https://t.co/hyCDEtJ4sq pic.twitter.com/oSgKOG6RhN

Germany and Addo-Ankrah led the Roadrunners offensively in the first half. While Germany was scoring 15 points on the inside, Addo-Ankrah made all four of his shot attempts — all of them 3-pointers — to finish with 12. Medor, in his first game in front of the home fans, pressed the attack and dished out seven assists. Medor also had two steals.

The Roadrunners will play their season opener on Monday night, hosting the San Antonio-based Trinity Tigers. 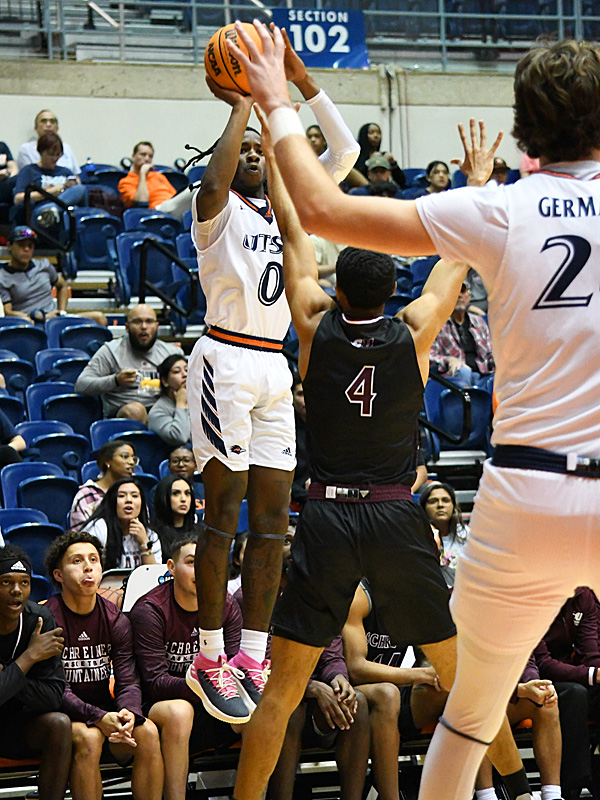 John Buggs III made his UTSA debut and led the Roadrunners with 17 points. He hit five 3-pointers. . – Photo by Joe Alexander