Early Friday morning in Scotland, a light rain fell softly, leading to a reshuffling of the leaderboard at the 150th Open Championship. By mid-afternoon, cheers from the fans deluged one of golf’s greatest players.

A few hours after Dustin Johnson and a few others seized an opportunity to make a raft of birdies, legendary Tiger Woods took a walk up the 18th fairway. He was drenched in admiration from the fans on the Old Course at St. Andrews.

Cheering wildly, the paying customers hailed the 46-year-old Woods not only for his valiant effort to overcome crippling injuries suffered in an automobile accident 17 months ago, but also for his excellence, and for the memories he has supplied over the past 25 years.

In a television interview after the round, Woods, a winner of 15 major championships, shrugged off the fact that he had missed the cut and that he struggled mightily with his game over the past two days.

“Anytime you get a chance to come back and play the Old Course, in the Open, it’s just special,” Woods told a reporter for NBC television. “It really is.

“I’ve been lucky enough to be doing this since 1995. I don’t know if I’ll be physically able to play another British Open here at St. Andrews. I certainly feel like I’ll be able to play more British Opens.

“But I don’t know if I’ll be around when it comes back around here.”

The Open is one of golf’s four majors. It rotates between other courses in and around Great Britain. Reportedly, the soonest it could come back to St. Andrews would be in 2027.

Woods acknowledged that the ovation on perhaps his last walk up the 18th fairway touched his heart.

“The warmth and the ovation at 18, it got to me,” he said. “It was just incredible, just the amount of understanding and respect from all the people in this event, (all of them) that come out and support it. (From) the players.

“The nods I was getting as the players were going out (on the course). I looked over there and, you know, Rory (McIlroy) gave me a tip of the cap. JT (Justin Thomas) did the same. It’s just, there’s something to it, that’s just different.”

Woods, whose play has been sporadic this year in coming back from the injury, admitted he is “a little ticked” that he doesn’t get to play the final two rounds of the tournament.

“I fought hard, and unfortunately, I just could never turn it around. I struggled with the greens again today. I could never hit putts hard enough. I was leaving them short again. So, consequently, I didn’t make enough birdies.”

Thanks again to U.S. golf fans Tom Reiter and his friend John Conway, who have been on the scene in St. Andrews since Monday. Both have worked to supply fans in San Antonio with original content from The Open. 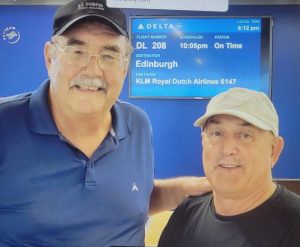 Reiter, who in the 1970s served as the editor of The Ranger at San Antonio College, has been sending essays and journals. Both have forwarded photos. Great work by a dynamic duo.

A rainy Friday morning in Scotland, along with softer fairways and greens on the Old Course at St. Andrews, apparently proved beneficial to a host of golfers, who charged up the leaderboard early on the second day of the tournament.

Johnson made the most of the situation, rallying from four shots behind at the start of the day and into a one-shot lead midway through round two. Johnson opened with a first-round score of 68 on Thursday and then backed it up with a 67.

With the performance, the name of the LIV Golf series standout moved atop the leaderboard at nine under par.

“I played really well,” Johnson told a NBC television news reporter. “I think I hit all the greens. I had a lot of really, really good looks at birdies. I missed quite a few short ones. But I made some nice putts, too.”

The Swilcan Bridge on the Old Course at St. Andrews, Scotland, is thought to be 700 years old. It was built originally for shepherds herding livestock. The 30-foot bridge, made of stone, remains as one of golf's iconic images. https://t.co/hyCDEtrt3Q pic.twitter.com/l58c3Ypc8l