With Porter Brown producing a two-RBI single and left-hander Austin Krob surviving some shaky moments to emerge as the winning pitcher, the third-ranked TCU Horned Frogs protected their lead in the Big 12 baseball race with a 2-1 victory over the Texas Longhorns.

Both Brown and Krob played in San Antonio last summer with the Flying Chanclas, a first-time entry in the wood-bat Texas Collegiate League.

Playing on a bigger stage Saturday, both helped lift the Frogs one step closer to a conference regular-season championship.

In the second inning, Brown hit a two-out single up the middle off Texas starter Tristan Stevens to score Tommy Sacco and Elijah Nunez.

Brown is a redshirt freshman from Reagan High School. He finished 2 for 4 at the plate to increase his batting average to .359. He also hiked his RBI total to 17 in 25 games played.

Krob, a sophomore from Lisbon, Iowa, ran his win-loss record to 7-0. He worked 5 and 2/3 innings and allowed one run on six hits. Krob walked four and struck out three.

Marcelo Perez and Haylen Green each pitched 1 and 2/3 innings of scoreless relief to nail down the victory.

If the Longhorns come up short in the title race, they may look back on three base-running issues in Saturday’s game, one in each of the first three innings.

In the first, Zach Zubia was thrown out by a wide margin as he tried to go first-to-third on a single to right field. In the second inning, Cam Williams was on third base and strayed too far off the bag on a chopper back to the mound. He was caught in a run-down and tagged out.

In the third, Texas had a rally going and scored its only run of the game on a play that started with Texas runners on first and second and a fly ball to center. It ended on an error, an errant throw that came in from Nunez in center and allowed Mike Antico to race all the way around from second to score.

But on the next play, the Longhorns helped kill the rally when Mitchell Daly was caught in a run-down between second and third base.

Marcelo Perez, from Laredo, was also a member of the Flying Chanclas last summer. On Saturday, he allowed one hit and no runs in 1 and 2/3 innings. A big moment came in the sixth when he struck out Texas’ Trey Faltine to end the inning with two runners on base. Both Krob and Perez worked under Flying Chanclas pitching coach Calvin Schiraldi, a former star at Texas in the early 1980s.

Brown sat out most of last summer’s games with an injury. Nevertheless, he had drawn the praise of manager John McLaren after getting off to a hot start as a hitter. Brown has spent some time on the bench with the talented Horned Frogs this season, including Friday’s series opener against Texas. 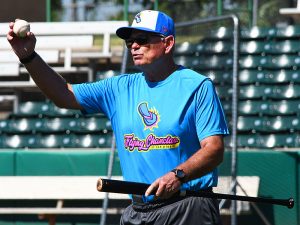