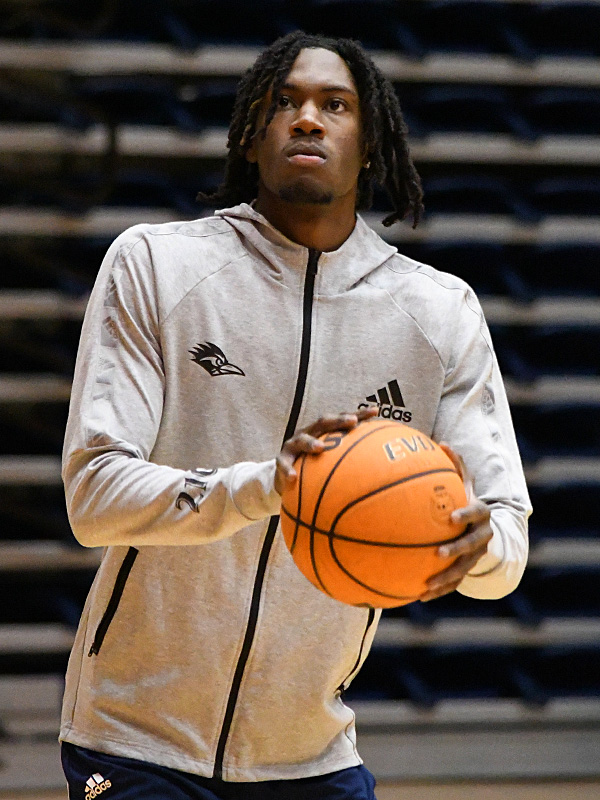 Will promising center Carlton Linguard Jr. play for the UTSA Roadrunners this season? If he is cleared, it could alter the team’s trajectory in a positive way leading into Conference USA play in a few weeks. — Photo by Joe Alexander

Coaches and players within the UTSA men’s basketball program on Tuesday afternoon caught a brief glimpse of the future. The image of 7-foot center Carlton Linguard Jr. leaping off the floor to throw down a resounding dunk was an eye-opening visual, for sure.

Eye opening and memorable. When Linguard elevated, observers at practice could see that his reach extended to the middle of the backboard square. 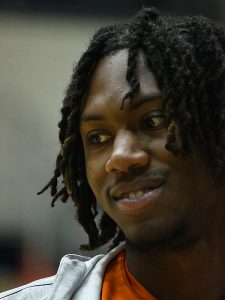 Seven-foot Carlton Linguard Jr. played the past two seasons at Kansas State in the Big 12 conference. – Photo by Joe Alexander

This time, though, the visual also came with audio. As he descended back to the court, the force of his two-handed jam created sound effects. You know, the sound that a collapsing rim makes in an empty gym just before it snaps back into position.

As Linguard completed the play and turned to run to the other end of the floor, some confusion was evident. What in the world just happened? Then, suddenly, his teammates let out a hearty cheer — in unison — for the well-traveled former standout from San Antonio’s Stevens High School.

For a program still languishing in the nether regions of the NCAA Division I NET rankings, it was a thrilling moment. But it was also a happening that arrived with some uncertainty. While Linguard is clearly getting closer to being in game shape, he also faces a few more important questions.

First, will the former Kansas State Wildcats center be allowed by the NCAA to play for the Roadrunners this season? If so, when? In a few more weeks, at the semester break, perhaps? Or, will it be next fall, when UTSA starts play in the American Athletic Conference, after a 10-year run in Conference USA?

Important questions, indeed, for a program that has been down the past few years. In an interview Tuesday afternoon, UTSA coach Steve Henson opened up about Linguard’s situation, acknowledging initially that the big man has looked good in recent practices.

“Yeah, it’s been fun watching him,” the coach said.

Since early in the fall semester, it’s been tough for neutral observers to tell exactly what the team had in Linguard. With his left knee issue, he initially was relegated to individual drills on the side of the court.

As official practices opened in late September, Linguard was doing a little more, and then as weeks passed he began to work out some with teammates in halfcourt drills. Last Friday, he started to run up and down the court in five-on-five, full contact practices. Since then, Linguard has engaged in four full workouts.

“He’s improved a lot in the last week and a half,” Henson said. “You know, a lot of that is conditioning and the confidence that goes with conditioning. Probably having that knee feel good for the first time in a long time adds to the confidence factor. He’s been pretty impressive.”

At times during his comeback, Linguard’s presence on the offensive end has been most noticeable. He can move around in the post area with his back to the basket and he can also spot up and shoot threes pretty comfortably. Asked what he does best, Henson initially mentioned his potential on defense.

“You notice him when he’s in there. Guys who get penetration and are used to finishing down in there, he’s challenging those shots. He just plays noticeably bigger than our other big guys.”

But, as mentioned, Linguard has other hurdles to clear before coaches can even begin to think about including him in a game plan. Technically, he is academically ineligible, and UTSA will need to get a waiver from the NCAA for him to play this season.

Also, the appeals process is only in the discussion phase right now. So, even though fall semester final exams will conclude at the end of the week, don’t expect Linguard to be on the floor when UTSA (5-3) opens a road trip on Saturday against the undefeated University of New Mexico Lobos (8-0).

Henson seemed reluctant even to speculate on when he expected to learn whether Linguard can play this year. “I don’t know if it’s between semesters, or what,” the coach said. “There’s nothing really we can do about it. We can push and ask and all that, but I don’t have any idea.”

Even though the school’s compliance office has been contacted on the matter recently, nothing has been filed with the NCAA.

“We were talking with compliance the other day on the best way to go about it,” Henson said. “We trust them. They know how it works. We’re kind of monitoring the semester and all that and monitoring his health along the way, as well … Hopefully we can get something submitted (to the NCAA office) very soon.”

Whatever happens, Linguard is expected to play for the Roadrunners at some point. After high school at Stevens, he played one year at Temple Junior College, where he attracted attention from high-major basketball programs, and then the last two at Kansas State.

So, it is UTSA’s thinking that if he is allowed to play after the semester break, then presumably he’d have just one year of eligibility remaining in 2023-24, but if he can’t play this year, then he’d have two years, through 2024-25.

Likely, players on this year’s team would love to have him back as soon as possible.

You can sense that much by the sight of him running up and down the floor in practice, by the look of excitement on players’ faces and by the cheers that echoed through the Convocation Center after one certain play above the rim Tuesday afternoon.

“Jacob’s just having some precautionary tests,” Henson said. “He got checked out this morning. Hoping to get the doctor to look at the results as soon as possible. Obviously we’d like to have that happen today. But I can’t guarantee it will.

“If not, hopefully (by) Monday morning. We’re as anxious to find out his status as anybody else because we start practice Monday (afternoon). So, that’s really all I have.”

Germany, a 6-foot-11 senior, sat out UTSA practices on Tuesday and Thursday. Henson characterized the setback as an illness, but he didn’t elaborate, saying only that it’s not believed to be Covid-related.

Germany’s health question comes just as the Roadrunners prepare to ramp up preparation for the coming season.

Since the start of the fall semester in late August, players were on an eight-hour per week regimen, mixing weights and court time. Next week, preparation time increases to 20 hours per week.

In the past week, UTSA practiced Monday, Tuesday and Thursday. They were given the day off on Friday.

Henson said he likes the vibe around this year’s team.

“It’s a fun group to be around every day.”

As for the overall health of his team, a lot depends on the status of Germany, who led the Roadrunners last year with 15.2 points and 48.8 percent shooting. Also, 7.3 rebounds per game.

Seven-foot center Carlton Linguard, Jr., a transfer from Kansas State, won’t participate in workouts for the time being. The former Stevens High School standout is rehabilitating a knee injury.

Forward Aleu Aleu, knocked out with a knee injury last January during his first season at UTSA, has been one of the bright spots for Henson lately.

Aleu didn’t participate in contact work in the summer, but the multi-skilled 6-foot-8 forward now seems to be rounding into form.

“Aleu had good practices Tuesday and Thursday,” Henson said. “Looked like he’s feeling better. He ran today, so it was good to see him get some conditioning on turf.”

UTSA will have six weeks to prepare for the season. The Roadrunners will play an exhibition on Nov. 2 at home against Schreiner College. They’ll open the regular season at home on Nov. 7 against Trinity.